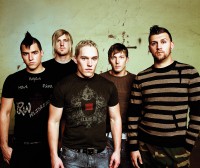 BEC RECORDINGS will be releasing on 10th November the new album 'Alpha/Omega' by pop rockers Kutless. Read a press release, "Kutless has created a collection of rock and worship songs of both original and cover tracks that are true to who the band has been for the last 17 years. They wanted to create a project that would engage the Christian community and have the greatest impact. The songs are true to who the band is at their core - rock and worship."