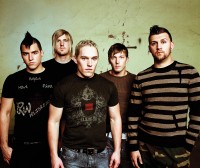 With the latest live album by Oregon rockers Kutless high in the US Christian charts now seemed a good time to quiz the band about their recent activities. I spoke to the band's lead guitarist James Mead.

Tony: So why a live album?

James: We'd obviously played in Portland, Oregon quite a few times because that's where we live and the crowds are just always so amazing there. We had this incredible vision for this tour, the production and everything and we just knew that these songs really lent themselves to a live recording, this would be such a cool thing to do. And actually to be completely honest it's something we thought of doing before we really started doing our first record.

James: Yes. Sometimes we feel that our songs kind of get lost in translation so to speak when recording a CD. All the advances in technology in recording nowadays are awesome but I kind of wish we were still all recording in a live approach and atmosphere. We've always had fans tell us throughout the years "you guys are so much different live." We thought well, maybe we should try and capture that for our fans.

Tony: Some people have criticised 'Live From Portland' because there are no new songs on there. 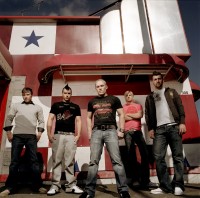 James: That's not completely true. There are four songs on there from the 'Heart Of The Innocent' which at the time of that concert hadn't even been released.

Tony: You caught me on a technicality, sir.

Tony: What is a typical Kutless audience? Is it largely teenage boys?

James: No, it's more 50-50 teenage men and women. We have a wide demographic. When we tour our front row of people can be dudes that are here for rock and roll, girls that like our radio hits, little kids sometimes. We get parents bringing us their five year old kids. My son loves Kutless, he's been listening to us ever since he was in diapers! Our audience is all the way up to 80 year old grandmas!

Tony: Kutless are very much role models for a section of American youth. Is that a pressure for you? 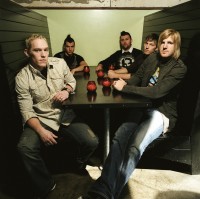 James: It's a comfortable weight. Sometimes the Lord will press in on things in your life that he knows you just have to surrender and submit to him. Even if we didn't ask for it, which we did when we signed up for this, we said, "Lord we will do this." With almost a million album sales now in people's minds we are in a position of leadership. Just the other day in a band Bible study we were looking in the book of 1 Timothy chapter 3 which talks about the qualifications for overseers and the qualifications for deacons. There are some things we just have to submit to the Lord and say, "OK, I'm cool with this being a comfortable pressure."

James: Our opinion on that would be that that would have to be something that would have to happen completely organically. We don't really have plans like, "Hey, let's call up Velvet Revolver and ask if they'll take us on tour." That's not our style at all. It would be more like if the Lord just started putting our songs on certain radio stations and all of a sudden there was just a demand for us to be playing in some more mainstream type atmospheres. So we try to prayerfully consider pretty much every step we take with our careers now. In my mind if you want to say you're a Christian in anything you should let the Lord lead you forward so it's for his glory. So you're protected. We have a lot of friends who are Christian bands who have been touring (in the mainstream) and it's a pretty bad atmosphere. Some bands on the tour are trying to cast spells on them. So for us it needs to be the Lord telling us, "I'm going to put you here and you're going to trust me because I'm going to protect you." We just want to be content with where we are and not hankering for more. Honestly, when we made our first record a scout from Virgin Records came and requested a private showcase of us. We played it and we were rotten . . . But before we played it, as we were talking about how cool it was that this person was coming, it was like, "Well, what if we get signed to Virgin now and this is only our first record? And we sold a million copies of our first record? How amazing would that be?" That's what we thought at the time. But looking back if we had sold a million records back then it would probably have been just one song, there probably would have been so much pressure on us for a second record and we wouldn't have been able to handle that. We probably would have broken up. And now we're five records into our career, we're healthy, we're happy, we're getting paid, which is nice, our families can survive with that and spur us on to keep going. So I'm glad that we didn't have that kind of success at the beginning.

Tony: Can you name a classic Christian record you'd have liked to have played on?

James: I was 17 when I got saved and I literally did not know that Christian music existed before that. However, I listened to some stuff. Stryper was an amazing band, by far the pinnacle of that genre of music back then. Also, my Uncle Mike was actually playing drums in a band with Steve Taylor called Chagall Guevara. Their's was a really, really cool record. I think that would have been a fun record to have played on.

Tony: Final question, what was the last Scripture that impacted you?

James: Well, I think my Christian knee-jerk response would be what I read last night. Let's face it, sometimes we get in the Word just to get in the Word and it's not necessarily life-changing that night but it's a discipline and it's us knowing God's Word and being familiar with Jesus Christ. But something that impacted me yesterday was from the Gospel of Mark, chapter 11 when Jesus was doing the word games with the scribes and the Pharisees. They were asking him questions and he responds, "OK, I'll give you an answer but first let me ask you a question. The baptism of John - was it from God or from man?" They started reasoning among themselves and finally say, "Well, our best answer is we don't know." So Jesus goes, "Well, I'm not going to tell you either." Now I thought that was just really funny because it shows that Jesus has got to have a sense of humour. I was reading that to my wife and we both kind of chuckled for a second, then I said that kind of sounds like meaner, meaner, meaner. It was really funny to imagine the Lord doing that because that must have been so frustrating to the scribes. But recently one of the more impacting verses I read was James 1:22 where it says, "Be ye doers of the word and not hearers only." That should be impacting for everybody you know. We can be Christians, we can go through the motions and handle the Word and not let it do a single thing to us because we can harden our hearts, be stubborn little human beings. But the best thing we can do is be DOERS of the Word.