Landry Cantrell: The Californian singer and songwriter with a breakthrough album

Pastor's son and worship leader Landry Cantrell from Hanford, California, has since age 11 been singing, writing songs and recording them (equipment from Landry's father's recording studio helping him do the latter). But it's now, with the release by Dream Music of his 'Projections' album, that this Californian singer/songwriter has broken through to national Christian music consciousness. Critical accolades have been heaped on Landry's blue-eyed soul voice, the startlingly clever pop production and just about everything else on one of 2017's outstanding albums. Hallels.com have called 'Projections' "fresh sounding, theologically astute and passionately engaging," MauToBeAPerson enthused, "Cantrell's voice is amazing as well as soothing, and combined with his music, it's stunningly electric!" while the hipster-orientated Jesus Freak Hideout, which has seldom praised Christian pop, stated, "'Projections' [is] an album worthy of recommendation - for fans of Christian and secular pop alike."

I spoke to this charming studio-owning singer/songwriter about his life in music ministry.

Tony: Was 'Projections' recorded over a long period of time?

Landry: You know what? It was and that was a little bit different for me. I have my own studio and in the past I'd usually just like to get in there and get things done. But with this album, me and the producer Sean Hill [best known for his work with Jamie Grace] kind of sat on it and took our time. I think that it worked to our benefit because we were able to craft each song together and make sure that each song came out the way we wanted it instead of having to stress about a release date and deadlines and all that kind of thing. So we took quite a bit of time, maybe like nine months to create this album.

Tony: So there were quite a few visits into the studio. Were you around when the producer was tracking up, or did you let him get on with the tracking and then come in and listen to what he'd done?

Landry: The way I operate is, when I'm writing a song I create a demo and so a lot of times that demo encapsulates kind of my vision, what the song needs to sound like. So, I send those demos to the producer and he and I will collaborate on the final sound. He will send me tracks and bring me things and ideas till we come up with a solid track that we really love. Then once we have all the tracks done, that's when I'd fly out to Atlanta to the studio there. I spent about a week with him in the studio there just tracking vocals. Then I ended up flying home and finishing the vocals in my own studio. So I ended up doing a lot of work in both places.

Tony: Tell me a bit about your background.

Landry: I was born in Hanford, California, where I currently live. I'm just a small town guy. I grew up in church singing in the kids choir. I was always interested in singing, music and all of that but it wasn't until my dad gave me some of his old recording equipment, because my dad ran a studio when I was growing up. He did a lot of Southern gospel music back in the day. I'm gonna botch all their names if I try to tell you right now who he recorded there (laughs), it's been such a long time since my childhood. My dad gave me some of his old gear whenever he upgraded his studio and I moved it into my bedroom. I was like 11 I think and I just started recording my voice, recording myself, listening to it back and critiquing it, kind of trying to fine tune the sound that I wanted my voice to sound like. Once that got boring I started trying to incorporate the music and kinda started writing. It was all born from that first little bit of recording gear that my dad gave me when I was 11 years old and that's what hooked me. From then on I kind of set out to make recording music my career path. So what I do for a living outside of the artist thing is run a studio, JNP Studios, and produce for other people.

Tony: Skeletons out of the cupboard time now. I want you to tell me the titles of your albums and the years in which they were released, as much as you can remember.

Landry: Ok, so luckily for me the titles of the albums are not as embarrassing as the albums themselves. When I was 15 I put out an album called 'Back To You' and I think that one came out in 2007 sometime round then. Two years later I put another one out called 'Moving Ahead', then two years after that I put out another one called 'Daybreak'. But between those two me and a buddy of mine, Mark Waddle, got together and decided we wanted to make a worship album so we just locked ourselves in the studio for a couple of weeks and wrote 12 worship songs; got our friends together who were musicians and wrote and recorded this worship album. That album was called 'Surrender' and that one came out between the two solo releases. Mark still does music and he actually runs a worship music clinic which is a huge resource for praise teams and worship leaders and musicians and all that kind of stuff.

Tony: So what happened after those projects? 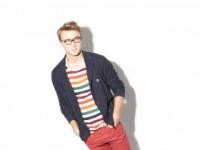 Landry: Well, I was getting a little adventurous. I went to London on a vacation with my family and we went to the West End and saw a musical I absolutely fell in love with it. I thought the music was amazing, I thought the storyline was so clever. So I thought, I want to do that, I want to write a musical. So I went home, got busy on my laptop and I wrote a script for a musical and then I went back and wrote I think 10 songs for this musical that I'd created. Luckily for me the church that I attend here in Hanford were extremely supportive of me and everything that I've done. So we put on a musical, The Rich And The Wretched. We toured with the musical up and down the state in 10 different churches and had a great time. It was just a really cool thing. We recorded that soundtrack, the 10 original songs, and sold it every night at the shows. So I guess that counts as an album 'cause it's all original work that I made.

Landry: After that, I did my first album with Sean Hill independently, a self-titled project. For me that marked the beginning of what I felt like was my, I guess, adult career in music. Up to that point I was in my teenage years, early 20s, kind of trying to figure out my sound. When I did the album with Sean Hill for the first time I kinda felt like this was a clean slate, a brand new start and so I self-titled that album to kind of signify that. And then now we're here with 'Projections'.