Dougie Adams continues his exhaustive trawl through the recorded works of LARRY NORMAN, detailing the Jesus rock pioneer's recordings from 1993 to 2001. Larry makes a comment or two as well. 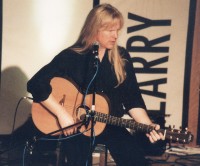 1988-93
Larry Norman, Stranded In Babylon (US Remix), Solid Rock/Sonrise (SRD-016), 1993
The main changes from the European version are that Larry has cut some verses from the bonus track "Under The Eyes" and edited out one verse from "Love Is A Commitment", shortened some of the instrumental and come up with a different running order for the tracks. Still available on CD from Solid Rock.

1991
Larry Norman, Children Of Sorrow, Street Level Records (SLD-023), 1994
A pleasant live album released in aid of the CCPC child foster placement centre Larry has supported for years in Oregon. At the time of its release 'Children Of Sorrow' was the only album where you could find many of these songs on CD, a situation which no longer exists now. Nonetheless if you like hearing Larry live you should like this one as he is in pretty good form whether it be on guitar or piano. Charly and Dan Cutrona drop by for two great songs, a smokin' "My Feet Are On The Rock" and an awesome "A Woman of God". Out of stock.

1992
Larry Norman, Totally Unplugged (Volume 1), Street Level Records (SLD-024), 1994
An edited document of Larry's first gig after his major heart attack earlier that year. Mr Norman is in amazingly good voice even if his health is not the best. A couple of songs from 'Stranded In Babylon' are included amongst the greatest hits and sound amazing. But the highlight of this intimate and personal concert has to be his jaw-droppingly great cover of "Weight Of The World". The cassette version had different songs and a different running order. No longer available.

1974-93
Larry Norman, Footprints In The Sand, Street Level Records (SLD-025) / (Holland) Spark Music (SK 7047), 1994
The first compilation album in quite a while. Comparable in quality with the 'White Blossoms From Black Roots' collection. These 16 songs are among Larry's most personal and are mainly culled from the CD versions of 'Something New Under The Son', 'Home At Last' and 'Stranded In Babylon'. "If You Don't Love The Lord You'll Fall" and "I Hope I'll See You In Heaven" appear on CD for the first time. Deleted in its single CD format.

1993-94
Larry Norman, A Moment In Time, Street Level Records (SLD-026), 1994
10 new songs recorded in the studio, plus the live version of "Right Here In America" from 'Street Level' and a radio spot by Larry in support of the campaign to change the laws in Oregon to outlaw child pornography. These recordings were all demos or rough mixes for the 'Pushing Back The Darkness' album which was never finished. This collection compounds the trend of recent years suggesting that Larry has rediscovered his ability to write and perform again. Worth tracking down second hand copies for the chance to hear songs like "Long Hard Road", "Elvis Has Left The Building", "You Shall Be Saved" and "The Solid Rock". The last time Larry rocked this hard and sounded this bluesy was on 'Something New Under The Son'. The cassette version was different to the CD version. Both are out of stock.

1969-96
Larry Norman, Remixing This Planet, N-Soul Records (NSD 9936), 1996
Eight songs from Larry's seminal 'Upon This Rock', 'Only Visiting This Planet', 'So Long Ago The Garden' and 'In Another Land' get the remix treatment along with two newer classics, "If The Bombs Fall" and "God Part III". Larry is not the only person left wondering just what happened to his classic "UFO" after Virus decide to follow an X-Files sorta vibe and erase the very lyrics which made the song great in the first place! Elsewhere things are a bit hit and miss, but overall not bad. The remixes fall into one of three categories: dance, radio friendly pop, revved up guitar rock. Scott Blackwell almost always hits the right spots on his five remixes. Still available on CD from Solid Rock.

1972-88
Larry Norman, White Blossoms From Black Roots (Book One), Solid Rock (SRD-041), 1997
This time round Larry had more input on song selection and axed a number of slower songs from the first version and chose better mixes of some of the more recent songs. 12 songs in all plus Mark Heard's ghetto dub mix of "Soul On Fire". The new booklet slightly complicates things by giving many of the tracks subtitles like alternate rock remix or acoustic remix or live dance mix when in most cases these are the same mixes as featured on the original CD! Still available.

1976-94
Larry Norman, Gathered Moments: Somewhere In This Lifetime, Howling Dog Records (HDR-701), 1998
Compiled, produced and edited by Normaniacs-in-chief Terry Leskewich and John Wood, this is a collection of bootleg material which spans from the mid-'70s to the mid-'90s. Most of the songs are audience recordings of concerts but there are a few much sought after studio rarities on offer too. The sound quality and performances vary quite a bit, indeed a number of songs were improvised on the spot and hardly rank among Larry's best efforts and don't bear repeated listening. But then again there are a few songs from the unreleased 'Rough Mix' studio compilations and "Rock The Flock" makes its first appearance on disc after regularly wowing concert audiences in the previous couple of years. Perhaps the standout track is the piano vocal studio performance of "Parson Brown" (aka "Oh Death Where Is Thy Sting?"). Still available and mainly of interest to collectors and enthusiasts.

1998
Larry Norman & Beam, Shouting In The Storm - Flevo 2, Solid Rock (SRD-798) / (Holland) Spark Music (SK 7098), 1998
Another visit to the Flevo festival pays dividends. Backed by Beam for the second time that year, Larry shows that he's not living in the past as he delivers a set of tunes from recent albums and previously unheard songs with only a few oldies to supplement them. With Beam in pretty good form the new arrangements of "Six Sixty Six" and "Shot Down" almost transform those numbers into the category of new songs! Elsewhere the crowd gets really into the reggae tinged "Let It Go" while a rewritten "Bombs" is almost as dramatic a finale in this set as "Messiah" was in the 1989 set. The cover of dc Talk's "Jesus Freak" doesn't come off as well as the studio rehearsal on 'Breathe In Breathe Out' or the tribute version. Overall pretty good and nice to have a live album with Larry backed by yet another intuitive and sympathetic backing band. There are two very slightly different American and European versions although both contain the same songs in the same order and have the same booklets. Out of stock in USA but still available in Europe through Spark.

1997-98
Larry Norman, Copper Wires, Solid Rock (SRD-800)/(Holland) Spark Music (SK 7093), 1998
Not exactly a bonafide new studio album but a very nice compilation of songs which were first posted on Larry's official website. Some encouragingly good new songs rub shoulders with a few outstanding cover versions on a set that was recorded quickly in a couple of weeks. One of Larry's most accessible pop albums with an interesting use of cover versions: Curtis Mayfield's "People Get Ready", Pete Seeger's "Turn, Turn, Turn" and Dylan's "When He Returns" are all utilised to reiterate Larry's core message of previous decades; namely, that we need to be prepared for Christ's return.

Larry's Comments: 'Copper Wires' refers to the physical conduits of communication in computers and telephones. A Christian magazine had said I once was a bright light but had become a dark cloud, that I had turned away from the Church, my friends and my family and they speculated that I had lost my musical ability and possibly my mind. They didn't call up my parents or my church or my friends to see if any of it was remotely factual. I had just financed a 50th wedding anniversary surprise party for my folks, bought my church a brand new sound system and curtains and given money to several friends who were having trouble. But maybe I have lost my ability and my mind. Only time will tell, right? So 'Copper Wires' is just my own communique to people, saying nothing at all about the gossip but going right back to the Garden of Eden and working my way up to modern times using my own new songs and other songs I really love. I end with "When He Returns" because that's where it really all ends, or rather begins anew, isn't it? And I put on some bonus tracks from our first internet gig years before, which was one of the very first Christian internet concerts, or maybe even the very first. And I'm kind of saying, "You can use the copper wires to gossip about others, or you can use the copper wires to glorify God."

Still available from Solid Rock and in Europe from Spark. There is no noticeable difference between the American and European versions except that they have different picture discs and booklets.

1998
Larry Norman & Beam, Breathe In, Breathe Out (Double CD), Solid Rock (SRD-799), 1998
One of my favourite recent CDs from Larry. He cut this double album live in the studio in 10 hours as he rehearsed for his 1998 European tour with Beam. You get the feeling that Larry has been waiting to team up with a band who are as able as Beam to follow his intuitive instructions like "do something psychedelic!" and they happily oblige. Beam seem as comfortable rocking out at full volume on epic versions of "Jesus Freak", "That's When Jesus Knew", "Friendship's End" and "I Wish We'd All Been Ready" as they are providing subtle acoustic backing on "Goodbye Farewell", a jammed version of "Like A Rolling Stone" or a little rock opera number "Is God Dead?" from the '60s. Some fans didn't like the couple of false starts, studio chat and second takes which were left in, but for me this is perhaps Larry's most enjoyable rock album ever. It might have been a genuine classic if he had put in a few fades, edits and added one or two overdubs. No longer available.

1979
Larry Norman, Live At The Mac, Solid Rock Illegal Noise Series (SRD-863), 1998
Without doubt this has to be by far the worst album Larry has put out. Randy Leyton, the original distributor of this bootleg, claims that the tape release attained legendary status. The Solid Rock newsletter is more dismissive, "It sucks", they warn. Basically this is a very poor quality audience recording of a show from Larry's 1979 tour backed by a band comprising of several of the leading lights from the Solid Rock label. It's hard to comment on the quality of the performance as the most striking thing about this CD is the amount of times the cheapo tape recorder's microphone gets bumped or the tape gets chewed up! That said, the bonus track, "Lonely By Myself recorded at another show and on a different tape recorder is stunning. Solid Rock's artwork also improves things and the front cover has Larry sitting just behind Jimmy Carter... yes, then President of the United States of America! Part of the thinking behind releasing this one seems to have been to make it available at a less ridicul ous price for the collectors who were trying to track down the original bootleg copies and paying inflated prices. Only 200 copies were pressed and Solid Rock are currently giving this away free to anyone also buying 'We Wish You A Larry Christmas'.