One of the most unexpected releases for many a year was N-Soul's recent remix album of Jesus Music legend LARRY NORMAN. Mike Rimmer spoke at length to the man who almost single handedly invented Christian rock music. 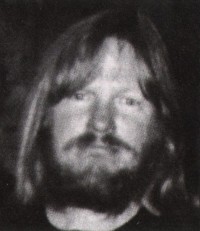 To see and hear today's sanctified dance buffs grooving to the surreal techno of Larry Norman's "UFO" on the 'Remixing This Planet' album or modern rock lovers enthusiastically discovering the same album's remixed classics like "Why Should The Devil Have All The Good Music" and "Why Don't You Look Into Jesus", shows that true talent will outlast transitory fads. N-Soul's 'Remixing This Planet' has brought Larry to a whole new audience.

Larry Norman is on the telephone. It's early afternoon in Oregon and late night in Birmingham. He sounds sleepy and at first our conversation is punctuated by yawns because he's just woken up. Like many creative people, Larry prefers to live at nighttime. So what does he do? "I've been a night time person for 25 years so sometimes I spend time on the Internet. I jam with people on the net. There are a group of people in different countries who perform together. There's a certain technology they've developed that nobody else has. My brother and I write songs for people in other countries and start jamming with them. You tell them what frequency you're on, what instrument you're playing so they can voice it on their computer. They then choose an instrument and you choose it on your computer. That way everybody can hear what all the others are playing. It's all done with midi keyboards."

April 6th, 1997 sees Larry Norman celebrate his 50th birthday. A landmark for anyone, so how will he be celebrating? "I'll probably throw another party on the net," he responds. "I don't feel 50 - I feel the same as I always feel. Some people grow older in their minds but it hasn't happened to me yet!"

Larry's passion to communicate his faith has found a fresh expression on the Internet and I wondered how he used the new technology. "There are different ways to use the Internet," he explains. "One way is the immediate way - if I'm talking to somebody on the Internet about God I can answer their questions at that specific moment; the other way is to write essays and post them."

Larry has established his own site and that will be the venue for his 50th birthday party. "When you get to the site there's a cafe called the Street Level Cafe," Larry elaborates. "It's a virtual reality cafe. There's a menu and you access different things and they take you to different places. There's even stuff to do if you're waiting during the party. Last time some people couldn't get into the room because there were so many people already inside, so they could do an anagram game to pass the time. There was a riddle contest and we were even giving away prizes. A lot of people come back to our site so we try to change things often; if people come back things aren't always the same. We like to be interactive as well. The Internet can be used for information and there may come a time when there are things that are important to report about happening in the Church. There are laws being passed in America that restrain the Church so the net is a good place to discuss things and to notify people."

So does Larry find the 'net more interesting than the music? He responds, "The Internet is just a new way to communicate; it's not really a replacement for public communication. I don't think the Internet is ever going to eliminate the value of public meeting."

The last time Larry spoke to Cross Rhythms magazine, he was in a hospital bed in Holland where he had collapsed with heart problems after a gig. The problem started with a blood clot, which was misdiagnosed as indigestion which caused part of his heart to stop functioning, resulting in a heart attack. He was given only a few days to live. Yet Larry lives to testify to God's loving care over his life. He's been in hospital quite a few times since then but God's been taking care of him in such a way that he's able to come home from hospital each time. Despite all his heart problems, Larry remains in good cheer. He's now waiting for better health in order to fit a device to his heart which will kick-start it into action if it stops. As we chat about his health, it is clear that he worries that it's all a bit of a bore to keep talking about it. He is clearly keeping things in perspective when he says, "Sometimes I just think maybe this is just a small part of what Paul experienced. He went through a very active sequence of violations to his body, like shipwrecks and imprisonments. But when he wasn't in prison or stranded on an island he was walking down the road towards the next church city to preach. That's the way I feel -I can either be well or just be patient when I'm sick."

One consequence of his recent ill health has been the change in the amount of work that he does. I wondered whether the financial implications of working less troubled him. How does he manage? "God takes care of me," Larry says, in a straightforward way. "I have friends to help me. If I'm hungry I won't starve, I've got a mother! Actually, I've never had the attitude of 'I must do music to make money.' I've had the elitist attitude that I work for God so he supplies my needs. I rely on him to take care of me. With other people there's a direct correlation between their work and their income, but for me it hasn't seemed that way. There have been times where I haven't toured but I've always been able to pay the rent.

"When I was in the hospital I lost my car because I was unable to make payments on it. I didn't know if I was even going to get out of hospital. They kept telling my parents I was going to die, which I didn't! So I got out of hospital but didn't have a car. A family that I had only met the year before and barely knew suddenly called up and asked if I had need of a car because they had an extra car so they loaned me their car for a year and a half. They paid for the insurance so all I had to pay for was the petrol. The way I look at my life, it falls under the providence of God's care."

Larry is very close to his family. He used to live in Los Angeles with his brother Charlie; however the air quality is so poor that Larry would sometimes have problems breathing due to the smog. Moving to Oregon has improved the situation. He shares a house with his brother and his parents and sister live nearby. It is obvious that he has a great deal of affection for his parents and in the course of our chat he tells me more about his mother.

"My mother is very cool. She's a lot more musical than most moms. She's been a real encouragement too. This will give you an idea of what she's like. When my brother was 14, he was in a popular punk band and they threw a party. But they did it in a house and instead of inviting the public, they invited friends. There they were, tearing up the atmosphere with sound and the police arrive. My mom's there, sitting on the couch. The police tell my mother to stay there while they send all the kids home. Then they were going to book her for disturbing the peace and for using her house for a wild party. So she said, 'Oh, I don't live here.' They were totally shocked because they thought she was the mother.

So they asked her what she's doing there and she said, 'I was invited to this party, so I came.' So there was my mom, sitting there for a couple of hours listening to punk music played as loud as the band could play it. My mom is very hip."

In 1993, Larry released the live album 'Omega Europe' to commemorate what at the time was reckoned to be Larry's last live performance with a band. The concert featured his son Michael helping his dad with vocals here and there and showing a precocious stage presence. These days Larry shares parenting duties with Michael's mother, Sarah, who lives nearby. So how is his son shaping up? "He loves information and knowledge - he reads a lot," Larry says. "We have a lot of deep conversations. He's very intelligent. He's very inquisitive, which I think is more important than natural intelligence. We talk about everything for hours and I let him talk a lot. A lot of parents think they need to tell their kids all they know. I like to find out what he knows and thinks about and we discuss his opinions. If he's got something a bit backwards I ask him if he thinks it's possible to do this or that the other way on.