Leigh Nash: The Sixpence None The Richer singer now "happy in her own skin" 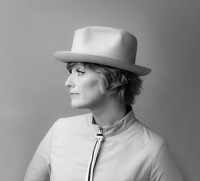 If you were privileged to attend the Love Love Rock Festival in Taipei, Taiwan on 12th November 2016, you'd have witnessed a rare appearance of Sixpence None The Richer. They were reported to have blown away the massed Taiwanese throng, thrilled to hear the alternative rock band run through their big hits "Don't Dream It's Over", "There She Goes" and of course, their multi-million seller, "Kiss Me".

A huge amount has happened, both good and bad, since Sixpence None The Richer were originally formed in New Braunfels, Texas in 1992. When the group announced they were folding in 2004, and founder Matt Slocum went off to start a new band, the Astronaut Pushers, and singer Leigh Nash began working on her solo album 'Blue On Blue', fans understandably thought SNTR had become pop music history. But then, in November 2007, Sixpence reunited and released an EP, 'My Dear Machine', and the following year issued the Christmas album 'The Dawn Of Grace'. After that, recordings and live appearances occurred less and less.

By 2011, Leigh Nash was recording a solo worship album, 'Hymns And Sacred Songs', through Kingsway Music. As it turned out, the album failed to set the CCM/modern worship scene alight and, in view of these country-sounding vocal tones, it wasn't altogether surprising when, in 2015, she made an out-and-out country album, 'The State I'm In'. The album didn't elevate Leigh to the country big-hitters, but it did give her a musical template for the years ahead.

So far this year Leigh has released four singles. Her first, issued in April, marked the 20th anniversary of Sixpence None The Richer's megahit "Kiss Me" with a re-recording of the song. Leigh spoke to the femalenetwork.com website about the new version. She said, "It was really fun. . . My voice-and I don't mean to brag-but a woman's voice hits her peak in her 30s and 40s. And I feel like I'm a stronger, better singer than I've ever been, so I think it came out really beautifully. I didn't want it to sound exactly the same [so] we added a little bit to it."

In July, Leigh issued "Dime AdiÃ³s (Say Goodbye To Me)" and, two months later, her composition "My Love My Drug" came out. She spoke about that song. "The benefit of getting older. . . I've had struggles in my life like we all do, and 'My Love My Drug' centres around a really serious struggle that I had for a few years. Maybe a year. And that resulted in a song that means a lot. . . In the United States we have a huge epidemic of people taking opioids, and they're dying. I did not have a problem with opioids, it was sleeping pills. I was just looking forward a little bit too much to sleeping at night, versus being awake during the day. It made me very sad. So I wrote a song, almost like a love song to a drug. That's what this song is about. And I know it's meant a lot to the people when I performed it. . . Because it's either they had trouble with or know someone who has, so as a grown-up woman now and not a child, it's nice to be able to sing about things and themes that I've actually gone through."

The same kind of raw honesty that sourced "My Love My Drug" is now shown in her latest single, "Don't Let Me Die In Dallas". She explained, "'Don't Let Me Die In Dallas' is about my father passing away." Leigh's interview with the Female Network contains some advice to her younger self, the singer who once sang with naÃ¯ve innocence about kissing "beneath the milky twilight". She said, "I remember people told me that all along, and it's hard to hear when you're young - 'It's going to be okay' - when you're full of anxiety and stress. 'What's tomorrow gonna be like?' But now I'm in my early 40s. . . I'm more comfortable in my own skin. I love myself and my family and friends more with a greater capacity than I've been able to before, and that's hard to tell a young person. Sometimes you have to walk it out and figure it out yourself."