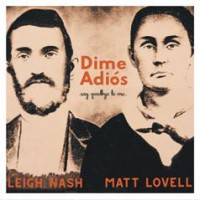 ONE-TIME Sixpence None The Richer singer Leigh Nash, who in April released a two-song single "God Gave Me Horses" and an updated anniversary edition of Sixpence's "Kiss Me", has released a new single. "Dime Adios" features Leigh and Matt Lovell. Said Nash, "'Dime Adios' came from me wondering how to say goodbye to someone in Spanish. A little google, a little conversation with friends and the next thing you know, my friend Matt Lovell and I were carving a song out of it. If you know me, you know I love Mexico; the people, colours, culture. That includes the language! And though we didn't get it perfect (I'm sure), we did our best! I hope you love it! This is one of my favourite ballads to date, and I do love a ballad."