Lindy & The Circuit Riders: Taking the message for the world to hear

Lindy Conant-Cofer is a long, long way from your average pop singer or even your average worship leader. California-based Lindy is a full-on evangelist, revivalist and missionary and despite the fact that she's already enjoyed releasing a chart-topping album and who's new release, credited Lindy & The Circuit Riders, is getting national distribution through Bethel Music, Lindy clearly wants to talk not about how many millions of streams she's had but rather about the green shoots of revival which she and other members of the Circuit Riders are beginning to see whenever they play a concert.

Lindy told Cross Rhythms, "I was just telling someone yesterday what we and the Circuit Riders are all about is worshipping God and giving him room to do what he wants to do. We've asked the Lord to empower us to take the message for the rest of the world to hear. I really do believe that all throughout Scripture we see God using people; it's the people God uses. Worldwide, there are unreached people groups, we know that and it's important that the Church continues to work to reach them. But we also know there are people in the churches in the USA and Europe who need to connect with the Lord and allow the Gospel to change their lives, to find new resources of joy, to get the opportunity to share the Gospel. We're going to pray for you for that to happen. We can all pray and be a part of the Great Commission. I really do believe we are living in the days when we can see the Great Commission fulfilled."

Lindy was born in Edmond, Oklahoma but moved to Kona, Hawaii. In 2007 she joined Youth With A Mission (YWAM) and a year later at age 19 she was asked to lead worship for a large YWAM gathering. Her "yes" turned into far more than a oneÂ¬ time opportunity. These worship times would spark spontaneous songs bearing the message of what has become the passion of Lindy's life - mission. It was the beginning of a new chapter of her life's calling. As a missionary she would lead people to encounter God, only now, she would do so through music.

From YWAM Kona Lindy was launched to be a missionary to the United States. She, along with YWAM missionaries Andy Byrd and Brian Brennt, formed the Circuit Riders, a missions ministry focused on leading a generation to Christ. Their pioneering years began on the college campuses of America. Hundreds of campuses are now being reached each year through various aggregations of the Circuit Riders with more than 60 musicians touring the United States each year playing songs, many written by Lindy and other members of the Circuit Riders. This powerful ministry has resulted in hundreds of Christian conversions and countless lives being impacted by the Gospel. Said Lindy, "We love music and we love what we get to do, but we're most excited about people finding God for the first time. That's our sweet spot!"

In 2016 an album, 'Every Nation' by Lindy Conant & The Circuit Riders, was recorded with a live audience at Ambassador Auditorium in Pasadena, California. The Nashville-based Christian music industry was staggered by the album's instant success, debuting at number one on Billboard's Top Christian Albums chart following its release on 4th June. The album also debuted at 97 on Billboard's Top 200. 'Every Nation' was produced by Gabriel Wilson (Bethel Music, John Mark McMillan). Getting such a renowned producer involved came as a big surprise, as Lindy told Cross Rhythms. "No one planned for that. We literally called up Gabriel who is an amazing producer and we said, 'Hey, do you want to do an album? You don't know us.' He said, 'Are you guys broke missionaries?' And we said, 'Yeh, basically.' And he said, 'You guys are so crazy, I'll work with you.' So when it came out, we got our campus contacts to share it and we thought it will reach our circle. When we saw it was number one we thought, ok, it'll be number one for a week, but then it was two weeks and it was number one on Billboard and we were like, what is going on? It was a huge surprise to all of us." 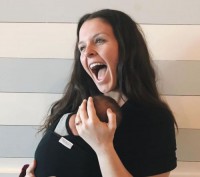 Lindy told TheChristianBeat website, "This album is about eight years in the making. These songs have formed through significant moments as a community. Anthems were created as we continually were learning from God about the great harvest that is among us! To have this album for download STILL doesn't feel real to me. Every testimony I hear or read makes it more and more real to me every time!"

After the astonishing success of 'Every Nation', Lindy fell in love with fellow Circuit Riders missionary, Chase Cofer, and soon after that they married. But Lindy still found time to perform and record. In 2018 a mini-album was released credited Circuit Rider Music. Alongside other Circuit vocalists like Chloe Mack, Lucas McCloud, Taylor Ezzell and Mattie Anderson, Lindy sang a powerful song, "Mark My Hands".

Now 'Driven By Love' released through Heritage Music Group, an imprint of Bethel Music, is receiving accolades. The influential Hallels website wrote, "The album's title cut is not only the backbone of this record, it is also a career defining song. Titanic in the song's execution enhanced by Conant's larger-than-life powerhouse vocals, 'Driven By Love' is a 100,000 volt turbo-charged push for us to get out of our seats and carry out the Lord's Great Commission. 'Obedience', the song's sophomore single, is a brilliant follow-up as Conant sings about her response to Matthew 16:18-20: 'I will obey you with my yes.' 'Mercy', on the other hand, teaches us how we are to be Christ's evangelist: 'Mercy changes the heart, words only go so far.' Thus, this album isn't just a worship record. Rather, it's a viscerally potent manual to evangelism."

Lindy told JesusFreakHideout website, ""My prayer is that people who listen to these songs meet Jesus, find his heart and fall more in love with him. That's what happened to me while watching ['Driven By Love'] form over the last two years."

The album's title track was birthed out of a response of worship after Conant-Cofer listened to author and speaker Andy Byrd preach about a generation who is driven by love to a room full of young people at YWAM in Kansas city. She said, "That was the first time this chorus was sung. That night, [my husband] and I separately heard from the Lord about taking in children and also the nation of India. This song feels more personal than ever because of the little one that sits in our home now. We have heard it a thousand times, but let's keep letting it sink in: 'Without love, we are clanging cymbals. Without love, we just add to the noise.' This isn't a love that my own strength can conjure up. It's a love that comes from surrender and being poor in spirit so LOVE himself can love THROUGH his people."