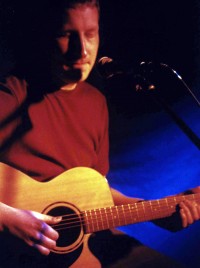 A smaller-than-hoped-for crowd enjoyed a good night of blues inspired music from Lins Honeyman and friends in Perth on Saturday 28th August. Although a veteran of countless pub gigs around Perth over the last 10 years, Honeyman's performances have significantly matured and developed over the last year. While his guitar playing remains solid, his vocal delivery has gained a new harsher edge suggesting that either he has taken up smoking 20 cigars a day or that Ray Charles left him a fully functioning set of vocal chords in his will. Either way, his songs gained a new dimension from the enhanced vocals, helped by good sound production. Following a solo acoustic set, which featured a good mix of his older and newer songs, Honeyman was reunited on stage with his old comrades from the Still Waters Blues Band; Bruce Cameron (slide guitar), Chuck Reid (blues harp), alongside a new rhythm section, Paul Hardingham (drums) and Derek Alder (bass). The new band had a great rapport, were tight and sounded good together and were obviously enjoying themselves as they stormed through a set of Honeyman and Cameron penned numbers such as "Goodbye Mr Blue Sky" and "Ask In My Name". A surprising cover version of Stevie Wonder's "Higher Ground" was thrown in for good measure too. Although not a ministry event per se, it was great to spend an evening in the company of talented musicians whose faith in Christ came through as a very natural element of their songwriting and banter between numbers. From songs about "my first car" to "One Way Street" (a warning about running from God) there was a happy harnessing together of real faith and everyday life - and the crowd loved it.

Paul, hi there, its a privilege to write these few words about you, you sound like my type of man, and your should be commented on all your doing to help people built a business. I am a member of Agloco, and i hoping we all can make some good money soon with the company. I really am kind of broke at this time living day to day tryed everything on the net to make some cash and they all fail for some reason, so i hope this Company can help me. i appreciate all your help you can give me to get out of my debt this year or the coming year. i a 72 yr man and need to get out of debt and try living a different life with my wife and my family, i have 2 boys grown up, one marred has one grandson for my wife and i, another boy he is still living with me, now with his fiance and 12 yo boy, hoping to getting married soon. as for income i live on my s/s and little pension with my wifes combined, and a p/t time cleaning job 3 hrs a night, keep me well busy. anyway this about all my history, just to let you know. anyway you can help me, i would appreciate it, thanks and keep in touch as we go in to April tomorrow. God bless. a freind in hope! Derl & Peg