Lisa Jayne: A Yorkshire-based artist who's battled against ME 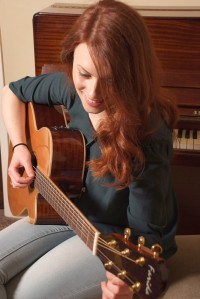 Most singer/songwriters who've risen to the formidable challenge of recording a quality album have a story to tell about overcoming innumerable difficulties. But few can match the story of 21 year old Lisa Jayne Hoyle, whose 'Lost Or Found' album (under the name Lisa Jayne) was released last year. For many years of her life Lisa has battled against ME. It was while at school that she contracted viral meningitis which then developed into ME.

On a visit to Cross Rhythms she told me, "I probably missed six months of school solid and then gradually got back into it. It certainly got rid of all my plans for life - and the plans have turned out much better. They have been very different to what I anticipated life would be like. It's a really difficult experience finding that your life has been on pause for six months and everyone has learned to get along just fine. I remember I went back too soon to school and it did not go well. I remember going back and discovering that I didn't have a seat in history anymore. And it's things like that you didn't think were issues, but you don't have a place anymore. I did seven weeks of college and then was far too ill after that - it was quite a long period of being either housebound or wheelchair bound. Somehow, though, bizarrely I'm rather pleased that I've gone through it."

It was during this period that Lisa Jayne's Christian faith really kicked in. "That was the time that faith became a living thing - something that you lived out rather than something that you knew. Up to that point I'd grown up in a Christian family, I knew all the stuff and I probably made my first real commitment that I remember when I was eight at Spring Harvest. But later I got with some not very nice girls at high school. I probably wasn't a very nice girl myself. I had one friend who got put next to me in German - which was probably my least favourite class, and probably hers too - and our parents knew each other. They'd done some work in the Gideons. I'd barely known her when I got ill. I had two 'best friends'. When I got ill I was basically asleep for six months but these two friends didn't come to visit me once. But this girl, who was a Christian, came every week without fail and just sat there with me, even though I couldn't talk. I remember thinking this is what faith should look like. And obviously you don't have a lot else to do when you're stuck in bed for that amount of time so that was when I chose to evaluate what faith should look like and how do I become the kind of person that I think God wants me to be. For me it was never really about why has God done this to me. It was about how do I make this a gift that God's given me?"

There were periods when Lisa Jayne's illness seemed to be receding. She explained, "The thing with ME is the condition fluctuates. So when I first got it I was at quite a low point and couldn't do anything. Then I gradually got a bit better for about a year and a half. And at that point it was kind of you're either totally fine or you're totally not fine. There was no middle ground at all. I pushed myself really hard to do college and the backlash of that was a major relapse. It took about two years just to recover from those several weeks at college. The bizarre thing is when your body's pushing itself and running on adrenaline, when you take your foot off the pedal everything just stops. That was it for me and I just crashed. That was the worst and longest period of ill health I'd had; it was so intense and so sustained. When you're 17 you can receive treatment from specialist centres so that was when I managed to go. That was probably the beginning of my serious recovery, which is still ongoing."

During Lisa Jayne's lengthy battle with illness music was a constant source of consolation to her. She explained, "We have a piano in our house 'cos my Mum plays. When I was first off school after a few months I could start coming down stairs again, that was something I could do. That's when I started to really love the piano and had my eyes opened to what it could do. And the songs just kind of came from there really. They were never songs about health particularly, they were about how God can be seen in everyday situations and in everyday people."

Lisa's album was produced, recorded and mixed by James Grover at Peak Studios in Bradford. Speaking about the project the singer/songwriter said, "I had a couple of songs and bits that I kind of liked playing and liked writing but most of the songs came through that difficult period of life and I sat on those for about a year. Then I was at a Christian conference and I just felt God saying you've been given this gift and you've sat on it but now you need to go and use it. I definitely didn't do performing at this point at all. So it was like I really needed to go and record. I remember looking round some studios and I saw some terrible ones. I went to one that was in a guy's shed and I wouldn't have even fit in my keyboard, it was dreadful. Then I went to another one in Bradford, which is not too far from me, and as I was looking around I heard a Christian song playing in the background. I had no idea this place was a Christian recording studio or had any Christians in it so this was the affirmation that this was the right place and this was the right thing to be doing. I started recording there and began that journey."

One of the most powerful songs on 'Lost Or Found' is "Promises". She said, "It's like that first hit of pain, it sounds really 'Heartbreak Hotel'-y but that's how it felt at the time. Obviously at this point I had no idea that it would ever be recorded. It was literally a case of I'm really upset and I'm really mad right now and the best way I can communicate this is to write a song about it. So 'Promises' was that first experience and I've since thought about and had discussions about whether that should remain in the album. In the end I came to the conclusion that actually it's really important that Christians are allowed to feel the same things as other people. We're not allowed to stay in that place of unforgiveness and not be practising that grace but we're still going to feel that initial feeling the same way that everyone else would. Sometimes I think we skip over that and to take it out would have been skipping over it and pretending it didn't happen and that didn't seem fair. So the song is about when you've built your world on someone and when you look back on it how foolish to do that with anyone because you're placing something that should be placed on God onto a human being."

Through her illness Lisa has learnt a lot about the way God works. "I definitely learnt about the wisdom and authority of God more than anything. It's easy to think in a situation like the one I found myself in, that there's been some sort of mistake or there needs to be some sort of blame placed. It's been interesting seeing God's will come out in those little ways and in some of the big ways throughout my time coming through ME and seeing that God is massively active even when he appears to be being passive."