A dramatic conversion and a miraculous healing are just parts of the story of world record winning hip-hop evangelist MC TEMPO. He spoke to Mike Rimmer. 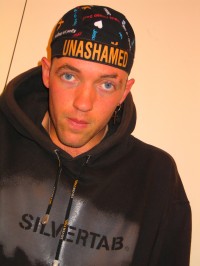 Brighton-based rapper MC Tempo has clocked up all kinds of experience in the hip-hop world. He's worked with everyone from Killer Kella to Tim Westwood, he's noted for his world record 24 hour free-style rap (with Buzz) and this most talented of "Scripture-spitting rappers" (to quote his publicity sheet) has been timed at a mind-boggling 180 words a minute. His album 'The Last Days' on his own Blazin' Beatz label features guests like Zulu (thebandwithnoname) and Doodie Do plus one or two musicians you wouldn't expect to turn up on a hip-hop album, like Nathan Fellingham (Phatfish). MC Tempo was born in Hammersmith, London but has long been established at the famed New Frontiers International's Church Of Christ The King (CCK) in Brighton. Recently the rapper told Mike Rimmer on the Cross Rhythms Rimmerama programme about his ministry there. "I'm a full time evangelist really. Evangelism comes pretty much before anything and my music is a form of evangelism. I felt God put it up on my heart to do so I have got to go with that. I lead a table on the Alpha Course down in Brighton. I help out with the supported housing unit, helping homeless people. I just finished a four year stint as a youth leader with our church. I'm interested in working with anyone. Jesus never said, 'No, you're too old, I can't talk to you!' Jesus was the same with everyone, prostitutes, tax collectors, whoever. It's no-holds-barred. I don't think it would be too wise to limit yourself in that way, especially if you feel God is directing someone to you."

The rapper had a very troubled upbringing. Despite failing at school he developed a passionate interest in words. "I always had a fascination with words and stuff; like when you speak to people and they use like a five syllable word and you don't know what it means and you sort of feel that they've got the better of you. It gave me a hunger to learn a bit more and extend my vocabulary. Then I found words that rhymed with them and then I started putting it into practice a bit more."

It was a rapper friend, JT, who showed MC Tempo the rudiments of rapping. But away from clubland things were far from easy. It was in 2002 that the troubled teenager became a Christian. He recounted, "I got thrown out of three schools, my parents split up, my younger sister died. As a result I turned to drugs as a form of escapism. I ended up mixing with the wrong sort of crowd and stuff. It wasn't too cool but at the time I really didn't know what was going on. I reached the point of suicide. I just couldn't handle it. The out of the blue I started thinking about religion. I wondered what the point of RE and RS lessons really was. I wondered if there was a God. Then, one time in my room I said, 'Lord, if you are there give me a sign. Something that I can't class as an illusion. Something I can't class as a coincidence. Amen.' That's all I said. Thought nothing more of it and got back on the bed." 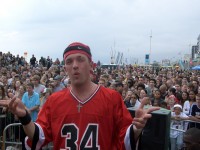 What happened next stunned the young man to the core of his being. "I switched on the TV and saw the valley of Gallilee in the background and these credits were running up the screen. I heard the voice of God speaking to me over the back of that. I wasn't high and I wasn't drunk and if I was, I could have put it down to something I had taken, you know. God obviously knew that. I heard this audible voice saying that he loved me and that he had a plan for me and all this stuff. I was totally spun out! I ran down the road to my mate's, banged on the door shouting 'God's real, God's real! God's really, really real!'"

Trying to pull himself together he went back to his room to hear some more of God's voice. "I said a prayer and switched on the telly again and there was nothing! I said another prayer, switched on the telly again, still nothing. A bit confused I sat there and then I thought 'He did that book didn't he, that Bible thing?' So I got hold of one of them. I made a covenant with God in my heart. I said, 'Look God, you know I can hardly read, you know I'm dyslexic but I want to do you a deal. I want to finish reading your book by the turn of the year.' And I did. I finished it cover-to-cover. I couldn't understand half of it, couldn't remember half of it. One line which always stuck out to me through it though was, 'If you seek me with all your heart surely you will find me.' At the end of the year I went out on New Year's Eve and got a bit wrecked. Whatever I did, I don't know. But the year after that all these things started happening. My dad became a Christian. And my dad was a bit of a shady character! My sister and my two brothers from completely different points came to Christ independently as well. It was absolutely amazing!"

Living in Brighton, the rapper decided to investigate local church. He explained, "I was just like, 'Ok what's it mean God about seeking first your Kingdom?' Where do you seek God? In his house, maybe in church. So I went down to church and some of the people there had their hands in the air screaming 'Jesus'. I thought they were all a bunch of crackheads! This guy got slayed in the Spirit next to me. It was a bit much really. I was grabbing this guy thinking he was having a heart attack! I ended up doing an Alpha course, which was quite cool, in fact I ended up doing two Alpha courses. I had Wendy Virgo, the legendary Terry Virgo's wife, on my table, which was brilliant. She answered loads of questions that I had. From there I got invited back to church to hear a guy called Ram Baboo."

MC Tempo continued his extraordinary testimony, "I used to be deaf in my left ear. I was up on the balcony in the minority crowd at CCK. There was like 1100 or so people in the auditorium or whatever. Ram came on the stage and just started praying, 'Help me, help me heal people in the name of Jesus.' He pointed straight up at me and said, 'You are deaf in your left ear. Stand up, God wants to heal you.' I thought how does he know that?! I didn't have the bottle to stand up straight away. I figured I would call his bluff and wait for him to pick on someone else. But he didn't back down, he said, 'Look, God's told me and God doesn't lie. I know it's you, stand up, God wants to heal you.' I stood up, went to the front, got prayed for and I could hear again!"

Having had such life-impacting encounters with God, MC Tempo is now zealous in his pursuit of non-Christian listeners. "My raps are based on things that God has put on my heart. Things that I might see in society that I'm not happy with, not at peace with. I get inspiration off other artists as well sometimes. Like a lot of my ministry includes rapping at night clubs on the same lineup as a lot of secular artists, at raves and places. We are called to be salt of the earth, sort of thing, to just get right in there, in the thick of it. You look at the urbanised generation listening to Eminem. If you can offer someone an alternative to that with a positive message then you've got to be on the right path." Few believers would doubt that this rapid-tongued, Scripture-spitting MC is on that path.

My daughter brought home one of your albums when you visited her school, cardinal Newman. I have listened to it so many times and it is incredible. I am always so inspired by your positivity and wholehearted ness. Your music is so alive. Thank you for being bold enough to cry out about the joy Jesus has given you.

You came to my school today, and you inspired not only me, but a lot of my friends, so thankyou. Your story is amazing, and one I know for sure i'll never forget!

Great story but - 180 words a minute? Doesn't sound right, not very mind boggling at all

Hiyaa Mc Tempo Keep All The Good Work Up Mate

Just wanted to say i was so encouraged to hear you in Leicester Square over Pentecost Festival. I work in that area as an evangelist;- it was great to hear un-compromising truth and a positive message in what is often such a den of iniquity! I was able to chat to someone about Jesus yesterday who had seen the witness in the square.

heya. just wanted to say that i love to hear your story over an over again. n i loved yo music at newday this year 2007. its was class. me n my mate lisened every day while we webnt for a sneaky ciggarret lol. keep up the awsome tunez :) shonna x

wow mate... keep testifying. what do you mean by "the rudiment of rap music" please tell me more.
Proverbs 21 vs 21

Props to you MC Tempo. Keep it coming for God. Urban headz represent!!

Clive, 'rudiments of rap' means the basics of how to rap - lyrics, rhyme schemes, delivery / your flow, rhythms, etc.

I thank the LORD for your life in Him. Keep on keeping on until the Day!

14But thanks be to God, who always leads us in triumphal procession in Christ and through us spreads everywhere the fragrance of the knowledge of him. 15For we are to God the aroma of Christ among those who are being saved and those who are perishing. 16To the one we are the smell of death; to the other, the fragrance of life. And who is equal to such a task? 17Unlike so many, we do not peddle the word of God for profit. On the contrary, in Christ we speak before God with sincerity, like men sent from God.