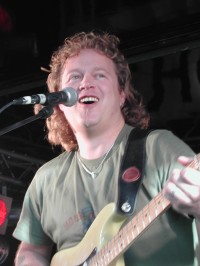 At the tail end of 2004 a vibrant slice of muscular rock gospel called 'Closer' by a Croydon-based musician called Marc B Chapman arrived at Cross Rhythms villas. A track was subsequently featured on a CR Experience sampler. We tracked Marc down to get some facts about this talented rocker.

Tony: Give us a Marc B Chapman biography.

Marc: As a youngster, an older friend lent me his Deep Purple, Wishbone Ash, Larry Norman and Randy Stonehill records along with other '70s rock bands and guitar and blues heroes. I was young and this was my first real introduction to music of any kind. Gradually I began playing along on an old guitar, picking out tunes on one string at a time. Slowly I learnt a few chords and began the journey of learning and making music.

Although I grew up in a Christian home, the likes of Larry and Randy made the faith thing seem real and relevant, as much of the other music I listened to was frowned on by the older Christian folks or considered "of the Devil." Larry's famous song just made so much sense... "Why Should The Devil Have All The Good Music?" Why indeed? Wasn't God the creator of all? The solace I found in music and the reality with which the words of Larry and Randy hit me led to my making a real decision to follow Christ. It was literally a faith thing at first which over the years has become a real relationship with a real person. It amazes me that God is never satisfied and is always hungry for more of us and a greater intimacy and closeness with him. The only limit on it is us! As I grow, he constantly leads and teaches me to grow ever nearer and closer to him - there's always more and I can always get closer, I can never empty him of what he wants to give me; I can never get too close; there's always more love, more wonder, more amazement, more understanding, more grace, as to the insight of who and what he really is.

Tony: Tell me the circumstances leading up to you recording an album.

Marc: As I grew up, I began playing in bands and as I grew in my craft, so the opportunities grew with me. I have been so blessed to have been able to play with all manner of high class musicians and artists over the years in so many varied bands and groups. However, I am never more satisfied or fulfilled than when I am worshiping the Creator. He seems to have given me keys through music with which I can enter his presence and lead people there also. As I go on musical journeys of love, passion and worship to the Lord, his presence becomes so tangible, so immense, so amazing - it seems every time is a step further on. I wanted to make an album that brought God's presence into people's lives when they played it. I wanted to make an album that brought the Holy Spirit into situations and ministered to people's every needs, bringing peace and healing. 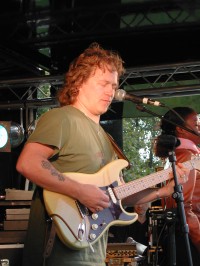 I set about recording some of my songs one day with a bunch of friends. It was a simple live, one take recording, just so's I had a version of the songs for copyright purposes. Then I began listening to a rough mix of the session in the car. It began ministering to ME! I knew the mistakes and less than perfect notes and sounds that a "one take" might entail more than anyone, but despite that, it brought the Holy Spirit and a sense of God's presence right there into my car. I couldn't believe it... there by accident, I'd recorded an album that fulfilled the exact desire and aim I'd have had if given the opportunity to make a record. If it could minister to me in this way, what might it do for others? After careful consideration, I cleaned up the tracks, remixed it and released it as an album exactly as it was recorded - live, acoustic and in one take with no overdubs. It has blessed and touched so many people, I am staggered at the effect God has chosen to release through it.

Marc: I began listening mostly to '70s rock and blues type music, but my influences and appreciation covers so many fields and genres. Larry Norman and Randy Stonehill still remain heroes of mine, but so too do Ozzy Osbourne, the Eagles, Wishbone Ash, Kelly Joe Phelps. I listen to jazz, classical, blues - the whole deal. God has gifted ALL men and non-Christian writers and players affect me as much, if not more than a lot of Christian artists! If I can sense a real talent, a real gift and a real quality, I can appreciate most forms and styles of music. In recent years I have been honoured to gain experience and learn from guys like Dave Markee, Bryn Haworth, Don Potter and Leonard Jones of Morning Star. These guys carry such musical excellence and skill, alongside an appreciation and outworking of the anointing and gifting of a godly musician. Even one of my best friends, pro guitarist John Wallace is an example and inspiration of high class, godly, anointed musicianship and skill.

Tony: What kind of gigs have you done so far?

Marc: I have been so blessed over the years to have played lots of major venues and events with all manner of pro and named secular and Christian acts. These include Wembley Arena, The Royal Albert Hall, Notting Hill Carnival, Kensington Temple, Queen Elizabeth Hall, Cross Rhythmns Festival. Even as the Marc B Chapman Band, venues like Trafalgar Square, Greenbelt Festival, God Digital TV, the Imperial War Museum, Battersea Arts Centre, etc, have played host to our music and performances. I mix my own original music and worship leading with playing lead guitar in a busy working rock band and am thus able to perform and provide bands and music for conferences, private functions, pubs and clubs, be it Christian or secular, and I love being able to do this in both fields - God is there whether it's a pub, club or church!

Marc: At the moment I am producing a recording project for an artist called Jesse Lebby - an amazing talent whose songwriting and voice are incredible. However, even more exciting for me, studios and band members have been booked to begin recording my own follow up album to 'Closer'. This album promises top musicians, great new songs and some slick studio production. It is very exciting to see a second album under way and I look forward to its release. As ever there are ongoing gigs - usually four to six a month, conferences and events to continue touching people with God's heart through exciting and dynamic music. The website, wwwmarcbchapman.com is being constantly updated and gives more insight as to what Marc B Chapman is all about!