Margaret Becker: US singer to make an appearance at Cross Rhythms '95

One of America's best selling CCM artists, MARGARET BECKER, will be playing in Cross Rhythms SW as one stop in a three month European sojourn. She spoke at length to Jan Willem Vink. 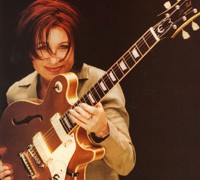 Her string of hugely successful albums including 'Immigrant's Daughter' (1989), 'Simple House' (1991) and 'Soul' (1993) have made her a "star" on America's CCM circuit. Yet Margaret Becker is coming to live in Europe for three months this summer and she's looking forward to it. For the so-gifted CCM singer is tired of the American mentality and the mainstream Christianity that's presented in the US.

When I ask her if she's escaping the United States she agrees. "I think that's a good word. I have no regrets with the US, but there is a different mentality in Europe towards faith, it is more of a holistic mentality. People over there tend to approach Christ in more of a cultural way, where they incorporate Christ in every area of their life, without leaving behind their culture. There is a move here in the US for the past 40 years to destroy *N culture and I replace it with only mainstream Christianity and I don't believe that is what Christ had in mind. I think the Europeans have a better hold on it.

"I like to live my life that way and it's what attracts me to Europe and I believe that especially in the western European nations they have a good hold on that.

Since these are very general remarks, especially in the ears of a European, I ask Margaret if she can give some specific examples of things that she has seen in Europe that she appreciated. Answers Margaret, "I remember I performed in Norway a few years ago and it was at an event that was a sports event and also a CCM festival. I was very taken aback that in the early morning, before the sun moved up, I could see people cross country skiing on those roller cross country skis. All throughout the area that I was staying in, these are Christians who are also athletic people, cross country skiing before the sun comes up and then at the same time they go to concerts and appreciate Christian music, while excelling in their athleticism. It really hit me because it was such a beautiful integration of their culture. These people were athletes, but they were also Christians. And one did not destroy the other, they completely incorporated that.

Margaret's views seem to be a strange mix between herself distancing from her upbringing and on the other hand embracing it. She definitely seems to step away from the somewhat legalistic mindset, which was prevalent on her first album.

Agrees Margaret: "Earlier on in my career, if I was not black and white, then people would not accept me. My walk with Christ has always been more grey, for the lack of a better word, because my grandparents are European, I come from a background that was very cultured. For me when I got to record I thought I had to really make this black and white, because otherwise these people wouldn't accept me.

"I realised after the first album that black and white is really the letter of the law. That's Old Testament, either you pass the test or you don't pass the test. My experience in life has been completely opposite of that. It was actually my second album where I said, 'I must speak I about the grey areas, because I think that God works very heavily in the grey areas, because I think most people live in the grey.' Most of us live in a place where it's not always completely neat and complete, but we live in an area where there is a lot of undone ends, a lot of knots, a lot of inconsistencies and that is what it is to be human and God can meet us at that place and that's when I began more writing of what my personal experience was."

Part of Margaret Becker's upbringing is the urge to achieve and the fear of failure because of her perfectionism. On new year's eve, when Margaret and some close friends raised their glasses and said their new year's resolutions, Margaret said she wanted to live life more passionately. "I feel definitely like I'm succeeding," says Margaret, after four months have passed. "I think so often the main goal is to succeed and to put away money for your retirement and to obtain things that will give you a profit. I think for so long a time my focus was on those things that, one day I woke up and looked in the mirror and said, 'Wow, I have not even enjoyed this journey, I have been so focussed on the end, what will happen in 25 years, but I haven't enjoyed each day.' It was at that time that I said, 'I have to make more of a point of enjoying every breath that I take in and enjoying the laughter and even the tears and all the emotions in between because these are gifts, granted one at a time from God. Not something we should enjoy only in looking back or looking forward, but something we should enjoy as they occur.' I am very thankful that since I made that discovery that I have been faithful to it and my life has taken a much more relaxed and wonderful pace."

Margaret is learning what grace is. Unmerited favour, which is not coming because we do certain things for God, but because of what he is doing for us. In the process, Margaret is leaving things behind and gaining new things. As she said in Release Magazine, "I'm leaving behind the whole dogmatic approach to God. It was like 80 per cent of my approach to him, which will probably be about 20 per cent now. I'm leaving behind that pressure of being heavy handed with the gospel and I'm embracing the message that God has given me at this moment, to be a lot more inviting with it, provoking people to jealousy so they'll draw closer, not beating them over the head with it.

"I'm leaving behind the whole separatist denominationalism that's driven home so hard within the churches. I refuse to participate in it. I'm leaving behind the heavy-handed picture of God right now. I would be misrepresenting his work in my life if that is the picture I paint for people. He has been that to me and he certainly will be again, no doubt, but right now I'm enjoying the qualities that are very, very detailed and bigger than life enough in my particular experience - the merciful qualities, the kind qualities, the endearing, drawing qualities."

On the other hand, Margaret Becker is embracing her upbringing, since she has found her way back to the Catholic church. But when I carefully ask her, she almost seems agitated. "Yes, that has caused some good and some bad," answers Margaret. "You must understand that my mission here in the US has been to do away with labels. In our culture, if you say 'I am Baptist', 'I am non-denominational', 'I'm Pentecostal', 'I am charismatic, Catholic, Presbyterian' you have immediately set yourself apart from other believers.

"There is an organisation here that tallies public opinion. They tallied all people who claim to be Christians from all different denominations. When they came back with the report it said this: 'If people continue to draw lines underneath the concept that Jesus is Lord and continue to say," Well, Jesus Christ is Lord but I'm only a Baptist, Presbyterian or Pentecostal" then faith as we know it in the US will be destroyed in the next two decades because there will be too many differences.' We can't agree on anything.

"One of my missions has been to say, let's not label ourselves, let's not put up walls between each other. I may go to a Catholic church, that does not mean I'm Catholic, in that I cannot (disagree with) any Catholic rhetoric or Catholic belief. That just means that I believe that Jesus Christ is Lord, I believe that he died on the cross for me and I believe he lives and interacts with me on a daily basis. Personally, I am also receiving a lot of growth from this particular aspect of faith, more of the Catholic view of faith, but that does not mean that you should call me a Catholic, or non-denominational Christian, because once you've given me that label, you have done what they did in the New Testament where some of the people were saying, 'Well, I'm of John and I'm of that apostle', and all of a sudden in this particular instance there was a demon in the Bible that said, 'Well, I don't really know these people, Jesus I know, but the rest of these people I don't even know what you're talking about.' That's a prime example of what's happening in the US. I think the biggest distraction, or the biggest destroyer of our faith, is the fact that we want to call ourselves by a label. Personally I think the only label that we should call ourselves by is the label of Christian. We should be able to say, without fear, 'I'm a Christian, but right now I attend a church that has this label, but that doesn't mean that I believe that you aren't also a Christian.'"