Martyn Joseph: From Dolphins to Prostitutes, the Welsh songsmith looks for inspiration

"Dolphins Make Me Cry" was called lachrymose (given to weeping) by an unimpressed Q magazine but at least now they're noticing MARTYN JOSEPH. Gavin Drake reports. 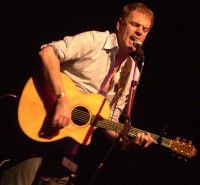 It's been a momentous year for Martyn Joseph. For close on 10 years the embodiment of the subculturat 'big fish in a small pond', the Welsh singer/songwriter has finally tasted the heady brew of the Big Time. His recording contract with Sony Entertainment Corporation (still known as CBS by us punters) has bought him one mini-hit, "Dolphins Make Me Cry," (number 34 in the pop charts) and one flop, "Working Mother", both from an album 'Being There' that is still accruing mixed reviews. It's been Martyn's high profile tours - with Beverly Craven, Joan Armatrading, and most recently Chris De Burgh coupled with an advertising budget that only corporate buck can buy, which are most obviously light years from the youth club gigs and church photo-copiers which were once the backdrop to Martyn Joseph's musical life.

The sixty four thousand dollar question (though, probably, Sony are paying a lot more than that) is will Martyn Joseph become the big name recording artist his record company are pitching for? This only God knows. Three weeks before his rapturously reviewed set at Greenbelt, Martyn Joseph took time out to speak to me.

What have you been up to lately?

"I can't remember what I did two days ago y'know. I'm pretty busy but everything is going well and we've just been given the Chris de Burgh tour, that's about September time. I shall be the support or 'special guest' that type of thing. It'll be about a month long in this country, then there's a possibility of me going into Europe."

You have achieved what a lot of CCM artists can only dream of doing. How did your mainstream deal come about?

"Basically a lot of hard work and a lot of pushing! When t recorded 'An Aching And A Longing' I played Greenbelt that year and a guy called Gordon Charlton, who at that time was head of A&R for what was then CBS Records picked up a copy of the album. I got introduced to him at that weekend. It was two years before he signed me so there was a lot of hard work still to go but he began to come to concerts. During this time there were some changes, CBS become Sony and Gordon went to work for the Epic label. His boss liked me and they signed me last August. It was basically a lot of hard work, a lot of disappointments along the way. Sony weren't the only company I was trying to get a deal with. There was definitely a conviction within me that this was what I was supposed to do and fortunately we got there."

Were you disappointed that "Dolphins Make Me Cry" didn't go higher than 34 in the charts?

"If somebody had offered us 34 before we started the campaign we'd have grabbed it. Nothing's certain and the Top 40 is an incredibly difficult thing to penetrate these days, much harder than it was say five or six years ago, because of the dance thing. I guess when you get to 34, and we also had midweek at 28 that week, you kinda get a little bit greedy. So yes, I was obviously a little disappointed it didn't go higher. But having said that, we were just delighted in the sense of me being a new artist to Joe Public and it got to number 34. Singles are primarily adverts for albums, the sort of folk who like my music aren't all going to rush out and buy a single. They'll probably hear it on the radio or whatever and go and buy the album. So in that sense it did a very good job. We'll be re-releasing "Dolphin's Make Me Cry" around Christmas 'cause we believe it can go higher given the right chance."

You seem to have impressed the right people, "Dolphins" was Simon Mayo's Record Of The Week twice and Our Price made 'Being There' a Recommended Release.

"I don't know whether that's because they're impressed with me or the size of the record company! We didn't impress everyone. There were certain people who slated 'Dolphins', but some people loved it. A lot of that is down to marketing strategy, a company the size of Sony have a lot of contacts and are able to that sometimes. Having said that, I don't think Our Price would give space to anything they thought was detestable but I don't think they're solely impressed with the record. When I'm writing a song, I don't really know what people are going to think about it. If you worry about that you make the song for the wrong reason. You'll say 'I won't put that in because so-and-so in that magazine won't like it.' or 'I'll take the sting out so it's suitable for Radio 2' etc. I believe you have to be true to what you believe in and what you do and hope people like it, and it would seem that the people like the 'Being There'."

The album's title track seems to be very political. Does it represent your own political standpoint?

"That lyric was written by Stuart Henderson - he sent it to me as a poem. I started to work with it, put music around it and I came up with this song. Anything I sing I have to endorse of course, I'm not using Stuart as a scapegoat. But I'm not aligned to any political party. I don't sit on the right, or in the middle ... I don't know where I sit! The Poll Tax seemed to be a pretty unfair thing, but there are continually things about both Left and Right I would want to embrace. I'm not political. I'd rather see myself as some sort of commentator."

A lot of people have commented that you have sold out. After the Amy Grant crossover controversy, that was probably to be expected. But some people have said that it was a compromise by removing the 'Golgotha' lyric from Dolphins.

"In fairness, I've had one letter about that to which I've replied. I've tried to reply personally to most letters I get. Some of the letters I get are quite nasty sometimes; they feel I'm not sticking true to my beliefs. The thing is, if people actually listen to the original recording of that song which is on an album Treasure The Question', the 'Golgotha' lyrics aren't on it. They're not part of the original song. It was an ad-lib that I did live and which ended up on the 'An Aching And A Longing' album. Occasionally I use the 'Golgotha' ad lib live and sometimes I don't. It depends on what the circumstances are I'm in. But I think to look at that line and say I'm not honouring God if I don't use it is to pour scorn on the whole song. Because the whole song is about eternal things. It's about Heaven; it's about things on earth. It's about things God created and realising that we are supposed to be looking after these things. To worry about two lines seems rather strange. All I can say is the original song didn't have those lines in. I don't think it makes the song any more or less powerful. I didn't mean to upset people by leaving those lines out. I don't think God would worry about the omission."