One of the stars at the Alliance Festival is singer/songwriter MARTYN JOSEPH. It's not been an easy time for Martyn, having recently parted from record giant Sony. Gavin Drake spoke to the Welsh crafter of songs. 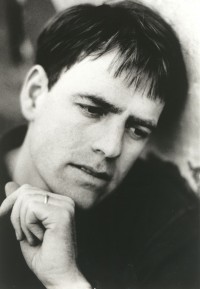 The prophets of doom and gloom who said that Martyn Joseph, the big fish in Britain's Christian music's small pond, would not survive as a small fish in the mainstream music industry's big pond are right. Martyn Joseph and Sony have | recently parted" company and his new, decidedly low budget album is in the Christian bookshops through Alliance Music.

But Martyn Joseph does not come across as a bitter man, resentful that Sony didn't finance the recording of his latest album, 'Full Colour Black And White'. Rather, he appears as a man disenfranchised with the entire mainstream music industry - an industry he sees as a farce. He is only too keen to point out the extremely fickle nature of the industry, as clearly demonstrated by the way in which he obtained the Sony contract in the first place.

"I had made the decision that I would not record again until I could get on a straight forward label," Martyn said. "For years and years and years I had sent demos off. I had people biting a little bit. I had CBS, which was Sony, for two years coming to gigs. They ummed and ahhed. Finally, we had the big one set up. Simon Mayo came to the gig. I said, 'Come down, it might look impressive,' and he came down. The big rep from Sony didn't turn up.

"A guy called Oliver Smallman, who manages Louise and Eternal, had come down and for a while he managed me. He saw Simon and he had a word in his ear. The very next morning at 10 to nine Simon Mayo made an announcement on the airwaves. He said, 'A message for Andy Stevens. I don't know where you were last night but there was a gig you were supposed to get to - Martyn Joseph at the Mean Fiddler. There were a lot of people there with a lot of chequebooks. I think you might have missed the boat this time... Anyway, here is the weather.'

"This guy is driving into London, he stops his car and his mobile phone rings. It is Paul Russell, head of Sony International. 'What's this, who are you missing, what is going on?' Four days later I was offered my recording deal. That is how stupid, fickle and ridiculous the music industry is. I like to think I did some other things as well to get me nearly there. But it is a nonsense," said Martyn.

His departure from Sony came about because of the music industry's dependence on single sales as a mark of a successful musician. Despite respectable album sales and a positive response to his support tours, Martyn's singles managed only to penetrate the Top 30 once.

"Sony were faffing about. I was on tour with Art Garfunkel last year and they had released one single off the album which had got to number 43. They had put all their eggs in one basket. Their hopes were on 'Talk About It In The Morning' as a single and when it got to 43 and not the top 40 they were, 'Oh my goodness' and they immediately said they were not going to put any more singles out, they wanted to work the album.

"So I did (support for) Mike And The Mechanics, Celine Dionne and Art Garfunkel and I was out there working the album. But it became apparent that it is all very well to do that but you need exposure that a single gives you. So we were putting a certain amount of pressure on them to release another single off the album that we felt had at least five tracks they could go to radio with.

"So they said, 'Well okay. We will press up "Between The Raindrops" and see what happens.' They sent 'Between The Raindrops' to radio stations and it was getting more airplay than Talk About It In The Morning' was. But they decided not to put 'Raindrops' in the shops. After that there was really no way forward. The last single by Tasmin Archer, who my manager also manages, was play-listed at Radio 1 and at Capital in London, which are the big, big ones to get, and she only got to 53. Talk About It' had none of that and it still got to 43, but Sony still didn't want to push it.

"I guess it had come to the point where they had spent a certain amount of money over a four year period. I had a lot of friends there and they felt, 'We don't really feel in the current climate of Brit pop and everything else there is anywhere further we can go with this.' I virtually made the decision for them because I tend to form quite close links with people and then it gets kind of personal. And they were all, 'We don't want to let you go.' I was saying I am in the real world and all that and I said, 'Guys, it is okay. I understand you have a job to do. No problem.'"

Martyn was once more a free agent. He had been working on possible songs for his next album and he had a choice. He could try and get another mainstream record company to pump thousands of pounds hiring expensive studio time or he could go with what he had. "I have a little Studio in my house and I was making good quality demos of new songs, because I didn't want to wait another two years to make an album. I had been with Sony for four years and only had two studio albums which for me is not particularly prolific. I like at least one a year.

"I put a few overdubs on it and thought, 'Gosh, this sounds quite representative, quite good.' And so I had an album 'Full Colour Black & White' ready to go as soon as Sony said it was okay. As soon as they said that, I mixed it, went out and toured a bit and took the album to Ian (Hamilton of Alliance Music) and they said they would market it. This album is a lot more stripped down than the others. It didn't have the big budgets that the last two had but that can be an advantage. It was recorded mainly in my own house, so you are not in a recording studio where you are paying 800 pounds a day to the producers and all that pressure.

"And if it was one o'clock in the morning and everyone was asleep but I didn't feel sleepy but I felt inspired, I could go up stairs and mess about a bit. And therefore there is a very relaxed and intimate feel to the album. There is a bit of story telling there, sort of representative to some extent of the live concerts more than the produced studio album. A little bit rough round the edges and I am looking forward to people's reactions. So far it has been very positive."

One of the most striking songs on the album is called "He Never Said" which people have been begging Martyn to record since he first wrote it with Tom Robinson two years ago. Another standout is "Heaven Angel Walk With Her". "That has a personal meaning for me," said Martyn. "It is a very sad song. It isn't evangelical talk in a sense, because it says, 'Some who walk this earth are not meant to be free.' That is not exactly servant stuff really, is it? It is the opposite. It comes from a feeling that you meet certain people in life who have to carry certain crosses - as Paul said. It is a very, very sad and despairing song. I kind of specialise in those, but it means a lot to me.