Martyn Joseph: Welsh singer/songwriter who's not just a pretty face

MARTYN JOSEPH bares his soul in conversation with Tony Cummings. 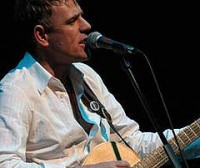 When I worked at Buzz I never much liked Martyn Joseph, It all seemed too easy for him. Sure he 'paid his dues', tens of thousands of motorway miles burnt up playing every church hall and youth club gig he could get to. But there were his albums 'I'm Only Beginning', 'Nobody's Fool', full of stereotyped imagery and hackneyed rock-by-numbers accompaniments but selling thousands in the Christian Bookshops.

There were those girls would envelop him at every Spring Harvest seeking autographs or a snapshot-with-a-star.

Surely, I thought, it was Mr Joseph's good looks and Ears & Eyes crafty opportunism as much as talent which made Martyn Joseph big fish in the tiny subcultural pond. Then it all began to change. Suddenly there was Martyn embraced by the radical Greenbelters who'd once sneered at him. There was Martyn quoting John Smith and a hundred militant causes from stage and magazine interview. And there at last were good albums, a US recorded "Treasure The Question" and a low key yet strangely satisfying acoustic "An Aching And A Longing" to show there was an agile mind and musical muscle behind the subcultural trivialities. When I caught a school hall concert a month prior to his Electric Tour the Welsh singer/songwriter looked and talked like a man at the crossroads. New doubts and contradictions permeated his songs and his persona both on an off stage.

He still flashes his famed smile when nice Christian girls ask for autographs. But his heart seems no longer in the school hall world of small time entertainment or one-to-one ministry. CBS are beckoning. Our interview, in his hometown of Cardiff, where he lives with his wife Sue and baby Daniel began with a plea to go beyond the banal repetitions of subculture interviewers. Yet when pressed hard, as he asked to be in our interview the raw nerve of the Ears And Eyes debacle was clearly exposed and he momentarily floundered.

Yet Martyn Joseph is a transparently honest man. Alienated by the banal jargon and stilted pretence of much contemporary evangelicalism, he's determined to speak his mind, even when he comes over as a trendy iconoclast as much as a prophetic radical.

But at best, when haranguing the smug middle class-ness of evangelical religiosity or the vile genocide of the Khymer Rhouge, Martyn Joseph is a man bristling with newly found passion. And though, five albums on, Martyn has still to find a style which truly pulls together the disparate parts of his influences, his acoustic live set 'An Aching And A Longing' is still at times a moving and memorable album.

Tony: How come you ended up as a professional gospel singer? Did you have a blinding revelation or something?

Martyn: No, certainly not, never have been - I honestly can't say that I've ever heard God telling me what to do with my life. For some people that's a bit of a shock, but I believe that we're given a life and we're responsible for it. From a young age I wanted to be a professional sportsman in the golf world. I could slowly see that wasn't happening and although music was probably my second biggest 'hobby' it wasn't really something I really contemplated being able to do for the rest of my life.

I came to the age of 19 or 20 as a committed Christian and the only circle outside of my golfing world was the church, and the young people of course. I was sort of snapped up by well meaning people that see someone who's a Christian can sing and say 'Right, let's put him into coffee bars and things'. Which is great but it can stop that person from going out into the world a little bit and playing in the odd bar where he can communicate with non-Christians.

Tony: But you were happy to go along with it. Let's face it the Christian subculture made you a living. And your first two albums were lousy.

Martyn: I totally agree with you - and I have no defence, other than to say that I feel that I was somewhat entrenched within a Christian subculture. I was applauded for mediocre art by people who were quite happy with that because it spoke about Jesus and therefore it didn't really matter what sort of quality it was. It rubbed off on me because I wasn't intelligent enough and wasn't really listening enough to other music, to know the difference.

Tony: Weren't there people getting alongside you and encouraging what was good about your music and criticising what was bad?

Martyn: That never happened, it was never really pointed out, it was always great, fantastic - 'isn't God blessing your ministry' Blah...blah...blah. That's fine if its just art for the Christians I suppose. For the wider world it was nonsense. But then there aren't that many people who know the difference between good and bad. We know when Jesus criticised it wasn't popular. He pointed out shortcomings and it wasn't popular. If I go up to a young artist and say 'actually man, I think it's absolute rubbish - I don't care how many thousands you've sold. If you do it this way, you might have a chance of doing something worthwhile', it isn't going to be too popular...but it will be honest. That never happened to me.

Tony: During those early years in your career you were managed and recorded by Ears And Eyes which it now appears was a right old can of worms...thousands of pounds of unpaid bills et cetera et cetera. How come you were so slow to wake up to what Kevin Hoy was doing?

This seems an unnecessarily rude and personal interview, with an unnecessary focus on Greenbelt festival. Granted, the festival has been a big part of Martyn Joseph's career, but he can hardly be expected to answer criticisms of it - why not more about the journey of faith that led him there? Martyn's responses are as gracious as ever despite the intro suggesting otherwise!

I was an artiste signed by Ears & Eyes, my name is Kevin Walker and I played with John Pantry and Martyn Jospeh in years past. My Album was called In the Dusk which was years before it's time . I was sad to hear about Kevin Hoy. Anyway I am still out there and just about to release another album if anyone is interested? Kev Walker