Marvin Sapp: After losing his wife the singing pastor still declares 'I Win' 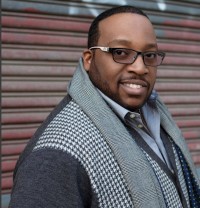 When Cross Rhythms last reported on Michigan-born gospel star Marvin Sapp in 2007 he was in the process of breaking through to the upper echelons of gospel stardom. After years of serving with the R&B gospel pioneers Commissioned and enjoying moderate success with a series of solo albums the singing pastor - Sapp heads up the Lighthouse Full Life Center Church in Michigan he formed in October 2003 - his 2007 album 'Thirsty' featuring the biggest gospel song of the year "Never Would Have Made It" not only reached number one in the US gospel charts and 28 in the mainstream album charts, it has continued to sell ever since. 'Thirsty' has today sold a staggering 712,000 copies and in 2009 Sapp won all seven Stellar Awards for which he was nominated.

'Thirsty''s followup, another emotion-drenched live project 'Here I Am', issued in March 2010, made music chart history. With its release, Sapp became the all-time highest charting gospel artist in Billboard's 54-year history of tracking album sales. By selling approximately 76,000 copies of 'Here I Am' its first week out, the album debuted at number two on the Billboard 200 chart, making 'Here I Am' the highest charting album ever by a gospel artist. 'Here I Am''s lead single, "The Best In Me", which was co-written by the album's producer Aaron Lindsey (Israel Houghton), peaked at number 14 on the Billboard Hot R&B/Hip-Hop Songs chart and was number one on Billboard's Gospel Songs chart.

Talking about his unexpected rise to gospel superstardom Sapp told Gospelflava.com, "The 'Thirsty' release was just overwhelmingly unbelievable. . . 'Never Would Have Made It' is a phenomenon in gospel music history. What has happened with that record may never happen again. [For my next album] I wasn't really trying to follow that as much as I was trying to make sure that with my next project, I didn't alienate my base. I've built up a wonderful following and I know what they like to hear me sing. I wanted to give more of that but I also wanted to stretch them and stretch myself by adding different nuances to what we do and making the sound bigger. So Aaron (Lindsey) and I didn't leave our formula. I recorded in the same venue as 'Thirsty' (Resurrection Life Church in Wyoming, Michigan). We used the same producer, the same background singers, the same musicians, and the same people in the city that I live in, because I wanted to produce the same anointing. I really think that we accomplished that goal with the 'Here I Am' CD."

In the midst of Sapp's unprecedented success the singer/pastor experienced a huge personal loss. His wife MaLinda, who was a professor and psychologist and who served as administrative pastor at Lighthouse Full Life Center, contracted colon cancer. Marvin told GospelFlava in March 2010, "Whenever you are experiencing something supernatural, I just always look for the enemy. The best way he can hit me is through my family."

In the same interview Marvin stated his belief that his wife had been healed. But on 9th September MaLinda died. Recovering from the devastating loss Dr Marvin Sapp (the singer has been awarded doctorate degrees from two institutions) will be releasing in April a new CD and DVD. The project 'I Win' was recorded and filmed at Evangel Cathedral in Upper Marlboro, Maryland and Aaron Lindsey once again produced it with Myron Butler serving as the music director. On the powerful DVD Sapp talked about the song "I Win" and said, "We are more than conquerors. . . I win! I win! I declare it! I shall win!" The anointing fell in the place throughout the performance. Next, Dr Sapp sang the worship song "Glory" and transitioned into a hymn medley of songs such as "I Need Thee", "Bless The Lord O My Soul" and "Can't Nobody Do Me Like Jesus" followed by worship songs "More Than Ever", "Deeper" and "Leaning". He took time to share his testimony about what he has been going through since his wife passed and how things seemed at times like he was out of control but he knew God was still in control. Sapp exclaimed, "I still survived!" he began to sing the song "My Testimony" and the audience broke forth in high praise. Sapp ended the song by having an altar call. Clearly, the veteran singing pastor still has many lives to touch in the coming years.

I love DR, PST Marvin sapp he's a blessing to me ever since the first time I listened to his song I was filled with joy .....I really love it when I watch him sing most especially I love hearing him sing praise him in advance that song touches my soul alongside never would have made ..though many other are gracious too

I was sooo blessed & in tears when I first listend to your song "Here I Am" I'm going to have them play it at my sons wedding on 10 Dec 2016; after my speech, believing it's going to touch many ppls lives Amen; just like it touch mine & my children...after all we've been through as a single mum...IM STILL STANDING STANDING by GOD'S GRACE & MERCY!!!