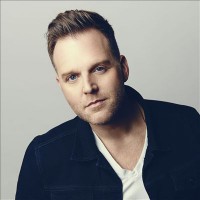 In late September a press release went out to Christian media. It began "award-winning artist and songwriter Matthew West will debut his second full-length studio holiday album, 'Unto Us: A Christmas Collection' on October 21." As most followers of Nashville's CCM will know, Matthew West is a skilled crafter of songs, an affecting singer and a man whose uplifting music has brought him a host of Gospel Music Association Dove Award nominations. I say nominations because in years past Matthew was nominated for such things as New Artist Of The Year (2005), Pop/Contemporary Album Of The Year ('Happy', 2005), Song Of The Year ("Only Grace", 2006), Short Form Video Of The Year ("My Own Little World", 2011), Song Of The Year ("Forgiveness", 2013) and Songwriter Of The Year (2016) and it's particularly ironic that the only Dove Matthew has actually WON is Recorded Music Packaging Of The Year for the 'Happy' album (and surely that should have gone to 'Happy''s Art Direction team!).

Be that as it may, news that Matthew was releasing his second Christmas album will have delighted his legion of fans. Of all the hundreds of artists for who, each year, decide to release Christmas projects, only Amy Grant has a larger Christmas music following. The Illinois-born, 39-year-old singer/songwriter is by his own admission something of a Yuletide addict. He said, "Christmas is my favourite time of year, hands down! I've been known to break out a Christmas record in July, so no one has to twist my arm to make another Christmas project. I love the classics and wanted to include some of them on 'Unto Us'. 'Silent Night' and 'The First Noel' on this record are two I am especially excited about."

He continued, "As a songwriter, I tend to write a few new Christmas songs every year. It's always a way for me to reconnect with the greatest story ever told - the birth of our Saviour. The song 'Unto Us' is really for the Church. I've led worship ever since I was growing up in my dad's church and even though I don't always write worship songs I had a musical idea that seemed to send this particular song in that direction. 'Join The Angels' is a fun song celebrating the birth of Jesus and I wanted it to have that classic feel. I actually wrote that song at the beach. Like I said, Christmas in July!"

Matthew's first Christmas album 'The Heart Of Christmas' was released by Sparrow in September, 2011. It received highly enthusiastic reviews and the title track, a duet with gospel's Mandisa - "Christmas Makes Me Cry" - and another with Amy Grant -"Give This Christmas Away", all West originals, received praise and airplay while Cross Rhythms Radio plumped for his stirring rendition of "O Come All Ye Faithful". Also in 2011 Matthew made his film acting debut appearing in the Gary Wheeler-directed film The Heart Of Christmas co-starring with Candace Cameron Bure. 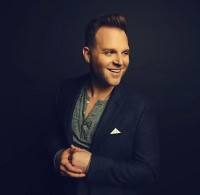 In 2014 Matthew released the album 'Believe' and the first single from the project was "A Christmas To Believe In". The track is now included on 'Unto Us'. At the time of the song's single release Matthew said, "When I was asked to write a song based on the broader theme of 'believe', the first title idea that popped into my head for some reason was 'A Christmas To Believe In'. Something just felt classic and special about that. Then, I began to unpack all the things that title could mean. One of the things I wrote down on my lyric sheet one day was a list of titles that substituted other words for the word 'believe'. I began to think of what, sadly, Christmas might actually feel like for so many hurting people. For the person battling depression around the holidays, they might say it's 'A Christmas To SURVIVE'. For the unemployed father who is worried about providing for his family, he might be feeling like it's 'A Christmas To AFFORD'. For the family that's been torn apart and is dreading the one time of year when they all have to be under one roof it could be looked at as 'A Christmas To ENDURE'. And the list went on and on. I guess this song is my wish for people, that they will be reminded this December how the word 'believe' is powerful enough to erase all those other words that we might be using to describe this Christmas; that the one we believe in is strong enough to flood our hearts with hope this year and show us what a Christmas to believe in is really like."

Matthew added "My favourite Christmas memory is actually in the final lyrics of the song. "It's grandpa's Bible opened up, to Luke chapter two. . . Every Christmas morning my dad would stop us before opening all the presents and we would read the story of the birth of Christ. There was something very centering about that moment before the chaos ensued; our hearts were brought back to the reason why each Christmas really is a Christmas to believe in."