Michael Anderson: The US singer/songwriter fusing acoustic and electronic sounds

Don't let a classic album slip by you. That's the advice of Tony Cummings who's been investigating the thrilling acoustic/electronic fusion of singer/songwriter MICHAEL ANDERSON. 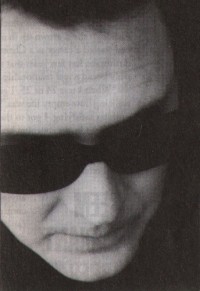 One of the finest albums released this year is 'Love Is The Hard Part' by Michael Anderson. In the States, Michael is best known as a songwriter for mainstream country stars. His "Maybe It Was Memphis" for Pam Tillis was nominated for a Grammy Award. But those who assume Michael is a good ol' boy sticking solely to country - and such an assumption might seem justified considering the distinct country feel of Michael's previous FrontLine release 'Saints And Sinners' - will be surprised to learn that consummate songsmith Anderson has also written for techno pop team Code Of Ethics and heavy rockers Holy Soldier. And they will be staggered by the thrilling eclecticism that has gone into 'Love Is The Hard Part', Michael's brilliant new album.

Acoustic rhythms, funky programming, blues influences and production dexterity have all fused in a set of songs which bite deep, deep into their spiritual subject. Explains Michael, "For quite some time now I've been doing electronic music, using a lot of samples and getting more and more into my personal studio, which I use probably in the same way painters use different colours and techniques."

The stunning result was recently called 'Peter Gabriel-esque' by one amazed US reviewer but really Michael's unique musical synthesis closely resembles no one. Was Anderson's record company ready for the quantum leap from the country-tinged sounds of 'Saints And Sinners'? "Eddie (DeGarmo, co-owner of ForeFront) had a lot of faith in me," answers Michael. "Eddie said, 'Why don't you make the record you want to make - what you hear and what influences you.'"

Like a dusty, well worn road, these musical influences wind their way throughout Anderson's life - twisting and turning with the changes. Born and raised in Grand Rapids, Michigan, Michael was the eldest of seven children. Although his mother was Catholic, his parents' divorce when he was 14 left Michael questioning religion and faith.

A self taught musician - he plays bass, guitar, keyboards and piano - Anderson dabbled in song writing in Michigan, but except for the local radio station, he lacked an outlet for his efforts. After stints at Ferris State University and Thomas Jefferson University, he moved to Los Angeles to pursue music full time. And in tandem, he also pursued fame and fortune. "I wanted to be rich, I wanted to be famous, I wanted to be a star. I enjoyed adulation." And to that end, Michael embraced the Hollywood party scene - the glitzy lifestyle, drugs and alcohol - but it left him "pretty wrecked and shattered."

At this time, Anderson was spiritually searching - via Zen, New Age material and macrobiotics (a belief system which indicates that the path to human happiness must include a fundamental understanding of sound health principles). The macrobiotics cleansed Michael of his drug problems, but larger questions about God and Michael's place in the world still haunted him.

A friend who was witnessing to Michael invited him to church after a discussion they had about Jesus and Christianity. The following week, while she was out of town, Michael decided to go to church by himself. It was there that his spiritual searching led to real answers and he embraced Jesus as his Saviour. But Michael didn't expect Christianity to instantly colour his world a merry shade of sunshine yellow.

"To me, Christianity and real Bible faith is bloody. It's hard, and it's work, and it's warfare with the world," he says. "Life is hard. Once you realise that and accept that, then you can learn how to deal with things. But if you come at it from the point that difficulty and hardship are bad things that need to be controlled in order to get onto the normal part of life where things are fine - to me that's backwards."

By the passion and conviction in his voice one can sense that he's been there. Michael's own roller coaster ride to his current musical status is testament to this feeling. After playing in various LA bands and securing a recording contract with A&M, Michael watched his second album get dropped when Polygram bought the label. When he moved to Nashville in 1991, he drove across the country on his motorcycle in the freezing cold with his possessions on his back.

Michael soon signed a songwriting contract with BMG, penning such hits as "I Need You" for Russ Taff, "No Loving You" for John Fogerty (of Creedence Clearwater Revival fame) and perhaps his biggest financial success, "Maybe It Was Memphis". When his contract with BMG expired, Eddie DeGarmo asked Michael if he wanted to pursue a songwriting and recording option with ForeFront. From this, 'Saints And Sinners' materialised. Although he is writing Christian music, Michael's songwriting philosophy is no different now than when he was writing mainstream songs. "As Christians, we're called to tell the truth - to interpret what is going on in a real perspective. I write really honest, truthful songs. I tell the truth - whether it is in a spiritual context or not," Michael says.

As a- songwriter, Michael believes Christian music should strive for reality. "It is imperative for Christian music to talk about the places where people re hurting - that's the reality of the world. Stop being afraid of the fact that Christians go through hard things. It is self-evident."

And painful, difficult experiences often serve as the bridge between people and between artist and listener. He offers, "You have to connect with people. The more disconnected and unreal artists become, the less people are going to relate. With Christian music, it seems so ironic that the ultimate reality is filtered."

But Michael is quick to point out his support of Christian music, even though he has his criticisms. "I believe in Christian music, as imperfect as it may be. It has a real role in modern society."

Met Michael years ago in a resteraunt with
Johnny Cymbal (rest his soul) Great to see
Michaels making Music for the Lord!
God Bless Him, all the best Dave Perri

is this the same MICHAEL ANDERSON that worked/got help at TAXI. IF HOW CAN I CONTACT HIM TO BE A MUSIC STUDENT OF HIS.