Michael Speaks: A US vocal talent switching from mainstream R&B to gospel 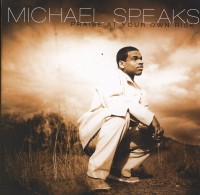 Mike: What's the first singing that you can remember doing?

Michael: It was definitely in church as a child, probably about five or six years old, wailing away at "God Has Smiled On Me". That was one of the beginnings of my discovering my talents.

Mike: Were you quite precocious as a kid?

Michael: Pretty much yeah! (He laughs) I would sing a lot in the house as well while my brother stroked away on the piano. I would be just the same at church or in a grocery store. Just bust out in a note wherever I felt the need.

Mike: Was it inevitable that you were going to become a singer?

Michael: Definitely. It's kinda like I always knew I was gonna do it. I just walked in with the strong faith that I knew that's what I would be.

Mike: Is it true that you were discovered singing on the street in New York?

Michael: It is! Arriving in New York, I came out of the bus station and saw a group singing. I said, "Man! That's what you must have to do to get discovered," so I just began singing. People were stopping and dropping money and I thought it was cool. I would do this everyday and then at night time I would go sing at all the hot spots, the supper clubs and cafes where all the stars hung out. I really grew popular on that scene. One day after singing in the subway, a guy walked through the crowd of people around me and said, "You need to be in a studio." I said, "That's why I'm here." He said, "I'll tell you what, meet me in the Time Warner building tomorrow and I will get you a record deal." I sang for this guy and his partner, who was working at Jay Records at the time, and he said, "Man, this boy is incredible, let's do this." They took my clothes size, shoe size, switched my image up and the next thing you know a huge bidding war started. I signed the biggest new artist deal of 1994 with East West Electro Records. That was the birth of my professional career.

Mike: You recorded a debut R&B album 'No Equal' and then God got hold of you didn't he?

Michael: I began working on my second album. They had poured in big money. I was working with Baby Face, Timberland and Missy Elliott. I was about five songs into the album when I came to an abrupt decision because of a conviction that had been growing in me for some time that I couldn't do this anymore. I stopped recording about six figures into the budget The company said, "Oh no! What do you mean? You have to finish this!" And then they offered me a huge gospel deal as well. I said, "No thank you. Right now I really have to go and just find peace and I can only find that in Christ." It was at that point where my life took a tremendous spin. I began to tour with some gospel stage plays and a year later I finally got the release from East West Electro Records. I was out on tour when I got the news. I went out to LA and did some stuff with Dave McPherson at Epic Records. Immediately they did the deal so that was my transition from R&B to R&P. Rhythm & Praise! That's when I found my new faith and began to study the Bible and really got rooted and grounded so that I could go out and really represent God and his music well.

Mike: You've called the new album 'Praise At Your Own Risk'. Tell me about that title.

Michael: Taking the transition from R&B to R&P I took a tremendous risk because I had already established a solid career in the R&B world. I already had a foundation laid and built. The money was right there, so it was a risk to jump off security to build the other side in Christ. The inspiration for the title came from when I performed at the House Of Blues here in LA. Sylvia St James, the coordinator for it, was trying to get me out to Vegas to do the House Of Blues Gospel Brunch out there. She said, "I just gotta warn people when they come to see you; you just have so much energy. I'll tell 'em to come at their own risk. Praise at your own risk." It's just taking risks that have guaranteed returns unlike stocks and bonds. To take some positive risk was my challenge to the world.

I Love Mr. Speaks testimony. It is powerful within itself. I just heard him for the first time on Gospel Radio singing a song which said, "Praise your problems away" and it touched my inner man. Where is he at and what is he doing these days?

Really love this man's voice and his decision to move forward in faith. I really hope to hear something from him soon. Hope this gets to him - if so Michael - God knows and he IS pleased!

Hey, i looked up this artist because he has the same last name"speaks"... never dreaming that the jounalist was a local guy...Mike Rimmer. will have to check him out. keep up the good work brother.!
Wendy
encouraging article about "praise at your own risk"..