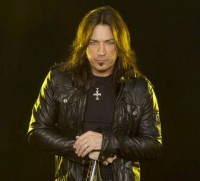 Michael Sweet may be a veteran rocker but he's not a man to rest on his laurels. Since Stryper came out of retirement in 2003 he's been busy gigging with the one-time glam metal band; he recently released a solo album, 'I'm Not Your Suicide'; had his autobiography Honestly: My Life And Stryper Revealed published; produced the new Stryper CD/DVD package 'Live At The Whiskey'; and early next year will be releasing an album credited Sweet/Lynch with legendary guitarist George Lynch of T&N, Dokken and Lynch Mob. To catch up on Michael's multifarious activities Cross Rhythms spoke to the singer, guitarist and producer.

Tony: I'm impressed that you're doing any interviews after your trial-by-interview with Doug Van Pelt for your biography. I understand Doug's interviews totalled 16 hours.

Michael: I'll take on almost any interview: I enjoy talking to people. There are some I don't welcome with open arms, but I love to talk to people.

Tony: Your autobiography Honestly: My Life And Stryper Revealed is out. Are you happy with the response?

Michael: I am, all things considered. There were some disappointments along the way. For example, it was edited three times, by three different people. There are a number of reasons for that - but what's disturbing is that after three editing sessions it's still not right in terms of typos and grammar. That's a little frustrating. Number two is probably an even bigger frustration - the fact that when it went on sale on May 6, within a few days it had sold out because the company that published the book did not print enough copies! It wasn't available for like two months, literally days after it came out. I was upset about that. The way it works in the business, as I'm sure you know, is you want to be ready for whatever you get: you evaluate, you press up enough so you can ship out enough. That was just a big mistake that cost everyone - not so much in terms of money but aggravation.

Tony: I had the opposite problem with a book I wrote. It was successful, but the publisher printed too many copies to sell. I ended up finding a massive great stack of them in a remainder shop is Brighton, selling at a really cheap price. I eventually discovered on eBay that my book was now considered a collector's item. My daughter took pity and spent Â£70 or Â£80, which was way over what it originally sold for.

Michael: I've done the same thing: I've repurchased things that were Stryper collectibles and paid 10 times what they were worth 10 years ago. What happened was I had a break-in at a warehouse of mine back in 1996, and I had a lot of my stuff stolen. I've subsequently purchased a few things on the internet and paid dearly for them. I had many of my guitars stolen, my old costumes: it was a sad day.

Tony: The Lord teaches us to hold on lightly to our possessions.

Michael: I always remind myself of that. We have sentimental value to certain things, but at the end of the day, when we're dead and gone, we can't take any of it with us.

Tony: I'm thrilled that Stryper have got a new album coming out. It's wonderful! I admire longevity.

Michael: It is really astonishing. By the grace of God, we've been blessed and given opportunities many other bands have not been given. To still be sitting here, recording music and touring, doing what we do 31 years after the fact is really amazing - especially in the music world we live in now. We're very blessed and thankful.

Tony: When you play a gig now, and you look out on the audience, is it all people of a certain age, or are there lots of young people as well?

Michael: What's interesting - I ask the question every night at every show how many people have seen Stryper before and how many have not. 15 years ago, the majority of hands were people that had seen us; now it's reversed and the majority of hands are people that haven't seen us. Mostly people in their late 20s to late 40s, but you'd be surprised at the percentage of young people whose parents turned them on to Stryper and they're wearing their parents' old t-shirts. It's amazing.

Tony: I suppose that's the dream of every musician.