Miles Cain: A York singer/songwriter who's miles ahead 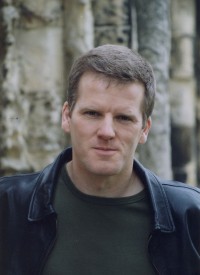 Tony: Down the years Cross Rhythms has reviewed various Miles Cain releases but you are still a bit of a mystery man. Give us a biography.

Miles: I started playing when I was a teenager. Syd and I played in our first band together in 1989, when we were 17. We were trying to be like the Alarm and John Mellencamp, who we were both into. It was very exciting. The band played two gigs and split up! Looking back, we were terrible, but I've always believed in that line from The Commitments where Joey the Lips says "It's a start, I believe in starts." I could barely play, and couldn't sing, so to have grown from that to where I am now has been a wonderful journey, because it really did come of the passion for music. I've worked very hard for it, it's like the Bruce Cockburn line : "Nothing ever comes without some kind of fight". When I started, I was a complete amateur but was in love with music, really gripped by it. That punk attitude of "we can make this work if we want" was crucial. We went on from there. I started to develop a voice of my own in the early '90s, and it's grown from there. I became a Christian in 1989, so faith and rock and roll were always tied up together for me. It was an important year - I had my first girlfriend, played in my first band. I went forward at a Billy Graham event - he was live via satellite, but what he said made a real impact, I can still remember some of what he said. I took my faith seriously, and in 1994, after University, I worked with Hull Youth For Christ as a Youth Worker. I lived in Hull for 8 years and I tried to be true to those gospel values. I worked on an estate as a youth worker for one of the churches, and in Hull Prison as a Chaplian. It's amazing to get that perspective on life. So many Christians live a safe and cosy lifestyle. Those experiences shaped me a lot, and influenced the songs on the new album (see "Poverty Of Heart"). My faith has changed a lot. I don't listen to Christian music very much, but I think Bruce Cockburn is an incredible inspiration. I admire Martyn Joseph for his integrity - he was another person that was encouraging - I would send him demos and he would send back a postcard saying "keep going". That kind of thing means a lot, especially in music when it's hard to get anywhere. Otherwise, I like Juliet Turner and Iain Archer.

Tony: I was intrigued by the song "Not Everybody Makes It To The Light". Give us your thinking behind that song.

Miles: I was living in Hull and observing lives of people there. I knew some people who seemed quite broken in different ways - they were fragile and sometimes victims of their environment. Some people I knew died of drug overdoses. The song can be interpreted in different ways - one way is how people grow and develop in this life - whether they grow spiritually and emotionally. I hope it's not too negative. I really like the lyrics in that song, they're some of the best lyrics I've written, I think.

Tony: I understand 'Different Destinations' was recorded over four years eight months! Why so long and what was it like working with Paul Davies?

Miles: It wasn't intentional that it took so long! All the tapes I did when I was younger were done in a few hours. Both Paul and I had day jobs and he was juggling a number of different projects at the same time. In one way it was really good because we were able to reflect on what we were doing. Some songs were recorded and never made it to the album, others just got better and better. A lot happened during theÂ four years - I got married and moved from Hull to York, Paul moved house twice...and of course all the troubles in the world started in 2001. Paul is fantatsic to work with - he loves music, and understands bands and songs and arrangements very well. He's quite experienced now, and recently left his job to concentrate full time on Tollbooth. He deserves success - he is one of the most talented people I've known.

Tony: What now? Is there going to be a tour?