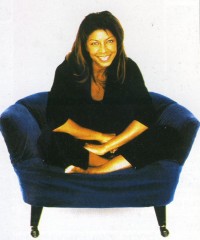 People often ask me why I got into drugs. I think the drugs were just waiting to happen, a culmination of not having resolved things in my life. My father's death was the beginning - it wasn't till years later that I was able to understand I was still grieving for him, and that as 'the-daughter-of' I was still walking in his shadow."

It was the '70s and everybody was doing his or her "thing". After trying a variety of pills, then LSD, Natalie got into heroin and got hooked. In a "how low can you go" mode, she went from bad to worse, flirting with a life of prostitution and cheque forgery. On her 25th birthday, while in Toronto for a gig, she was busted for drugs. "I was put in handcuffs and taken to police headquarters," she recalls in her recent biography. "The laws are deadly regarding drug possession in Canada; also I think they expected to find a lot more than they came up with. After I was booked, fingerprinted and photographed, they brought me into an interrogation room, shined a bright light in my face and kept asking me, 'Where are the kilos? We know you've got some kilos...'"

Following the ordeal in Canada, Natalie moved to Chicago and lived with her aunt. It was there that she met songwriter and producer Marvin Yancey, who would change her life. In 1975 her first musical collaboration with Yancey resulted in the release 'Inseparable'1, which soared to the top of the charts. After capturing two Grammy Awards, Natalie's success as a solo artist was assured. It seemed as if her life was moving in the right direction. The next year she consummated her musical collaboration with songwriter/producer Rev Marvin Yancey - in a matrimonial way. The late Yancey was a talented pastor (Fountain Of Life Church, Chicago, IL) and musician and his 1979 album, 'Thank You', featuring Natalie on the title cut, garnered a Grammy.

The singer relocated to Los Angeles but soon both Natalie and her husband were using drugs. Natalie remarks (in her book), "I'm sure this is difficult to digest for some of you. And the question begs to be asked: How could a man commissioned to spread the Word of God be doing drugs? The best way I can answer that is to say this: God's preachers are his when they are in the pulpit. But once they step down - they are only men."

The couple divorced in 1981. Marvin, who would die four years later, sought help for his drug habit. But for the next three years Natalie's life spiralled downward into a haze of drugs, gigs and men. Finally, with her career scraping bottom, Natalie agreed to go to rehab. Even then, she was in a state of rebellion. "God has a way of putting a hedge around his children," she says. "You can't get out and no one can get in. He knows how to get our attention. You will have to deal with him - sooner or later. But for someone like me - stubborn and hardheaded - it was just my nature to fight and resist the inevitable. And you couldn't tell me nothin' because I was still trying to swim upstream in that river called Denial."

In 1984, Natalie came out of the rehabilitation centre determined to make a comeback. She reminisces, "I had not touched a drug since November 29, 1983, and it really took that five years - five and a half years - to get back to where I was before all this happened. Those years were not that pleasant, but at least I got through them sober and that was the most important thing. Most recovering addicts would say that we've been to the other side and have seen the jaws of death. We've looked into the face of despair; we have been to the land of no return. Some of us came back; a lot of us didn't. This is where gratitude continues to prevail."

But somehow it seems Natalie had merely transferred her addiction from drugs to men. "Since Marvin and I had separated and divorced," she states, "I had had a lot of boyfriends. I don't think I was alone one day - give or take a few weeks here and there. I went through a large number of men; and Honey, I can't remember half of them. I wasn't intimate with all of them; it was just a matter of having somebody - anybody. Frankly, that's the dilemma so many of us women find ourselves in. We've been so brainwashed into thinking that if we don't have a man, there's something wrong with us. That mindset just begins a whole litany of bad decisions and it invades other aspects of your life. You find yourself making choices based on a strategy of how to get another man."

In 1989, true to the "she's-gotta-have-a-man" form, Natalie married Andre Fischer. The wedding was a lavish affair, but that didn't make the union any more lasting. Natalie says, "It was a beautiful wedding and that night everybody but my mother was smiling and happy, especially me. But this was one of those times when my mother's instinct was dead on. Compared to Andre, my mother adored Marvin. I think she saw through Andre's faÃ§ade from the moment she met him. He was a loser and she knew it. But you sure couldn't tell me that. I had to learn for myself."

Her marriage became abusive and coupled with a lawsuit brought by her mother, suing for her father Nat King Cole's record royalties, times were often extremely painful. After her divorce in 1997 another abusive relationship followed. Then, finally, she "got it." Natalie affirms that the journey has been long and the road has had a lot of curves, but she is in a good place - at last. "There's a myth that's still out there about how a woman needs a man to feel complete, and I was one of many victims of that school of thought. But I've stopped looking at myself as 50 per cent of 'two' and now I'm very content to be 100 per cent of 'one'."

Although she was raised Episcopalian and regularly attended church as a child, Natalie says she really embraced a relationship with God later in life. "I would say that the real realisation of not just who God is, but who Jesus is, was maybe when I was in my 20s."

Natalie credits her father's sister, Evelyn (Aunt Bay), with teaching her about Jesus. "She brought the knowledge of Jesus as a person into my life," Natalie recalls, "and I started looking at the faith in a whole different kind of way. It seemed that it was something I was searching for, because what I was missing was that joy - the joy I had heard people talk about in the midst of trials and tribulations and all of that. So by spending time with Aunt Bay, I saw miracles happen in her little home that let me know there was something more than just what I had experienced as far as God was concerned.-He actually sent people into my life and there was a role model that I could relate to, and that was Jesus. It was like learning the Bible all over again like a child. I ended up changing my denomination to Baptist." For the past several years Natalie has been a faithful member of Mt Moriah Baptist Church in Los Angeles (pastored by Dr Melvin A Wade) "They say when you make a conscious decision to become an every day Christian then 'the Enemy' really gets busy."

These days, Natalie says her faith is her anchor. "I was reading in my devotional the other day about childlike trust and how Jesus said if you have faith as a child you're so much better off than having the attitude of an adult. Because, as adults, we are questioning and we are difficult. I still have that childlike faith and I still have that awe of him; and I really thank him for that because it's helped me to be a little more open to what he's trying to do with me."

A gifted beautiful person inside and out .Her spirit is now in heaven without any pain.So glad she had Jesus Christ in her heart.B