Nathan Sheridan: A Nashville-based singer songwriter with a tale to tell

Tony Cummings quizzed the man with the radio hit "Starts With You And Me", NATHAN SHERIDAN 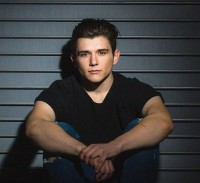 Nathan Sheridan emerged into the CCM bright lights in 2018 with his powerful debut album 'Broken With You'. Cross Rhythms radio subsequently picked up on Nathan's "Starts With You And Me" which has a particularly appropriate message in the troubled times through which we're passing. I spoke to the young songsmith to find out more about his life and music.

Tony: I'm reading a bit of your biography and you've had, shall we say, an interesting life. In your childhood you lived in a dilapidated trailer park in Pensacola and your mum was addicted to drugs and your father was unstable. You had a tough life in those early days, mate.

Nathan: Yeah, definitely. My parents just couldn't take care of me or my sister because of the drugs. It was a pretty unfortunate time. I was back and forth with my grandparents so much. My parents always wanted to raise us when it was convenient for them and they thought they could handle it again. It almost never worked out, so it was almost the last straw whenever we were in Pensacola, living in that trailer park. It got so bad that my mom ended up selling everything in the house for drug money and my dad ended up leaving. My mom called my grandparents in the middle of the night and said 'hey, come get the kids. I can't raise them anymore'. So that was kinda how my life started and it's a long, long story from there.

Tony: I understand you were around 14 when things really changed for you.

Nathan: Yes, I became a Christian at 14 years old. My grandparents, they picked me up and showed me a better way. Thank God for that. I was able to accept Christ, I was able to be shown Christ. They showed me Christ and I went to a play called Heaven's Gate, Hell's Flames and I wanted to accept Christ that night. Life's never been the same since.

Tony: Had the music thing taken hold of you by then?

Nathan: No, I hadn't really done any music at all. I hadn't even sung in the shower so it was kind of a funny thing that I started getting into music at all, because I wasn't really fostered in that environment. At 15, I got my first guitar from my much older sister for my birthday. That was when I actually ever played any music at all. And I didn't even get serious about playing guitar until I was more or less 17 years old.

Tony: Did the gift develop swiftly?

Nathan: I think it did, because I had such a love for it at that point, and I think it took a lot of encouragement from friends and family and from church members as well. I kind of got started in youth group, playing and singing. It took a lot of encouragement from the people around me to say 'Nathan, we think you can do this and we think you're a good singer. We think that the Lord's given you a gift'. They would say things like that to me all the time, and I think that's what kept me going, helped me realise I did have a gift, even though I hadn't had the best upbringing, even though I hadn't been fostered in a musical environment, that this was something new and exciting that I think I could just dive right into.

Tony: Tell me a bit about your recording history.

Nathan: I did a small demo with a buddy of mine, and that's what led me to going to Nashville. We got invited and that's when I met up with Jeremy Holderfield, who is the lead guitarist with the band Seventh Day Slumber and a record producer. Me and him did some songs together. As soon as I did those songs, I did a small EP, 'Nathan Sheridan'. I'm going to release it one day. We did that together, and that's kind of how I got connected with a lot of people in Nashville. I ended up moving there. I got signed to a label, Burtonwood Records, who've got distribution through Capitol. I went on a national tour and because of that I was able to cut a record. It was just divine orchestration one after another, man. It was not something that I ever foresaw, because before that time I was in the military, I was doing everything except music as a career. It was something that was way out of left-field, and I think it may have even taken my family by surprise.

Tony: Everybody knows that Nashville is like music city. There must be vast numbers of young hopefuls turning up in Nashville hoping for the break. But somehow it just happened for you, didn't it?

Nathan: Yeah, and that's so true. There're so many people here that are far more talented than me. The person giving you your chicken and biscuits at McDonald's in the morning can sing, you know, everybody here can sing. There's nobody here in Nashville that can't play some type of instrument. You'd be hard pressed to find someone like that. The fact is there's so much talent here and so many people coming here to get their big break, but it happened more naturally for me. . . at the end of the day it was not something I did on my own.

Tony: Years ago I heard a country song about Nashville which had the line, "Nashville, where they sweep broken dreams off the street". There must be an awful lot of broken dreams in Nashville.

Nathan: For sure, man. Especially in the bar and pub life, people are playing in the bars and pubs and clubs and whatnot. It's just a vicious cycle. To be honest with you, I don't tour, I don't do a whole load of shows here in Nashville lately, though I actually had one tonight I was going to do. That got cancelled because of the virus. But people definitely come here in hopes of a better life. It's kind of like the musical American Dream.

Tony: Tell me about your song "Starts With You And Me".

Nathan: That was more of a funky, bluesy tune that I wrote. It's kind of relevant even now, but just all of the craziness going on in the world. You have the political divide, the cultural divide, and we even have stuff going on now with this virus. It's a song about change, the things that we need to do are the things that need to happen. A greater change needs to start with us. It's almost like a clichÃ© kind of premise but it's kind of like the saying 'sweep rooms, sweep the front porch first'. If everybody just swept their own front porch, the world would be a cleaner place. That was one of the things I used to write this song. It just rings true for me. If everyone would just do one nice thing a day for somebody, the world would be a better place. In theory, it's such an amazing idea. It may sound utopian in a way but it really does. Obviously, there's a spiritual aspect in it too. God and Jesus have restored us.