NewSong: From Southern gospel to Christmas Shoes to One True God

When, at the beginning of this year, award-winning American CCM group NewSong released their 'Swallow The Ocean' album group member Matt Butler said, "We have spent our whole lives trying to be artists and musicians who describe God's love. So the impetus behind the record is to use music for that purpose - to introduce God to people who don't know him. If we were to fill the entire ocean with ink, and if we were to take pens and try to write the love of God across the sky, we would drain the entire ocean dry and still not even come close to touching the surface of God's greatness and the bigness of his love; that has become the heartbeat of this album."

The newest album by the group from Valdosta, Georgia is NewSong's 26th release in their 32-year career. Frontman Russ Lee talked about the veteran group's underlying motivation. "Music is just a vehicle to throw out lifelines, share truth, shine light and bring hope. The methods have changed; the music has changed; but the Message will never change. It's still the hope of the world that everybody needs and we can't believe we get to use music as a tool to share that."

Initially compared to the Bill Gaither Trio and The Imperials, NewSong's chosen musical style was originally Southern gospel. Valdosta, Georgia, is located just a few miles from the Florida state border, and in truth has little of note to entice visitors, save for a couple of churches. One of these is the Morningside Baptist Church where in May 1981 two friends came together and decided that they wanted to communicate the Gospel by forming a vocal group. Guitarist Eddie Carswell and vocalist Eddie Middleton were joined in the same month by Billy Goodwin. Years later it was Goodwin who explained the group's long-standing philosophy which has stood them in good stead throughout their career. He said, "The commitment that we made was, 'God, we'll do this as long as your hand is on it, as long as we see you working.'"

By the time they had released three independent albums (including an intriguingly titled third album called 'All The Best'), another vocalist, Bobby Apon, became NewSong's fourth member. He joined just in time for the group to sign to Covenant Records, with whom they released 1982's 'The Son In My Eyes' album. The group then moved on to the Southern gospel powerhouse Canaan Records, who were by then a subsidiary for CCM music giant Word Records. Following the release of 'The Word', Word themselves picked up on the hint and signed them to their main roster. For, just like the Imperials, NewSong were in the process of moving from Southern gospel to a soul-tinged pop sound. They recorded three further albums for Word and two songs, "What Goes Around Comes Around" and "Light Your World", got some CCM radio play.

NewSong moved onto DaySpring Records in 1990 with whom they released two albums; 'Living Proof' and 'One Heart At A Time' - essentially a 'best of' featuring 12 songs with which the band had enjoyed Christian radio play. "Living Proof" did fairly well while "Wholehearted", a reworking of Michael Bolton's "Soul Provider", less so.

It was a change of record label and a change of personnel which was the catalyst for NewSong to become CCM big hitters. Original co-founder Eddie Middleton and newest member Bobby Apon opted to leave the group during their signing for Benson Records. Middleton left to pursue his goal as a mainstream recording artist while Bobby wanted to spend more time with his wife and five (soon to be six) children. Tragically, he only enjoyed six more years of happiness with his family before passing away in 1999. As way of tribute, NewSong's 1999 greatest hits CD 'Arise My Love: The Very Best Of NewSong' was dedicated to Apon's memory. 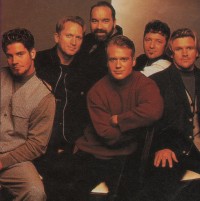 In 1993 Eddie Carswell and Billy Goodwin held auditions. As Carswell explained, they were receiving help from above when recruiting more members, "The Lord just kept laying people in front of us. We had an open audition and 10 or 12 guys came in. They were really talented and any would have been great but the Lord said these are the guys that should be in the group." Charles Billingsley, guitarist Leonard Ahlstrom and lead singer Russ Lee were all taken on as group members following divine intervention.

Carswell was impressed with the youngster Billingsley who had sung solo when opening the first show NewSong performed following the two original departures. By the autumn of 1993 Billingsley was in NewSong. Talking about this moment in his life, Atlanta-native Billingsley commented, "It was kind of like growing up watching the [Dallas] Cowboys [American gridiron team] and then getting drafted by them."

If Billingsley felt honoured to be drafted by a group he had long admired, it can be fair to say that the group's next member had probably never heard of NewSong, let alone thought about joining them. Born in Cleveland, Tennessee, Russ Lee faced up to demons in his own life and his family life before finding faith and becoming a pastor and a member of CCM touring and recording unit Truth. In Cleveland a mutual friend had put Carswell in touch with the former Truth vocalist. "There was an immediate kindredness (sic), a sort of reuniting of people God wanted to be together," said Lee. "We felt we had been together for years."

Lee and Billingsley were soon joined by Scotty Wilbanks and Leonard Ahlstrom. The former played the keyboards and saxophone while the latter became a long term songwriting partner with Carswell. Both Wilbanks and Ahlstrom bonded immediately and when touring would often jam on stage as a duo to the delight of the crowd. By March 1994 the new incarnation of NewSong unveiled their new look. Gone were many of the harmonies so beloved of older gospel and soulful groups, instead the band looked towards a slicker pop rock direction with a sound a bit like PFR and The Kry. Their musical change was successful and the album 'People Get Ready' reached number 16 in the US Christian charts, their most successful album to that point.

'People Get Ready' should have been the launch pad for greater commercial success in the CCM charts but two further albums, 1997's 'Love Revolution' (number 25) and 'Joy To The Rhythm Of The World' (which failed to chart) left the group once more at a crossroads though NewSong did have four number one songs on the CCM Adult Contemporary charts, including "Miracles" which stayed top for four consecutive weeks. NewSong appeared in rude health come the end of the year, with an award for Group Of The Year handed to them by Christian Research Report.

There were though deeper problems besetting the group, despite lead singer Russ Lee arguing to the contrary. He told one journalist, "The greatest thing is the camaraderie. You've got six guys who are highly capable but we all enjoy the other guy being in the spotlight as much as we enjoy it ourselves. I think it's called friendship." That may well be but what Lee said next hinted at a power struggle within the group. "We're very competitive and we enjoy our moments but we also enjoy someone else hit the home run." The competitiveness may or may not have led to the departure of Charles Billingsley in 1996 (the singer going on to establish a lengthy solo career), whilst the camaraderie Russ Lee spoke about did not prevent him from leaving the group in 2000 to pursue a nine-year stint as a solo artist.

It was also in 2000 that Scott Wilbanks and Leonard Ahlstrom decided to depart from the group although both would still play influential roles in the group's future musical progression. Ahlstrom stayed in the music business, helping a friend from Florida to manage a record label, whilst Wilbanks would rejoin the group briefly in the mid-2000s. Matt Butler was a direct replacement for Wilbanks in 2000, with Stephen Reischl and Michael O'Brien joining the group a year before Lee, Wilbanks and Ahlstrom formally left. Goodwin and Carswell featured in the new lineup along with keyboardist Michael O'Brien on lead vocals and melodies; acoustic guitarist Stephen Reischl singing vocals and Matt Butler offering help with keyboards, cello, violin and accordion, as well as singing backing vocals.

It was this line up from which NewSong produced their most famous work to date. The group's last release on Benson was a Christmas-themed album called 'Sheltering Tree' which charted at number two on the Christian music chart and broke into the US Billboard 200. The album itself was planned to be 12 songs long, with five original compositions and seven standard songs. Eddie Carswell wrote "Christmas Carol", perceiving it to be a strong lead track to promote the album. He said, "I had an idea to write a song about a lady named Carol who lived in a nursing home and was known as 'Christmas Carol' because the only thing which kept her alive was singing Christmas songs." As it turned out though, "Christmas Carol" would become just a footnote in what was to become a hugely successful yuletide album.

Iâm looking for albums by Newsong from the 80âd and 90âs. Where can I find them?

from the first time I heard this group I loved all their music. I bought a few of their cds/ money was tight. they were stolen but I hope whoever ended up with them was blessed! we are listening tonight to some before we to Bible study. I thank God for such a great Christian music group

For more on NewSong visit the NewSong artist profile