The worship leader at London's St Mary, Bryanston Square, Nick Herbert has made steady progress since he first emerged onto the scene with his 1999 independent album 'Creator'. That produced a surprise Cross Rhythms turntable hit. Since then Nick has been signed to Survivor Records and after the success of his mini album 'Blameless' (2004) the gifted singer/songwriter has delivered an impressive album 'Praiseworthy', produced by Paul Burton and Tom Mills. I caught up with this busy young man to pitch some questions at him.

Craig: When did it become clear to you that God wanted you to be a worship leader?

Nick: When I first became a Christian I had lots of prophecies about being a 'leader' - I tried my hand at lots of things and God seemed to show up when I led worship. Then when I moved to London and first led worship as a student at St Pauls, Onlsow Square, one of the leaders of the church had another prophecy for me, that I would be the worship leader there. I've now been working for St Mary, Bryanston Square for about eight years.

Craig: Has living and growing up in London helped you or hindered you in becoming a worship leader?

Nick: I was already leading worship before I came to study in London so I don't think there is anything unique about a place, it is more important to be called. However when it comes to working for a church as a worship leader, you could say that London has more churches and because of the larger congregations, maybe more able to employ a worship leader and want to do so because of the demands of a large city church. I think for me meeting up with John Peters, who is my pastor, has been really important not least because he has taught me so much about worship leading and sees it as a priority.

Craig: You attend a church of over 1500 people with an average age of 23. How much has this encouraged you in your songwriting and worship leading, as well as being an up and coming artist?

Nick: St Marys is in partnership with an organisation called Artisan which seeks to support, network and pray for Christians in the media, arts and entertainment. This has been a great encouragement and has meant we have a lot of creative 'arty-farty' types around! I suppose there is a real desire in our church to be creative and allow for that so I always feel encouraged to write new songs for the congregation.

Craig: How do you find leading worship at such a huge event like Spring Harvest?

Nick: It was a great experience and privilege. It is fantastic to be able to lead a slightly 'larger than normal' congregation simply because you have more voices making a bigger sound! With loads of young people you can really celebrate and use some of the anthems written for such events that you might not be able to use in your local church but also take a few risks and maintain a sense of intimacy.

Craig: What are the main points that you try to get across in your albums? 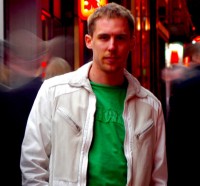 Nick: I think every song on the album has a slightly different message, but I hope what comes across is something real and passionate and a desire to simply go deeper with God!

Craig: What are the Soak meetings that you have in your church and how have these helped with the recording of your new album 'Praiseworthy'?

Nick: Soak services occasionally happen on Sundays and are dedicated to meeting with God and worshipping him. A typical Soak will be themed; some themes have been 'One thing people', 'the zeal deal' - all trying to take a different angle on what worship is all about. I will usually say a bit and then we will have an extended time of worship and ministry. This is often accompanied by creative elements such as live art, drummers, film footage, as well as having a worship band, that all serve the theme. I've often introduced new songs at these services and these have been a good place to see if the songs are helping others to worship. This has then been one of the main criteria for me choosing songs for 'Praiseworthy'.

Craig: How do you feel you have progressed with your new album lyrically and musically?