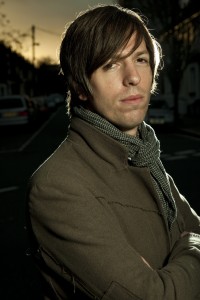 Nick Drake recounts how in the early years of his music career he once received a cheque for royalties due to someone else called Nick Drake. That "someone else" was of course the British acoustic singer/songwriter who died in relative obscurity in 1974 but subsequently obtained a major cult following amongst devotees of mournful acoustic music. Christendom's Nick Drake, then with the band Coastal Dune, duly returned the cheque but remembered the name confusion. So when he had the opportunity to release a solo worship album Nick added the J (his middle name is James) to his nom-de-disc. He told Cross Rhythms' Tony Cummings, "It's funny because when I was growing up Nick Drake wasn't famous at all. It's only been the last five or 10 years. Anyway, that's the reason that with my new album 'All For Christ' we put Nick J Drake instead of just Nick Drake."

Born in the Wirral (somewhere between Liverpool and Wales!) to Christian parents Nick recalls that matters of faith never really interested him as a child. "I grew up in a Christian home but I have to say that it wasn't until my mid-teens that I found the Holy Spirit who made it all real for me. Then I went to university in Durham, did theology there and met Becky. We were in a band called Coastal Dune. We were trying to play in secular venues so to speak because we were born in university pubs, in various colleges around, so we had a heart to reach out and be more of a secular band but with Christian values. We did that for quite a few years. Two years full time, after university, it was a great period of learning and growth and learning about ourselves as well and what we wanted to do."

Coastal Dune never quite landed the big mainstream deal but the band, fronted by Becky and with Nick on guitar, Andy Wolfe on keys and Nick Thorley on drums did leave behind some stirling independent releases - 'If And When' (EP, 1999), 'Till We're Old' (EP, 2000), 'BlueGreen' (2001) and 'Survive' (EP, 2002), the latter two producing the Cross Rhythms turntable hits "Contagious", "Joy" and "All That's Good".

When Coastal Dune called it a day Nick and Becky moved into worship ministry. He explained, "I've been worship pastor at St Paul's Hammersmith, a Holy Trinity Brompton church plant, since 2003. It's a massive Anglican building that everyone passes as they drive into London from the West and we view it prophetically as the 'gateway to London'." 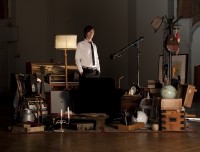 The jump from performing at pubs and clubs to leading hundreds of Christians in worship at St Paul's every week proved quite a challenge at first but Nick feels blessed by the way in which God used this to reveal yet another talent and passion he and his wife share. "When we came to St Paul's, we suddenly had to lead 120 children and all the adults in worship, 15 minutes every week. We found that we were actually under resourced and that the songs that we had were not really engaging the children or the adults. I think that is part of the reason why a lot of churches stopped doing all age worship. We decided, we could do this, we could try and write some songs that could both engage the children, but also the adults enjoy and don't find cheesy or boring."

Out of this ministry have come two all-age worship albums by Becky and Nick Drake, 'The Big Family Of God' (2008) and 'God Is Here' (2010), released by Elevation Records. Full of great kid-friendly tracks, the CDs come packaged with sheet music and backing tracks, allowing them to be used by churches everywhere.

Nick explained, "The first one, 'The Big Family Of God', was the first collection of songs that we had used in church and had really worked for all ages. It revealed truths about God that children could engage with in a fresh way. There was a song called 'All Through History' which was a song that took us through the Old Testament through characters like Moses and David and said a little bit about what each character had done, and it had this worship chorus that went, 'All through history, God, you've been faithful'. We want to lead people into an encounter with God, in his presence; we wanted to take that same value and take it to all ages as well, so the songs try and combine truth telling about God but with choruses that release worship and encounter with God."

Now Nick has another string to his creative bow with Survivor Records releasing his first adult worship album, 'All For Christ'. The inspiring collection of worship songs, produced by the Weeks brothers, has quite a stripped down feel which Nick says is vital to what he wanted to achieve. "That's the sound of the album: organic - piano, drums - stripped back, simple, something that lets the music and instruments speak. Rather than turn out an iPod playlist of worship tracks we're trying to take people somewhere. We wanted it to work as a journey, something that starts with an invite to worship then moves in to a more reflective world. We end the album with the old hymn 'Come Thou Fount' which we've re-arranged and re-written to make it a more useable song in our churches today."

Nick continued, "We recorded 'All For Christ' at a converted chapel down on the south coast of England last year and it was a great space because part of what we wanted to do with the album was capture that blend of old and new in worship, the kind of Anglican tradition that my church is in, but also the suit of relevant contemporary worship."

Popular worship leaders like Ben Cantelon and Tim Hughes helped Nick to write songs that could fit in with a number of different churches' styles of worship. Nick explained how leading the worship at his church helped influence the album. "This question about how you marry the traditional with the contemporary has been really important for us. . . This is also the style of St Paul's, to pick the best of any stream and use them to create space in which people can encounter the Holy Spirit."

So have songs from the album made it in to the worship at St Paul's? Nick responded, "Most of the songs on that album have been used in worship at St Paul's. Some of them have been around for us as a church for quite a few years. 'Have Mercy On Me', which is based on Psalm 51 and is about repentance and coming back to God, has been around for a few years. We used that when we rediscovered the power of repentance in our church."

As a songwriter with a First in theology from Durham University and an MA from Kings College London you would be forgiven for assuming that Nick's songs may be complicated and very theological. But in fact Nick believes that worship songs are as much about the experience and the way they make the listener feel as they are about engaging the intellect. He said, "By their nature worship songs have to be simple. The idea of the 'songwriters being the theologians of the church' just doesn't make sense to me. These songs are not essays, they're poetry set to music and you can't be expected to get to the same place as someone writing a whole book. I'm about God's presence, I'm about encounter because that's where stuff happens and that's where people get changed. And it matters to me to have the theological language and map so that God's presence can be articulated well. Songs have to start at the heart level. In some way, I hope my songs are always born out of a place of encounter with God. Afterwards, I then work on crafting the song, checking flow, theology, lyrical turn and the song's focus."

With his years in Christian music ministry what has Nick learnt about the process? "I guess the thing I've learnt most of all is to seek God and to seek his Kingdom first and to seek what he wants for me and not to be distracted by other journeys or what God wants other people to do. I know certainly when I was younger I had more of a set focus in my mind of, 'I want this, this and this to happen'. I think the more I've let go of that, the more I have just sought God and served him in the local church here, God has then opened up the things that are right. For example, the whole all-family worship thing I would never have imagined would have happened, but that is part of what God has wanted us to do."

Cross Rhythms ended its interview by asking Nick what he thought might be next. Are there festivals and tours to come? "At the end of the day I'm here to serve a local church and consistently lead them in worship and it's only because I do that, that I have any authenticity in recording and doing bigger festivals and stuff. I would never want to be a travelling worship person; I want to be routed in a local church."

The opinions expressed in this article are not necessarily those held by Cross Rhythms. Any expressed views were accurate at the time of publishing but may or may not reflect the views of the individuals concerned at a later date.
About Joe Tattersall
Joe Tattersall studies multi-media journalism at Bournemouth University.

Just heard my first fantastic Nick Drake recording and then read your biography of this extremely gifted songwriter. But also heard he ended his life some time ago. I will listen to as much of his music as possible, but would like to know if it's true that he is no longer in this world. Please reply. Thank you.