Tony Cummings spoke to the Californian rapper with the Cross Rhythms radio hits "Atlas", "Act Of Love" and "Chapters", NOMIS 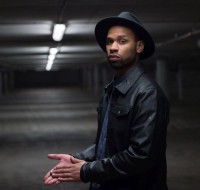 Anyone who's heard the latest Cross Rhythms radio hit single "Atlas" will know that this rapper from Oceanside, California, is an exceptional talent. Nomis honed his skills at California State University where he earned a bachelor's degree in visual and performing arts. He had "a makeshift release" in 2004 and over the next 16 years this most erudite and perceptive of wordsmiths has subsequently issued five full length albums and a stream of singles. Nomis has done gigs all over the USA, toured Trinidad, the Philippines and Thailand and, to quote from his biography, performed "everywhere from festivals, arenas, schools, bars, churches, street corners and living rooms."

Tony: You've had radio play in Europe but in the US Christian radio seems to play very little hip-hop.

Nomis: "Yeah, it's very disappointing - not just for me but for the genre as a whole. Christian rap music is treated as this alternative thing which they de-legitimise by the way they keep us away from their award shows and their red carpets and their radio stations."

Nomis: "I don't know who told you that, but they're completely right. The irony is that the radio stations organisers are living in the past. These days, there are a lot of white soccer moms that play hip-hop. These stations don't even realise. Playing our music will still fit with white soccer moms."

Tony: US Christian radio stations are also dividing audience racially, and we still see that split in the American Church.

Nomis: "I agree with you 100 per cent. A lot of people that run the radio world are of a particular race and age. They've been in the game for 20, 30 years. One way they know works, and they're not looking to change that. 20, 30 years ago Christian radio was represented by a certain demographic. They're afraid to try new things. It's a world that they don't know. Rappers and R&B artists make them uncomfortable. They don't get it, so they don't know how to navigate it, so they stay away from it."

Tony: You live in California, don't you?

Tony: Is that a beautiful place to live?

Nomis: "The title that San Diego has is 'America's finest city', and that's no coincidence. It's a beautiful day today: almost Christmas and I have a t-shirt on."

Nomis: "Most people don't know about that. You really did some deep digging. I used to be in a rap duo called Destined Misconception. It was me and my best friend, Dexterous. We were working on an album together in 2003, early 2004 - a group album - and due to life circumstances he moved across the country to Florida and quit rapping. We had already done 70 per cent of the album. I was like, 'I can't put out a duo album and then not be able to perform it as a solo artist.' So I finished the record by myself and put it out solo. But it really was a group production."

Tony: What was that release called?