Out Of The Dust: The music ministry couple talk about the realities of marriage

Tony Cummings spoke to the Tennessee-based duo who've gone through marriage and remarriage, OUT OF THE DUST 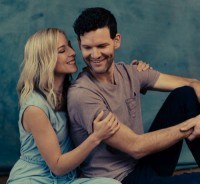 Out Of The Dust

By any standards, the Nashville-based husband and wife duo Out Of The Dust have an unusual testimony. Married in 2006, Chris and Steph Teague struggled with a lot of issues before throwing in the towel and divorcing in 2010. But then, after Chris' conversion to Christianity, the pair remarried and commenced a music ministry which, since the release of their first EP 'One Mic, One Night' in 2014, has gone from strength to strength. Out Of The Dust have had an impressive four songs, "How Deep The Father's Love For Us", "Radicals", "You Pursue" and "All That I'm Made For", on the Cross Rhythms playlist, and their second full-length album, 'Now More Than Ever', is out now. I spoke to the couple about their new album and their ongoing ministry.

Tony: What part of the USA are you guys from?

Chris: "That's kind of a weird thing. We didn't. We were sort of dropped here by divine providence or something. We were both born and raised in and around Nashville so we lucked out."

Tony: It's a bit of a clichÃ© but did you ever feel you were being led into country music?

Steph: "Being from here it's kind of ironic. My family did not like country music so I was not raised on country music."

Tony: Even though you lived in the home of country music. That's interesting.

Chris: "I laughed when you said that because Stephanie is so far from country music. I loved country music in the '90s and could sing every song on the radio but I've since grown not away from it but out of it. I'm not a huge fan of it anymore."

Steph: "I can appreciate it; I just didn't grow up with it."

Tony: The last time we spoke, back in 2015, you had your EPs out. It was 2017 that the album 'Out Of The Dust' came out. What's happened to you guys since that album? Have you played a lot more gigs? And done a lot more touring?

Chris: "Yes, numbers wise, it's been really awesome to see God work and move through what we were able to do. We were able to partner with a ministry called Our Daily Bread and they helped us put out that self-titled album. On the ministry side, it's been even more awesome to see God bring more and more people, our story becomes a magnet for people's broken stories and stories of redemption and we get to minister to couples and people all across our country and some of your country as well, a little bit. With stories of heartache and brokenness but finding purpose and meaning in the whole of their lives, not just the good parts but the hard parts too."

Tony: You've got a very unusual testimony, which we wrote about, the last time we wrote about you: married couple, the marriage broke down, you went your separate ways and then God brought you back together and you remarried. That's it in a nutshell, isn't it?