Now More Than Ever

Second full-length album for Tennessee's Out Of The Dust 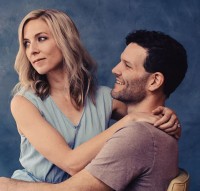 THE 13TH SEPTEMBER sees the release of the second full-length album by husband and wife duo Out Of The Dust. Read a press release about 'Now More Than Ever', which features guest appearance by singer Plumb and rapper Tony Tillman, "The album's sweeping orchestral arrangements sit side-by-side with imaginative pop production."