Out of Eden: Keeping their clothes on

R&B sistas Lisa, Andrea and Danielle Kimmey, better known as OUT OF EDEN, are selling records without selling out to MTV peep show. Andrea Kimmey spoke to Tony Cummings. 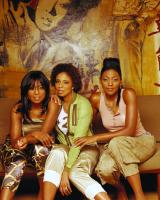 What is extraordinary about Out Of Eden is that they've been able to sell half a million albums, with each album selling more than its predecessor, without taking progressively more and more clothes off. For one of the sad things about girl group R&B is how, where once it conveyed bubbly, romantic preoccupation with the boy next door, today it is a knowing, bump and grind show of sexual lewdness. Yet Out Of Eden continue to buck the trend with stylish yet non-revealing stage clothes and songs of sexual purity and loving the Lord. The group's Andrea Kimmey is forthright in her view of Out Of Eden's resistance to the era of sexual permissiveness. "In the past our record label has gone to a mainstream company to explore crossing over. The people in the company would say, 'We love their songs, we love their voices, but we wouldn't know what to do with this group. These girls are too clean.'"

Yet Out Of Eden (Lisa, Andrea and Danielle) aren't three head-in-the-clouds idealists unfamiliar with the harsh realities of a sexobsessed society. Andrea continues, "While I was at high school most of the girls in my class had kids. They were simply not ready for parenthood yet it's constantly being communicated to them through the media, through TV, that the only way they're going to find love is to sleep with some guy. We've got a song on our new album called 'I Know' which was inspired by an email we got from a 15 year old girl. This girl had had three kids by the time she was 15. She had an abusive father. And she was crying out for help saying, 'I don't want to live this way.' We were able to minister to her, to help her see that with a relationship with Jesus you can find your way out of the deepest darkness. There are millions more like that girl we had the email from, who need to see that their sexualities are a gift from God, not a source of sorrow and problems in their lives."

The music industry, with its constant portrayal of sex as an appetite needing constant gratification with about as much pre-planning and sense of significance as a Big Mac lunch, has of course had a part to play in the decline of sexual morals. While gangsta rappers boastabout their "w'hos" and skimpily clad pop and R&B singers act the part, a group like Out Of Eden must, to the average mainstream record label, seem like they've beamed from another planet. Andrea speaks with passion, "Record companies don't understand us not wanting to show off our bodies - except to our husbands. They don't understand that God has called us to be role models. They don't understand that we want to sing about sexual purity. We live in a fallen world of course, a world which has shut God out. So in the mainstream pop and R&B there are great singers with great voices willing to go there, willing to do whatever the record companies demand and go where the money is. And they end up with all these people shaping them. Out Of Eden has been called by God to go a different way. We've been called to show people that they can find what they really, really want - love, peace and happiness, but they'll only find that in the arms of Jesus Christ. So we want to go out there and preach the Gospel."

One of the superlative tracks on 'Love, Peace & Happiness' is the soulful "What's Your Secret?" The idea for the song came from a question often asked of the album's co-producer Lisa Kimmey. Explains Andrea, "Lisa has a lot of friends out in LA trying to make it in the music industry, really locked in to pursuing success. They don't give a thought about God or anything like that. But then they see Lisa, and how relaxed and happy she is compared with their normal stressed out lives. And they ask her, 'What's your secret?' And of course that gives Lisa the chance to tell them about Jesus. She's had lots of opportunities to share her faith. Some of the people in LA call her Gospel Lisa!" 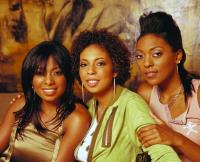 One of the most extraordinary tracks on their album is "Soldiers" with a hip-hop style groove, lyrics sung at such speed that one wonders whether they've swallowed The Bumper Book Of Tongue Twisters, a rap from John Reuben and a melody that suddenly, surreally spins off into Greig's "In The Hall Of The Mountain King"! Yet behind the anarchic groove of "Soldiers" is a serious spiritual intent. Andrea explains its genesis: "One day we were in the studio trying to record a song and none of us were happy with it. It just wasn't working. Well, I was pregnant at the time and I left the guys just throwing some ideas around. And they came up with this groove that was just 'out there'. Now we all go to a very strong charismatic church in Nashville which has a lot of powerful teaching about being sold out for Jesus. Well, the lyrics that came are almost a mission statement for the church! So anyway, they came over to my house with the song and at first I didn't like it, it was so different, so unlike anything else you hear. But the more I played it the more I got to like it. When we started to do it in concerts the audience went CRAZY over that song. We'd never had a song that affected people like 'Soldiers'."

Out Of Eden have been soldiers for Christ for a long time now. When the three Kimmey sisters from Richmond, Virginia, were signed by a fledgling production company, Gotee, formed by dc Talk's Toby McKeehan and record producer Joey Elwood in 1993, just about no group were doing female R&B gospel. Farming the tapes to what was to be the group's debut album, 'Lovin' The Day', around Nashville without success Gotee became a record label and 'Lovin' The Day' became a landmark album with its funky R&B grooves and delicate ethereal harmonies. Over the years more albums followed and slow but steady Christian radio began to embrace OOE to the hearts and playlists. Now their fifth album is finally out. "'Love, Peace & Happiness' was ready for release in November but it was decided to delay putting it out to give more time for a big marketing push," explains Andrea. "It's strange finishing an album then waiting months for its release. I put it away and didn't listen to it for four months! But now I'm excited about it and really looking forward to getting out and singing the songs before an audience."

This journalist wondered whether this mature and uplifting album might finally be the project that catapults the group into the upper reaches of the mainstream R&B and pop charts where they belong? "I don't know," admits Andrea. "After 10 years we haven't given up on crossing over. But that isn't our main goal anymore. If the Lord wants to open doors so that our music reaches even bigger audiences that's wonderful. But if we stay in a smaller marketplace that's wonderful too. When we started out the CCM people thought we were too gospel and the gospel people thought we were too pop. But gradually those weird divisions are being challenged. We really want to see those walls broken down. But what we're about is much more than making music and seeing it going into a marketplace. Our album is called 'Love, Peace & Happiness' and that's what everyone, black and white, Christian and non-Christian, is seeking. People aren't going to find those things in the world. People can turn on their TVs and see how horrible the world is. Violence and war. MTV getting raunchier. What people need to see is that to find the answers in this world what they really need is Jesus."

...Sister and i have been huge fans since 1997...Rare you find a gurl group w\swagger and virtuous and pure values and putting jesus center stage..#YouRock #God bless

i love u girls and i tak my courage from u u all make me believe that there are girls like us out there and that am not alone in my quest to being the true xtian young girl that i hope to be.wont mind hearing from u.love u girls

i love the spirit behind what you do. please remain planted in the cross and never compromise your vision for any earthly/temporal thing. your reward is with daddy God. God 's grace to you and your families. you guys are so beautiful.

these gurls are awesome luv their voices plzzzzzzzzz don't ever stop magnifying god's name and bringing out more albums.keep it up u r my favourite goepel group luv ya.i know i'm from a long way but i know every album.

i really cant believe that! are they breaking up or just taking a break

What can I say- these girls are awesome!! I have worked with them many times and built a friendship with them, and I can honestly say they live what they preach! They truly have hearts for God.