He's played to an empty hall and he's played to a packed stadium. Now PAUL DOUGLAS (and his band) have just released an album on a German secular label. Geoff Howlett found out when he talked to Paul. 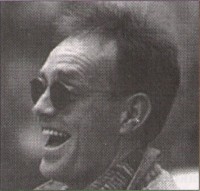 After years of private recordings and frustrated efforts in getting his snappy pop rock gospel into the shops, Nottingham-based Paul Douglas has a new CD in the record shops...in Germany! "The new album comes about from a change in the band line up," Paul explained. "There's now musicians from both the UK and from Germany. In February of '96 we were getting a little frustrated with the limits that were being placed on our music, in terms of who was listening to it. We felt that it was a good time to re-focus on what we were doing."

This led Paul and his songwriting partner Gunter Hauser to concentrate on music that unchurched people would be able to listen and instantly relate to. Halfway through the project, they decided to test the new sounds by visiting two German secular record companies. The first showed little interest, but the second had a very interesting reaction. Paul resumed, "They made several recommendations, told us to work on the songs a bit more and return when we'd finished. When we took the final recording back to Brother Records, they immediately thought it would sell in the mainstream market."

The new material has been well received at gigs in both this country and abroad. "People are saying that it is a much more interesting concept than we've played before," said Paul. "It's not a dance album, but there is a great feel to the songs in terms of rhythm and percussion. We want emphasis on the groove, the keyboard and more emotional vocals."

'Free Some Day' features 12 cleverly put together pop songs, including my personal favourite "Straight To The Top". Paul explained the story behind the song. "We wanted to expand on the 'first shall be last' theme," he said. "It's about acknowledging that there are down times in life and encouraging people in those times. We're saying in that, it's an opportunity to think positively, and that whoever humbles himself will be exalted. For us, that's a very important value. As a whole, the album reflects the questions that the general public have and we've tried to listen to our unchurched friends for the sort of spiritual things they talk about."

Having a co-writer who lives thousands of miles away can be a problem but modern technology holds the key. "We write in an interactive kind of way," Paul revealed, "by me developing the lyrics and Gunter working on the production. On occasions when we're not together, we send the information down the telephone line on a modem to our own systems and work on it that way."

The Paul Douglas Band look set to make their mark in 1997, but don't think that Paul has just appeared from nowhere: Paul's pedigree goes back over 10 years. "I did a music degree at Hull University (where he became a Christian) and it was during this time that I started writing creatively." Early inspirations such as Graham Kendrick and Adrian Snell made way to the likes of Martyn Joseph, with whom he toured in 1988. "They were great influences," Paul remembered.

Paul's debut cassette recording was released in 1988 and has been followed by four more private enterprises, featuring a number of musicians. The current band line up features Paul (vocals, keyboards and trombone), his wife Alison (flute and vocals), Gunter Hauser (keyboards, programming and vocals) and Derek Crehan (guitar and bass).

Gigs have been plentiful as have the memories. In 1995 the band visited the Channel Isles and awaited the audience's arrival. "No one came," Paul laughed. "Not even the promoter. Well, he did turn up half an hour late and played football with his son in the gym upstairs while we ran through a couple of numbers." Another memorable occasion was playing at the Olympic Stadium in Munich, for the closing ceremony of the Protestant Church Anniversary celebration. "There were 120,000 people there," Paul enthused, "and we were live on national television."

It all sounds like a dream come true, but Paul remembers the times when he's felt like giving it all up. "Times when the phone hasn't rung and concerts with virtually no one there, after travelling hundreds of miles to play. There's been other problems like on the way back from Prague, my van broke down. There was terrible confusion and chaos in terms of insurance, and I thought that I was going to be stranded and have to pick up a bill of hundreds of pounds for a vehicle that had just about had it. You feel very vulnerable in these situations. But what keeps me going is the things you hear from time to time." One of these occasions happened recently when Paul met up with someone for the first time in several years, who admitted that his own first steps in becoming a Christian were taken at a Paul Douglas concert. "That has got to be a good enough reason for keeping going," Paul claimed. "Despite the obstacles and problems that are thrown in the way, I still feel called to do this."

Paul Douglas is currently on the up, but tries to keep some kind of perspective. "I'm trying not to get too excited about things," Paul said, "because I've had my hopes built up in the past. The record company have said that they are thinking about producing a single, and that's encouraging, but until I see that single I'm not going to start jumping up and down and keeping my Friday nights clear for Top Of The Pops. I'm trying to keep myself 'on the ground'."

The opinions expressed in this article are not necessarily those held by Cross Rhythms. Any expressed views were accurate at the time of publishing but may or may not reflect the views of the individuals concerned at a later date.
About Geoff Howlett
Geoff Howlett lives in Hull, is a member of the rock band Giants Will Fall and co-ordinates a musicians prayer diary.