Toting violins both electric and acoustic, PAUL HEYMAN has more than one stylistic string to his bow. Jonathan Day reports. 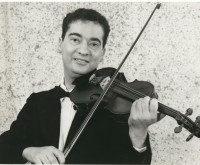 Don't know whether to blame Brian Eno or Steve Reich. So called composers, the ones who prefer manuscript to multitracks, have been producing "mood music" and "tone poems" since the sackbut and Serpent were high tech. Reel to reels of electronics have blurred the boundaries or serious and popular music until the distinction is meaningless. Somewhere in this creative melee between Phillip Glass' shimmering soundscapes and Bowie/Eno's album charting 'Heroes', "ambient music" was born. It is a difficult genre to define, taking anything from flute played over whale songs to abstract electronic beeps and bangs. Brian Eno, a progenitor of form, sees it as music not to listen to, a music which merely creates an atmosphere or "ambience".

Because of its usual lack of words or the ambivalence of its lyrics when they do occur, and because of the mystical and New Age leanings of many of its exponents, this music sits uneasily in the minds of many Christians. Nevertheless, there are many Christian performers of ambient music, and Greenbelt staged an ambient evening at their '91 fest. One of the performers, in the hip River venue, was violinist Paul Heyman. Paul has felt the sting of Christian criticism since the 1987 release of 'Vision'. "I received letters about the album," Paul told Cross Rhythms. "One said it sounded like it was demon inspired, another that by listening to it you could be led by evil spirits into an unreal fantasy world." Praise indeed.

Although hurt by these rebuffs Paul was not deterred. "My producer, Brian Spencer-Smith, helped me by reminding me that when we genuinely seeking to honour God, people will always misunderstand things, especially if they're different. My motive is good. I worship as I play. If people give the music a chance they can here that. I've seen people moved to tears."

So, of what is 'Vision' made? Against Grenville Harding's convoluted keyboards, Paul's electric violin has the classic, strangely synthetic sound of the instrument. Somewhere between a rack processed electric guitar and a stylophone, this banshee wail swoops and stutters around the backing. Paul's mellow acoustic violin provides counterpoint, with the instrument's gorgeous natural tone. Many of the pieces are perhaps too busy and, by Brian Eno's definition, interesting, to be classic ambient. There are slower, more mellow sounds however.

As if to confirm the idea of worship as he plays, Paul's latest album 'Violin In The Vineyard' is a collection of worship songs from the Vineyard Fellowship. In the light of this, is Paul deserting ambience? If so, is it the misunderstanding and criticism which have driven him away? "Ambient music is great for listening and relaxing to, but it's not always good to perform. I'm interested in rock music, exciting music. I've always wanted to contribute to many forms of music. To leave a mark. The new album is still fairly ambient, even so, but the focus is very clear. The intent of the writers is to worship and that shapes the music."

The album, soon to be released on Anchor Recordings, features Paul on violin and Pam Taylor on guitar and keyboards. Using the multitrack recorder, they stacked violin on violin to achieve the sound. There are no vocals and in true ambient style, the tracks are long. "More Love, More Power" runs to 10 minutes.

His current projects, which include 'Violin In The Land', a Messianic Jewish worship album currently in preparation, and a worship and ministry band, bear witness to his wide ranging taste. This is, interestingly, true of several Christians involved in the genre; Mark Catley and Geoff Mann come to mind. Throughout this stylistic diversity run two threads, a desire to show what an electric violin can do and a desire for quality. "Young people hear the quality all the time in the media," said Paul. "We need to produce music of a high quality in order to reach their ears. This is hard to achieve because of the lack of resources. The Church needs to respond to artists and their work with a much higher level of support."

The electric violin is an unusual instrument. Paul's journey to it is an interesting one. "I began violin at the age of seven. I was never particularly interested in music. It was just something which I seemed to be good at doing. I was a lonely child for three years when I was quite young. I felt there was no one in my life to talk to. I had no friends. It was like living in hell." College was no picnic for Paul either. "Having to do classical music stopped me from being committed to music. I was more interested in drama! I wasn't very popular. In fact, I auditioned for "Dream Academy" (a mildly successful band whose 'Life In A Northern Town' was a hit single) and all but had the job until someone remembered me from college where I was a kind of annoying Christian. After college, I realised that I was a pop musician at heart." Paul set out to have a pickup fitted to his violin. "Several violin craftsmen refused to fit the pick up for me, saying 'You can't do that to a lovely violin.' Eventually I found someone who would make the modification once I'd crossed his palm with silver!"

If Paul's early life had been hard, much more was still to come. He recorded his first album 'Flying By Night' in 1986 as he developed an acute kidney disorder. Recording sessions on this and the subsequent 'Vision' were punctuated by hospital visits for dialysis. A kidney transplant in 1988 is at the moment not working too well.

His past has left him a serious man, but he has learned valuable lessons also. "I was in hospital once and I had a gig coming up. I was desperate to get the gig. I missed the first two days, but left the hospital in time to play the last two. I actually played with food poisoning. Music isn't everything, I learned that. You can only do your best, if you miss a gig, even though you tried your best, well so be it. I've worked quite a lot with Sal Solo, including main stage at last year's Cross Rhythms Festival, and he's been really helpful. He's a man who's been famous, been at the top of the tree and what he wants most is to serve God. Music isn't everything; success isn't everything."

Touring is out for Paul, his day by day work focuses around teaching violin and performing in restaurants, a mixed spiced by his various involvements. With his 'Vision' album, re-issued by Network Information, and an agency agreement, Paul's future is an uncertain one. His kidneys are currently working at 15 per cent efficiency and the necessary tablets cause memory loss. His final comment: "I was going to say something profound, but I've forgotten." Pray for this man.

The opinions expressed in this article are not necessarily those held by Cross Rhythms. Any expressed views were accurate at the time of publishing but may or may not reflect the views of the individuals concerned at a later date.
About Jonathan Day
Jonathan Day lives in the Midlands and is a full time singer/songwriter.

I used to go to church with Paul in the late 80s and then lost touch with him for a few years until Covenant and Israel's Passion came out, when I managed to speak to him about coming to play at our church. Sadly that didn't happen and I lost touch again.

I see from this article that he has made another CD - Violin In The Vineyard - but can't find this anywhere. Was it actually released? In view of his kidney problems, is Paul still with us? I'd love to get in contact with him again.

Does anyone know how to get in contact with Paul Heyman? I'd like to donate to him.