Acknowledged internationally as a master of the electric violin, PAUL HEYMAN has a new album out. Dimitri Tsouris caught up with him. 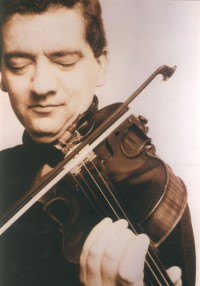 Although having trained as a classical violinist, Paul Heyman is nowadays better known for his skills on the electric violin, specialising in Jewish and gospel music reflecting his mixed Jewish Maltese roots. Paul has toured and recorded with such people as Helen Shapiro and Sal Solo and released his first non-independent solo album 'Israel's Passion' in May 1996. 'Covenant' is Paul's second instrumental album released through ICC and again features some of Paul's breathtaking improvisational skills while retaining the distinctive Jewish influence of his first album.

Dimitri: Paul, how did you first begin on your journey as a musician?
Paul: "Well, I began to play the violin with worship groups and in my local church, gradually I became familiar with different styles of music playing on the electric violin. From there I toured with other musicians and finally in my own right, where last May I performed at Israel's Jubilee, the five day American celebration of the 50th anniversary of the State of Israel, in Orlando, Florida, playing to crowds of up to 16,000 people each day. The event was attended by many top Israeli and US government officials and broadcast via satellite across the US and Canada. A major highlight of the celebration was when I accompanied country star Glenn Campbell's belting Spanish guitar rendition of 'Hava Nagila' on my electric violin. Earlier in March of last year I visited the former USSR state Belarus to perform at the Cultural Palace in Minsk to an audience of over 13,000 including holocaust survivors and victims of the Chernobyl disaster."

Dimitri: I know that you have worked with Sal Solo and Helen Shapiro. How did that come about?
Paul: "Sal Solo heard an earlier tape I had recorded. He asked if I would like to audition in order to go on tour with him, playing in his backing band. Helen also hard my earlier tape and after my second kidney transplant asked me to tour with her, playing with her worship group."

Dimitri: What's the inspiration behind your new album 'Covenant' and who worked on it with you?
Paul: "My latest album is intended o be a musical celebration of God's character and deeds and to reflect the time of blessing that God has given me after many years of severe ill health. 1 also wanted to explore some new areas for the electric violin whilst retaining the passionate emotion of the instrument. And the fans kept asking for another album! Many tell me they are still playing 'Israel's Passion' regularly and it's often featured on UCB and Premier Radio even though it's been three years since the release. It's become a timeless album. It seems too that the interest in Messianic music is on the increase and that people are being ministered to through my music. Following the success of 'Israel's Passion', I wanted to work with the same musicians with people like arranger Dave Cooke, woodwind player par excellence Mike Haughton and bassist Mark Prentice. The only new member of the team is electric guitarist Ian 'Skip' Price who contributed his own inimitable counterparts to my violin solos."

Dimitri: Is there some significance behind the title track of your new album?
Paul: "'Covenant' is inspired by God's supreme faithfulness to his people, to us, and it's the first song that Jan my wife and 1 have written together. It's a beautifully dramatic track with a driving dance rhythm combining the awesomeness of God with the joy that he cares so much for us. The lyrics describe the basic covenant promises of the Hebrew Bible and are included on the cover so that you can meditate on some of the examples of God's faithfulness."

Dimitri: I understand that God has really done a wonderful miracle of healing in your life, bringing you through a really tough time. Would you just tell us a little about that?
Paul: "At the age of 25 I suffered a complete renal failure and spent the next 13years alternating between dialysis and kidney transplants. Although officially disabled having developed severe bone problems as a result of my kidney failure, I now have a successful kidney transplant - making a total of four kidneys -two transplants plus two of my own. And through it all, God has allowed me to tour the world playing the violin. Out of the musical talent that God has given me and the experiences of being seriously ill for a long period of time, a ministry has grown up which has become as important to me as the music. I have found that somehow the combination of my music and sharing my personal testimony has encouraged many people who are going through tough situations and has brought them to a renewed walk with the Lord."

Dimitri: Will you be touring with your new album this year?
Paul: "There are discussions for performances in Europe and the US later this year. My UK tour starts in March with Ireland, Easter People, Hearts On Fire Festival and other venues. For the tour, I am very excited too about working with a very talented dancer and choreographer Vivienne Tsouris who is using contemporary and Davidic (Israeli) dance performance to interpret some of the deeper meanings of my music."

Dimitri: Still on the subject of training in music, what is your view with regard to professionalism as a performer and the general CCM scene?
Paul: "I believe it honours God when we give our best. The best performers are those who have had training but who also have an anointing with their work. You may have very good quality musicianship but where there is no anointing, it loses that extra piece of life, which really goes on to touch others. For me, I don't play my music just for the sake of playing, but play because there is a real sense of fulfilling my role with my given talents from God, that I may please him and those that hear my music."
Dimitri Tsouris is a well-known painter whose work recently toured cathedrals in the south west. He is also the organiser of the Arts programme for the Cross Rhythms Festival.