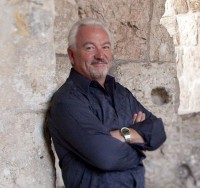 Music is the universal language. It's an old saying that's being echoed and amplified around the world in the extraordinary musical ministry of Paul Wilbur. For over 40 years, in thousands of concerts and recording projects that have reached millions across the planet, Paul's distinctive songs of praise and worship always get to the heart of the matter about matters of the heart. Whether he's leading worship before crowds of thousands in the Middle East, singing to packed soccer stadia throughout Latin America, or bringing his anointed Messianic message directly to the people of Israel, Paul speaks a language of melody and meaning that reaches far beyond cultural, social and political borders to touch people directly with the love of God.

It's this worldwide reach that has given a dynamic new dimension with 'Your Great Name', the latest Integrity Music release from Paul. An exciting departure for this inspired and experienced artist, the 12 selections of 'Your Great Name' open new vistas for Paul's Messianic ministry, with its rich heritage of Jewish worship, on his first studio release in nearly 20 years. Produced by Nashville veteran Dan Needham and over a year in the making, 'Your Great Name' highlights material written by Paul and a sterling cast of collaborators that includes such notable names as Steve Merkel, Michael Farron, Don Poythress and Michael Neale, co-writer of the Dove Award-winning title track. While still firmly grounded in the song styling that has made Paul an international ambassador for Messianic worship, 'Your Great Name' adds a fresh contemporary element to the musical mix, thanks in part to the support of top-notch studio musicians and a state of the art recording process.

But at the heart of 'Your Great Name' is an inspiration that, as Paul explains, came directly from God. "About two years ago I heard a word from the Lord. He told me simply, 'If you have a need, I have a name.' That became the theme of this album, with each song highlighting one of the covenant names of God revealed to the Jewish people. While some, like El Shaddai, El Elyon, Adonai and Elohim are very familiar, others are less well known. 'Your Great Name' is my way of celebrating all the abundant attributes of the God of Abraham, Isaac and Jacob."

The result is destined to become a modern worship classic. With such standout new tracks as "Who Is Like You", "Song Of The Beautiful Bride" and "Glory Come Down", the album also features new versions of church favorites like "Great I Am". And it includes the ancient Hebrew hymn "Ani Ma'amin" and a majestic rendition of the abovementioned title track, originally recorded by Dove Award winner Natalie Grant. Simply put, 'Your Great Name' finds Paul Wilbur doing what he does best - exalting the name of God to all the nations.

It's a calling that came early to this gifted musician and worship leader. Paul's musical history reaches back to the mid-'70s when he was a young college student studying to be an opera singer and cantor before a born again experience took him in a radical new direction. He started Harvest, an early Jesus Movement band, and subsequently formed Israel's Hope, dedicated to bringing the message of the Gospel back to the Jewish people. That ministry would quickly come to define his life and music. In 1990, Paul signed to Integrity Music and released 'Up To Zion', a groundbreaking album in the Messianic Jewish movement. It was followed by a string of acclaimed releases, including 'Shalom Jerusalem' and 'Jerusalem Arise' and a virtually non-stop international touring schedule. His concert ministry would in time take him to every continent on the globe, playing before huge audiences in far-flung locations ranging from South Africa to Singapore, Kuwait to Honduras, France to the Philippines and beyond. And he would go on to perform in virtually every Spanish speaking country on the planet, including recent concerts in Cuba.

Along the way he came to realise that God had called him and his team to a truly global mission field. "We had to take a cross-cultural, multi-lingual approach almost from the beginning," he explains. "The heart of worship is communication, from our hearts to God. You can't expect people to reach out to God in a language they can't understand. Our goal quickly became to carry the music, message and ministry of the Kingdom to the nations in their own language."

To facilitate that aim, Paul would eventually perform and record in a total of six different languages: English, Spanish, Portuguese, German, Hebrew and, most recently, French. New releases, including 2005's 'The Watchman', 2008's 'Paul Wilbur Live' and 2010's acclaimed 'Desert Rain', were often recorded in a variety of languages. A busy touring schedule, which takes Paul and his group around the globe upward of 250 days a year, likewise highlights concerts performed in indigenous languages. A Spanish version of 'Your Great Name' is, in fact, scheduled to be recorded live in Mexico in early 2013.

Given his demanding schedule, taking time to create 'Your Great Name' proved daunting. "We had to grab opportunities when we could," Paul explains, "but we felt the message of these songs was so important that we had to make this album. At first I missed the excitement that comes with a live recording, but I learned to appreciate the chance to shape and mold this material, to introduce new musical elements even as we were able to stay true to our original vision of Messianic worship. But what I'm most excited about is the opportunity to bring these songs and their message to the nations in a language they can understand."

Paul concludes, "God has taken us to so many places, before so many people who have so many challenges in their lives. He wants them to know the same thing he told me: He has a name to meet every need. That's something the whole world needs to hear." And on 'Your Great Name', Paul Wilbur uses the universal language of music to proclaim that message loud and clear.

The opinions expressed in this article are not necessarily those held by Cross Rhythms. Any expressed views were accurate at the time of publishing but may or may not reflect the views of the individuals concerned at a later date.
About Davin Seay

Davin Seay is a renowned American author and journalist who has co-written such books as San Francisco Nights: The Psychedilc Music Trip and Stairway To Heaven: The Spiritual Roots Of Rock And Roll.

I am so looking forward to your concert this Sunday,
July 28th at Temple in Roswell, Georgia. It will be marvelous. Your worship music transports me to the very throne of God. Many worship leaders work very hard to have those who listen to their music desire this result but they fail because they do not lead worship they perform worship. You lead me to the throne.