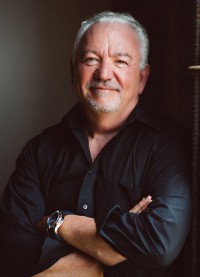 Israel seems the perfect place to talk to the 56 year old leading exponent of Messianic worship music Paul Wilbur. On a recent trip to the Holy Land he was quizzed by Paul Calvert.

Paul Calvert: Why are you here in Israel, Paul?

Paul Wilbur: We did our first tour with our ministry this year. Since 1983 I have been supporting everybody else's ministry and touring, we brought 100 people to let them see what Israel is like and then we stayed on for this FIRM conference, Fellowship of Israel Related Ministries which is introducing people to the best way to approach Israel. It's been fantastic, there are so many great people here, Daniel Kolenda, Christ For All Nations and on and on and on, a long list. Wayne Hilsden is a Pastor here, since 1982 I believe, and he is the one who has put this FIRM together - thousands from all over the world - it's just been a great, great experience.

Paul Calvert: What have you been speaking about at the conference?

Paul Wilbur: They gave me a slot here this morning, but these are ministries from all over the world that are introducing themselves to others or actually ministering to the people. This morning I felt impressed to bring a fresh prophetic word, something that the Lord just dropped into my heart for these folks about being the sword of the Lord in this hour, the two edges. It seemed to have a good impact. We are more than a music ministry, the music really is the open door for evangelism, for teaching for encouragement, for training, so that is the direction. We go to the Jew first and also to the nations. We love the UK by the way, we are just planning right now to get to Manchester and other cities where you have had a little bit of challenge there.

Paul Calvert: You play concerts all around the world. But is Israel unique?

Paul Wilbur: Israel has always been unique because it is a God-ordained nation. He started with a friend called Abraham and then you get the whole dispensation off to Egypt and becoming slaves for 400 years, called out, wandering in the dessert, displacing the Canaanites that were here. Israel is a nation that was created by God and this land he calls his own we call it the Holy Land or some people call it the land of the Jews .But this is what God says he calls his own, this little strip of land on the Mediterranean that's about - for us we compare it to the size of New Jersey, one of the colonies as you might say. Jerusalem is the capital, the city where the covenants have been established, where Jesus Yeshua will return to set up his thrown, reign and rule. All the nations will come up for the feast of tabernacles, we could go on for hours. . . Israel is unique in every way from the land to the people to the God of Israel and so for those who come they get an experience of the culture, the people and the covenants and everything from the good the bad and the ugly and there is a little bit of ugly here as well.

Paul Wilbur: I'd like to think so. This has been our passion and our calling for the last 40 years. We heard a group last night called Makeddam and Wayne Hilsden's son Jamie, they're not Jewish but he's writing in Hebrew, its great music, really interesting, so I would like to think so. But I still find we are pretty unique on the globe as we travel today around 75 nations, I don't hear yet a lot of new voices and new faces but I believe they are coming, they're on the way.

Paul Calvert: So have you been pioneering Messianic music?

Paul Wilbur: I would say so, at my age. Joel Chernoff and his group Lamb back in the '70s, the late '70s, I came along '77-'78 , I had a group Israel's Hope and we are now the fathers or maybe even the grandfathers of this. Jews For Jesus have their impact, they are not writers as much, Marty Getz is a writer, Barry Seigal who lives here in the land; but we are all about the same age and interestingly enough a lot of us came from Cleveland, Ohio which is very strange - a pretty good sized Jewish community in Cleveland. But yeah, I would love to see a lot more faces and voices coming along here; we've been pioneering, we've been rowing this boat for a generation, 40 years is a generation in the Bible. Yeah, I'm a whole generation older with the rest of those guys.

Paul Calvert: As you travel is the understanding of Israel growing in the church?

Paul Wilbur: We have one huge problem in the Church called replacement theology. It's bad teaching. It says basically the Church has replaced Israel, all the promises of God were conditional, which he directly says in the word are not conditional. His love for Israel has never changed, his covenants are eternal, his promises are good, he is in the process of fulfilling them right under our noses. And yet at least half of the Church says, "No no no, every time you see Israel in the Scriptures it's really talking about us the Church, wink wink wink" which if you try and follow that theologically makes absolutely no sense, so that is our greatest challenge. At the same time there is a passion growing for Romans 11 - all Israel will be saved. There is a new passion for what you might call Jewish roots or Hebrew roots, back to the foundations, and so we have the conflict of these two strong moves in the Church. So while we may be misunderstood on one hand we are embraced on the other, so it's a very interesting walk as a Messianic believer. I admit you get some fruit, nuts and flakes along the way and they tend to be louder than the rest of the box of cereal but it's okay because the truth always triumphs over the craziness.

Paul Calvert: Is Messianic music based around Scripture?

Indeed,it is a struggle coming out of Christianity to return to Biblical Judaism as Rabbi Yeshua taught. My husband & I visit churches to teach the Torah and minister in songs: www.martyanddevoracohen.com