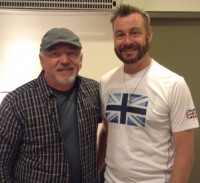 Paul Wilbur: Oh yeah, for me it is. When there was the emergence of Christian music back in the 70's with the Jesus movement people like Keith Green, 2nd Chapter Of Acts and Sandi Patti, I mean it's a long, long list, it was Scripture-based. Then it began to be about experiences and along with that came what we call contemporary Christian music where Christian artists were trying to cross over so they [sang about] not so much Scripture but social issues or whatever. It's gone beyond that as well, but we are praise and worship orientated so obviously all of our music is Scripture-based because worship is supposed to be directed to a throne, to a king and that has been our passion our motivation.

Paul Calvert: Now you're not Jewish but you play Messianic music. How did you get involved and why?

Paul Wilbur: I am Jewish, Jewish father and Baptist mother, very proudly Baptist, and so in the early years we were in and out of different churches from time to time. When I went to college I joined a synagogue then I wanted to be a conductor and an opera singer but after I got born again my Jewish genes, my Levis if you will, my Levi Strauss, just began to holler at me and I couldn't find a way into Wranglers - it was Levis for me. There were many times in my life when I asked the Lord, give me a different assignment, because at times it was just too strange, because the very people that we want to reach with the message of the Gospel look at us very differently and some of the Church as well - "Are you a judaiser now, what are you?" It's a very narrow path. If the Gospel is a narrow path, the Messianic proclamation of the Gospel is like the blade of a knife. But I have come to the place where I am really comfortable here being a voice not only in the music or the worship but in the preaching and in the teaching and in the evangelism and I am comfortable in my skin after all these years. It's a natural thing for me. The very first group I was in [along with a couple of Gentile guys] was called Harvest and we wrote all of our own music. It was very popular and we had great success early on. We were only a group for three months and Benson Records in Nashville signed us and we went on from there for five years till I left. Every time I wrote a song although I had a Masters degree in music, I could craft a song in any key with the proper this and that but they always came out sounding Jewish and the guys would look at me and say, "You know you got a Masters, can't you write in major keys?" I said, "I can't help it." I spent a lot of my meditation time in the Psalms - you can preach the Gospel out of the Psalms very easily. I love the poetry of it and I love the encouragement of it, I love the up and down of David; so I spent a lot of time in the Psalms and [the songs] would come out (singing) "It is food to praise the Lord la la lai la la lai," on and on and on so I just can't help it, it's my DNA.

Paul Wilbur: It has. At the age of nine my dad got me a very inexpensive guitar from Sears & Robuck, I think he paid $20 for it which today you can't even feed a family of four at McDonalds for that. And he got me some lessons and it's been a part of my anatomy ever since nine years old so however old I am -9 is how long I have been playing that thing.

Paul Calvert: That was a great investment then?

Paul Wilbur: It was. He wasn't very happy when I became a believer, he wanted me to have counselling, he was very concerned that I had joined a cult but the music part he was always very pleased with except when I started writing Messianic music. He did come and visit our Messianic synagogue in Maryland with Sid Roth and Dan Juster and some of the very well-known names at the time and still today; he had a bit of a difficult time with it but it was all his fault! He taught me the guitar, he bought it for me, got me lessons and so I always told him, "You know, this is all your fault!" Eventually he got to be very proud, he would come to my concerts, he committed his life to the Lord, got baptised, joined a choir and then he told everybody, "I'm Paul's dad." It was fun. The last 25 years of his life he had a very big transformation and passed on from this life just a couple of years ago, almost made 90 years old. It was really his fault that I went the music direction; he wanted to be a musician, played violin when he was young growing up. His mother was orthodox Jewish and in a home like that if your father's a carpenter you're going to be a carpenter. Just like Jesus. His dad was a chemist so he went into chemistry but he made a decision early on when I was born he wouldn't force me to anything and said, "Whatever you want to do," paid my way through under-graduate school, was very supportive. He's still one of my heroes today. Great guy.

Paul Calvert: Have you got any new music coming out?

Paul Wilbur: We do, we just released two instrumental projects actually they are free of charge. If you log onto www.paulwilbur.com you can download our instrumental projects. About this time last year we released a new project called 'Forever Good' and we are making plans now to come back to Israel next year to do a very big production like 'Shalom Jerusalem' from 1995.

Paul Calvert: Do you think God is still speaking to Israel today?

Paul Wilbur: When you say Israel, does he speak to Orthodox Jews? Does he speak to the secular Israeli leadership? The government? I believe he is very involved in the life of Israel because Israel is a not only the apple of his eye but it's also a signpost. One day it will be the chief among the nations again and I believe God has a very significant plan for Israel and his promises he will keep. So yes, he's directing, he's leading. It's tough to lead people who aren't listening. Although Orthodox Jews pray three times a day - yes, it's prescribed prayer and yes they read from books but God can use a donkey so if he can use a donkey he can certainly use people who call out to him in righteousness or in holiness in earnest need.

Paul Calvert: Finally what is your prayer for this nation, for this land?

Paul Wilbur: For the longest time our prayer has been the same as the apostle Paul that for this nation, this people that they would know their king. It's great that in 1948 Israel arose out of the ashes of the holocaust; it's great that we are celebrating this year the 50th anniversary of the reunification of the city of David, the city of Jerusalem, but our hearts cry to God is that Israel would be saved. We have that promise in Romans 11 that one day all Israel will be saved. What will that look like? When will that happen? We don't know but we know that it will happen, that it will be a reality, that one day all the nations will come here to worship and so we pray for the peace of Jerusalem. We are actively involved in sharing the Gospel here through music and teaching and preaching, even in the streets whether they want to hear it or not. So that is our prayer, that we would see a speedy return of the Lord. Of course in the fullness of time he knows when that will be, but the salvation of our people, that they would know Yeshua Jesus their Messiah and the peace and the joy and the life that that brings because Israel is supposed to be the priesthood of all the nations. So that's our prayer.

Paul Calvert: What is your website address for people who would like to know more about your ministry and your work?

Paul Wilbur: My name, www.paulwilbur.com. We've got books and CDs and DVDs and other people's materiel that we really believe are valuable and that people need to have as a part of their tool chest. We are on twitter and Facebook, we have got quite a following on Facebook. A lot of our videos and live concerts are available on Youtube by my name as well so you could spend the rest of your life seeing and reading all that stuff - I don't recommend it but it is there.

Indeed,it is a struggle coming out of Christianity to return to Biblical Judaism as Rabbi Yeshua taught. My husband & I visit churches to teach the Torah and minister in songs: www.martyanddevoracohen.com