People!: The '60s rock hitmakers with the Larry Norman connection

Tony Cummings spoke to guitarist and founder of '60s band PEOPLE!, Geoff Levin, in the wake of the publication of Why Should The Devil Have All The Good Music?: Larry Norman And The Perils Of Christian Rock. 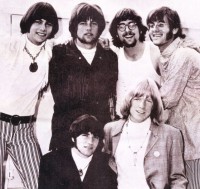 The bare facts about the California-based band People! are known to every long-time follower of Christian rock as the '60s band that launched the music career of The Father Of Christian Rock, Larry Norman.

People! were signed to Hollywood's Capitol Records (the label that made countless millions with the Beatles and repeated the trick with The Beach Boys) in 1966. After two unsuccessful singles, the band, consisting of singers Larry Norman and Gene Mason, along with guitarist and founder Geoff Levin, his brother Robb Levin on bass, Albert Ribisi on organ and Denny Fridkin on drums, had a hit with the single "I Love You" - a cover of a flipside by Britain's The Zombies. The single made number 14 in the US charts and went on to become a number one hit in Japan, Italy and Israel, with People! going on to play gigs alongside the top names in rock and pop. But People!'s debut album didn't sell. And there were no more hits for the band, who parted company with Larry shortly after most of the band embraced the Scientology cult.

These are the facts about People!'s co-lead singer Larry Norman that the hardcore Norman anoraks dotted around the world could have more-or-less recited to you. Now, with the book Why Should The Devil Have All The Good Music?: Larry Norman And The Perils Of Christian Rock by Gregory Alan Thornbury published, more detail should have emerged about Larry's time with People! According to the band's founder, that hasn't happened. In a phone conversation with Geoff Levin, we spoke about that book and the band.

Tony: So how did Larry come to join People!?

Geoff: It really came about through Michael Hunter, Michael Harrington or Captain Mikey, those were all his names. Captain Mikey was the head DJ and programme director at KLIV. I was just starting to teach guitar because I was going to school and had to pay my way and make my own money. So I was teaching at a place called Moyer Music right next to the college and they did a promotion with KLIV. Part of that promotion was to give Michael Hunter guitar lessons so I was elected to give him the lessons. That was a pretty big deal for me that I was now teaching the top rock DJ. He didn't really want to learn guitar but it was part of the promotion. But what did happen was that we hit it off pretty well. He liked me, for some reason. I told him about my band and he said, 'That's cool, I'm interested.' And he got us a gig before he even saw us, which is dangerous by the way. So I guess off of my character, he thought this was going to be a good band.

Well, he did come to see us at some other venue because we were starting to play around San Jose, and I got the word the next day: get rid of your lead singer. That was David Anderson. David was a folk musician; he wasn't really geared up to front the kind of band that Michael wanted to work with. Michael had a plan and David was not part of it. So I think we were set to open for The Dave Clarke Five at the San Jose civic auditorium, pretty big deal for us. Now we have no lead singer, he said, 'You've got two weeks to get new lead singers,' so this is where I was scrambling. I think everyone was scrambling. I found out about Gene Mason and I went over to see him. And Larry was living at Gene's.

So I was talking to Gene, I said, 'Let's hear something,' and he just made the suggestion, 'Well just take a listen to what Larry and I do.' They'd already been working together and I think at the time Larry was living in Gene's garage. So they sat down and did some of their stuff that they did as a duo and I said, 'You're both hired, if you want the job.' I didn't have any reservation about knowing what I wanted. They were pretty much it. I could see the potential immediately: the dark, the light, the lyric baritone and the tenor. That was it, it was that fast, we had to rehearse like mad for that gig and Michael was happy. At that point he said, 'I'm going to manage you,' and honestly he's the one who opened the doors for so many things for us. He was like the pre-A&R person.

Those were the days that the record companies did develop the artists and worked with them. In a way, he was decades ahead of the way it is now where the managers are the ones who do the A&R work. The record companies are just distributors nowadays; they do nothing more than that and the management companies develop the artists and that was what Michael was doing. He was very specific with us; he gave us a lot of latitude, at the same time he just wanted us to work and to get really tight as a band. We had about two years to do that before we got a record deal, through Michael.

Tony: I understand you're very unhappy about Gregory Alan Thornbury's Why Should The Devil Have All The Good Music book.

Geoff: Yes, very unhappy. I spoke with someone at Random House [the book's publisher] regarding the gross inaccuracies of that chapter about People! It's gross enough that there could be a lawsuit. That's not Larry's fault, that's the fault of this guy who wrote it and didn't interview anybody in the band. It's unprofessional. Reading that chapter in the book, you can't really get a good sense of Larry's relationship with us. What I can say, though, is that Larry was very enigmatic when he was in the group. We didn't know anything about him; he didn't proselytize to us all. I had no idea he was a devout Christian. I think I knew he was a Christian but he didn't give us any indication of how deep his faith was, how important it was to him. He was a good member as a professional, as a singer; he did his work and he pretty much kept to himself. We weren't hippies; we weren't heavy-duty drug takers. One of them I had trouble with and that was the keyboard player, Albert. I had a strict rule that no drugs at all when we were working, any time we were working. If we were rehearsing or if we were on stage: nothing. I came down hard on people who would do that. They didn't do that more than once; I was pretty strict about it. We had no idea that Larry was a devout Christian, we didn't hear it in his songs, he didn't in any way say these are songs about my faith or songs that I'm inspired by and he was a good songwriter. We didn't even start working with original songs until we realised we had to because we were now getting a record deal.

Tony: What timeframe are we talking about? How long was Larry with you?

Tony: But it was only when you'd landed the record deal and there was a need for a whole batch of original songs, it was then that the direction of some of those lyrics in some of those songs, the penny began to drop that you were dealing with a committed Christian, is that true to say?

Geoff: No, not true. I didn't have any idea until much later, until I heard Larry's Christian songs on the radio that he had such a zealous faith. None of us really knew that. Gene may have known but he didn't say anything. Gene and Larry were professional; they came to work, they came to the rehearsals, which were in Albert's garage. Albert's parents were super supportive, amazing people. When we kicked Larry out of the band it had nothing to do with anything but the fact we'd turned into Scientology zealots and we started applying things that we really didn't know what we were doing. It was more about Larry's personality, what we perceived and our youth, our stupidity and inability to work with various types of personalities and understand them. I had maybe three classes in psychology; I was clueless. As the leader of the group I should've jumped into some better textbooks and writers about this whole psychological, self-help thing but I didn't know that, so I was a perfect candidate for a cult.

So much rubbish being said here. Geoff, can't you get your stories straight? My reply is too long to fit in this box, but if you'd like to see a rebuttal with actual proof instead of conjecture, check this page at the Larry Norman web site:

Larry Norman did not tell the truth about a lot of things. I think a lot of people owe the guy who did that documentary an apology. He nailed it.

Good little interview. I appreciate this point of view.

I feel like Thornbury's book could have had the subtitle, "As told by access to Larry Norman's personal archives." The members of People aren't the only people in the book who didn't get interviews. It simply isn't a journalistic book; it's more like a devotional/hagiography.

I hope more people are willing to tell their story if they feel misrepresented by the book.

For more on People! visit the People! artist profile