Perry LaHaie: The musicianary with the "Ahead" radio hit 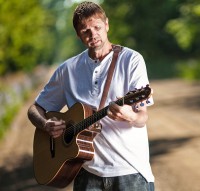 A hot new track on the Cross Rhythms radio playlist is "Ahead", an infectious, upbeat prayer-in-song by a Michigan-based singer/songwriter called Perry LaHaie. Perry is a seasoned veteran of music ministry who has clocked up seven albums of self-penned songs, is an experienced broadcaster with years of radio under his belt and a globe-trotting musicianary who has shared his music in Russia in 1993, in Turkey in 1999 and 2011, in Mexico in 2001, in Thailand in 2002 and 2010 and in Belgium in 2005. He is also the morning show host at 89.3 Moody Radio West Michigan from 6 to 9 AM weekdays. Considering all this tireless activity, I was pleased that this warm and friendly gospel communicator had time to talk to Cross Rhythms about his life and vision.

I began by asking Perry if he grew up in a musical home. "Very much so. My mom and dad are not professional singers but they were always singing around the house as I grew up, harmonising with each other. The first gift I realised God had given me is music. I went up to my dad and said, 'I want to learn to play guitar.' I was not even 10 years old, so it was there at a very early age."

Perry shared some more about his early years. "I grew up in northern Michigan, which is very rural. I like to say I'm from the north woods of Michigan and grew up in a very small town. When my mother and father were about 30 years old they had a very powerful spiritual awakening to Jesus and to the Gospel. I saw that change in their lives and I wanted what they had. At about age 10 I took hold of Jesus for the first time."

As he entered his teens though he found that living a life worthy of the name Christian was a tough call. He said, "As a teenager I really struggled with temptation. I was a complete and utter failure morally. As a follower of Jesus, I had a lot of shame in my life: I had a lot of secret sins I would never share with anybody. But the Lord got a hold of my life, showing me he loved me even though I was in a sinful lifestyle - particularly when I was a senior in high school. I was playing basketball and injured my ankle severely; my friends carried me home and laid me on the couch. I asked my mom to pray for me and Jesus just took away the pain. I was amazed. I thought I had to be a good person to get God to love me - I still had that thought - yet here he was showing me his love at my worst. So I like to say my short story is: Jesus found me at my worst, he embraced me, said, 'I love you; follow me,' and I've been following him since. There continues to be this progression of becoming more like Jesus. I'm in the great sinners' club and yet Jesus is in me and he's changing me. This journey is a process: I haven't arrived, but I'm pursuing that."

After leaving college Perry plunged into vocational ministry doing music, radio, worship leading and evangelism. Said Perry, "I believe that every follower of Jesus is in the ministry. I jumped in because I had experienced the grace of God, and I just had a passion to share that with others. I still do: he continues to evangelise my heart, and I just want to share that." In 1988 the singer/songwriter recorded his first EP 'Thy Kingdom Come'. Further recordings followed: 'Grace And Mission' (1992), 'A Hope And A Future' (1996) and 'Life Messages' (2000). Perry became the host of the afternoon show at radio station 99 Seven, Family Life Radio, Midland, Michigan. Then in 2007 Perry began working with Frontiers, an international mission organisation that reaches out to Muslims. Explained LaHaie, "I joined Frontiers as what we call a mobiliser - someone who shares the vision of reaching Muslims. I use radio and I use music to encourage God's people to know that there is a massive amount of people in the Muslim world - over one billion - who need to hear the Gospel. My role is to encourage fellow believers to get involved in reaching Muslims all round the world." 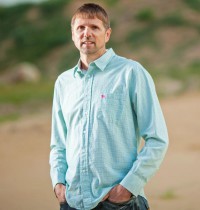 I asked Perry whether, with all the violence now taking place, he thought it was harder or easier to bring the message of Jesus to the Islamic world? He responded, "I think that we're seeing more of an openness to Jesus among Muslims that we've never seen before. In particular in Iraq and Syria with ISIS, peace-loving Muslims are seeing the more radical elements of their faith, and it's a complete turn-off. The refugees coming into Jordan are open to Jesus; many are coming to faith. I'm hearing on the ground in the Middle East that Muslims are begging to know more about Jesus. God is using these terrible things to bring Muslims to himself."

Continued Perry, "I have a team of supporters with Frontiers, and they help provide funds for the recordings I do. I started recording a long time ago and it's been a lot of self-funding; but also family, friends, people who like my music help support it. I am an independent artist: I don't have a label behind me. We're seeing so much more of that today - indie artists doing great work but not with a label."

Perry recorded three albums, 'Vision', 'Endless Fields' and 'Ahead' in Nashville with top rate musicians and producers. 'Ahead' was favourably reviewed by Cross Rhythms, suggesting that Perry was "a chap who knows how to craft engaging melodies - often with surging choruses - for lyrics which nimbly avoid both ministry song clichÃ© and the obscure metaphor of would-be poets. Indeed, Perry can take a theme like the need to turn our lives completely over to Christ and find a memorable line (eg, 'at the end of myself is the beginning of you'). A track from 'Ahead', "Unqualified" was remixed by Sean Moffit and released as a single. But it was the title track from 'Ahead', remixed by the album's producer Andy Hunt, which finally landed the songsmith with an international radio hit.

Perry spoke about the "Ahead" song. "It's a song about faith, what faith looks like. Faith is not having everything figured out; faith is trusting God for the next step. He doesn't give me the blueprints for life, but he gives me light for the next step. I take a lot of inspiration from Abraham. The writer of Hebrews says that Abraham, when he was called to go to a place he would later receive as his inheritance, obeyed and went even though he didn't know where he was going. So often in my life, I don't know where I'm going, and I just have to trust God. 'Lord, what's the next step?' I know one thing, that God has called you and me to be a blessing to this world. That's our destiny. But I can't make myself a blessing to the world. Abraham had to walk by faith; he was waiting for that child of promise: it was through that child the blessing would come. He had to keep walking by faith and trust the God who was going to provide that child. I have to walk by faith to trust that God is going to make my life a blessing to my world, because I can't do it. I just have to walk one step at a time into the destiny he has with me. I believe he's got a destiny for each one of us."

Perry is currently planning a new album. He explained, "It's taking some of the great hymns and remaking them in a contemporary style, adding some choruses, some new approaches, but trying to stick with the melodies. Also trying to find those hymns that really get at the grace of God that we see in the cross, and adding this missional dimension to them. When we speak of grace we also have to talk about the need to share that grace."

I finish my chat with this most gracious of gospel communicators by telling him how in the past I've had conversations with musicians and preachers who have told me it can be difficult sustaining a relationship with God when they're so busy with ministry. Perry responded, "That is something every believer has to address. Who is my lord? My lord is not my ministry. My ministry can become an idol, and I often need to repent of that. Jesus is my Lord. That's certainly in my heart, that ministry would be my idol; but the life is in Jesus. Every day I have to remind myself of the Gospel, that Jesus is my friend, my Lord, my King; I'm a man desperate in need of him. Often he's brought suffering into my life to cause me to turn to him. For me it's taken the form of depression and anxiety; and that suffering has caused me to grow closer to Jesus. He's a good shepherd who continues to direct me away from ministry as an idol, and to direct me to him as the lover of my soul."