Peter Brunton: A Dundee-based songsmith with an outstanding debut album 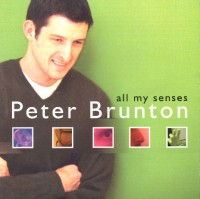 Lins: How did a Dundee boy end up in the holiday capital of the world?

Peter: I was brought up as a pastor's kid, the youngest of four, and as much as I would like to complain about how annoying that can be, I really had a fantastic life. I can only say that it came down to my mum and dad being real people. 28 years into my life and I too am a pastor in a church. It wasn't my original plan, I really wanted to be a graphic artist but, with the sleight of God's hand, I was devastated to be rejected from art college and dumped into Glasgow Bible College on the rebound! And did I have an attitude! I didn't quite agree that I should be studying theology so I had a few spiritual pillow fights with God, ended up with a mouthful of feathers, and here I am in Orlando, Florida where I met and married my wife Crystal.

Lins: How did 'All My Senses' come about?

Peter: I hate saying this, but I knew God told me to do it. I'd been a worship leader and writer for years and was convinced that there were too many other talented people who should make albums. I pretended not to hear God long enough but was inspired by a teacher called John Maxwell and I agreed to "give up to go up". So, I spent nearly all my weekends at the book shop studying everything about songwriting, budgeted for a guitar teacher to push my playing, and aimed to write a certain amount of songs every week and, voila, here is the album.

Lins: With you being based in Orlando and producers Phil and Ross based in Scotland this must have affected the recording of the album.

Peter: Except for the few weeks I had to record my vocals in Scotland, we did every stage by email, MP3s and phone calls. The biggest hurdle was that the finished product is a very personal representation of who and what you are. So when Phil came up with some whacked-out idea like "hey man, wouldn't it be cool if we did this funny sound," I had to rope in my initial fears and let him explore new ideas. The album might have my name and picture on it, but it's as much Ross and Phil's as it is mine. They are on my hero list now and we have a great relationship!

Lins: What's your own personal favourite track on 'All My Senses'?

Peter: Worshiping Jesus is the most important thing to me and I love it when you are focused on just one thing and you know you are lost in his presence. The song that gets me there every time is "How Precious". Helen Burgess has such a soothing angelic voice and her backing vocals really make that song.

Lins: "Today Is Feeling Better" is almost everyone's initial favourite on the album.

Peter: Sometimes I think as Christians we tend to over-spiritualise things and I just wanted to say how happy I was. So I wrote a happy song and I drew from what I love doing, hanging out with my friends. Originally it was meant to sound like a couple of French guys playing the accordion and fiddle on the French Riviera but Phil and Ross turned it into a jazz-come-swing-dance boomer of a song. I wasn't even sure Phil would go along with the song but he had a bigger vision.

Lins: In a nutshell, how would you describe your ministry?

Peter: I'm just doing what I know to do. I am really careful not to present it as a ministry of myself. I am a great believer in the local church and, if I minister, it's because I do it in and through the church that I am a part of. I am passionately vigorous about making disciples. The music I am involved in and the songs I write are only a means to an end for making disciples and passing the message on. I hate the idea of just sitting around and being a Christian with opinions. Jesus wants a fat bride and everything I do must bring more people into the kingdom and get them discipled. This is what I'm trying to do."