Nathan Fellingham talked to Clem Jackson about 'Trinity', the new album from Phatfish and Friends.

'Trinity' is the new album, released this month, from Phatfish - and friends. Yes, this time it's not just Lou and the boys but a range of guests including Matt Redman, Brenton Brown, Cathy Burton, Geraldine Latty, Martin Layzell and others. This is a themed compilation album inspired by the book Worshipping Trinity by Robin Parry with a range of songs all focussing on the triune nature of God. Professor Andrew Walker gives the following commendation, "At last a contemporary CD that puts the Holy Trinity at the centre of worship." And Mark Stibbe adds, "This excellent collection brings a timely and welcome corrective to contemporary worship music." So it seems that the band may have hit on an emerging worship theme and tapped in to a new stream. I visited Nathan Fellingham, the architect of the project, recently to talk about the album.

Clem: How did the project come about?

Nathan: Robin Parry sent me a copy of his book because in it he had mentioned one of my songs "You Are The Lord" from our 'Faithful' album. The song mentions the work of the three persons of the Trinity in creation and there is also another song on the 'Faithful' album "Jesus Christ Holy One" which has a Trinitarian focus. So when I read Robin's book where he talks about a need for more songs that are Trinitarian in nature, I began to think about what could be done.

Nathan: Albums have a profile. If you package things in one place they can have more of an impact. Robin's book got me thinking that maybe we could collect Trinitarian songs and make a compilation album. After all, Robin had mentioned several other songs in the book and, with my two, we were half-way towards an album focussing on the Father, Son and Holy Spirit.

Clem: How did the idea of using guests emerge?

Nathan: It was always the plan; it never really occurred to me to do it any other way. It was never an idea for this to be an artist (Phatfish) driven album. The whole idea was to draw from a wide range of contributors and focus on the theme - to let the songs point to God as Father, Son and Spirit. I heard Geraldine's [Latty] song "Dance Of Our God" which she recorded on her 'Surprising' album and thought that it had to go on! You could tell from the lyrics that she had been very impacted by the doctrine of the Trinity and I think that by putting it amongst songs of a similar nature its strength really comes through.

Clem: As you said, this is not a typical Phatfish album so how do you think Phatfish fans will receive it?

Nathan: Well I hope they like it. The Phatfish boys, including Alan are playing on most of the tracks, Lou is singing on three and Luke and I did the production and mixing on nine of the tracks. I'm hoping fans will enjoy the added dimension that the other singers bring to the project.

Clem: Not all the songs on the album are new - which includes a new treatment of Graham Kendrick's creedal standard "We Believe". What did Kendrick think of it? 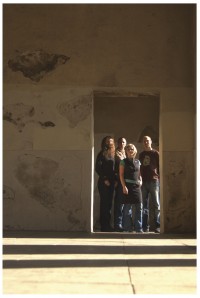 Nathan: He liked it; he gave us the thumbs up. It is still recognisably the original song but with a "fresh" approach. This treatment may well indeed breathe new life into a real classic "statement of faith" song and bring it to the attention of another generation. But it's not the oldest song - "Father Most Holy" is a re-working of 10th century hymn "O Pater Sancte".

Clem: Getting input from friends like Matt Redman, Geraldine Latty, Cathy Burton, Brenton Brown Kristen Getty and Martin Layzell must have been a logistical challenge?

Nathan: Well it required a bit of planning and coordinating of diaries but with the help of a laptop it makes it easier for me to get around to people where they are! So Martyn's we recorded at his mum and dad's house, Cathy's we did at her house and Brenton recorded his own vocal in California and then sent it over on a CDR! We just managed to get Matt's done before he went off to the States and with Geraldine's and Krysten's the songs have been taken straight from their albums so I didn't have to do any work at all!

Clem: What have you most enjoyed about this project?