Phatfish: The UK-based band making waves in the States

Perceived in America as Christendom's answer to Garbage, in fact PHATFISH have been tireless musicianaries since they emerged in 1993. Lukas Willcocks caught up with the band. 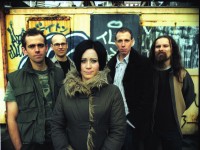 When Cross Rhythms first spoke to Phatfish back in 1994 they were still Purple Phatfish. Clearly the band have somewhat of an obsession with the colour. The title of their best selling album 'Purple Through The Fishtank' may have puzzled the Americans, when the US-financed project was released last year ("like a Christian Garbage" gushed one review) but it made sense to their legion of British fans. It's been a long haul for the group since they first emerged in 1993 to play acid jazz around Brighton clubland. Since then the band's reputation has gradually grown, helped in no small part to their groundbreaking worship sets at the Stoneleigh Bible Week.

I spoke to Phatfish at the Veneration X (Pentecost 2000) event in Aylesbury. The band, Louise Fellingham (vocals), Luke Fellingham (bass), Nathan Fellingham (drums), Alan Rose (guitar) and Michael Sandeman (keyboards) despite suffering from jet lag (they'd just returned from touring Canada) gathered in a small tent after their sound check for the Cross Rhythms grilling. 'Purple Through The Fishtank' has fine production from UK-born, US-based hitmaker Alan Shacklock. I asked Nathan how they'd connected up with the studio genius. "We met Alan years ago through my dad (Dave Fellingham) when he was living in England so when we went to Nashville the first time about three years ago we stayed with him in his house. Then he came over to Stoneleigh Bible Week in 1998 and played guitar with us. It was the year Mike Blow left and before Alan Rose had joined the band. So we got to know him through that.

Michael joins in, "I think he kind of shaped the sound a little bit - there are songs on that album we'd had arrangements to that he..." "Chopped!" interjects Louise. "He was ruthless," adds Alan. "Yeah," admits Michael, "he straightened a lot of stuff out for better or worse." The band erupts with laughter.

So was Alan's plan to give Phatfish a more commercial sound? "Definitely. It has a broader appeal which is what Alan wanted to make it - more accessible to almost anybody who enjoys pop rock music," answers Nathan.

Louise explains how Alan was their contact in the all-important Nashville CCM scene. "Alan was working on another project and was asked if he had any other band contacts and he put a CD into their hands. It was good, exciting. This time last year we were recording it." Nathan continues, "Yeah. Dino Elefante was the A&R man - money man. He let us use his studio in Nashville. So we did see quite a lot of him and he had quite a lot of input.
I asked about how, when Cross Rhythms had last talked to the band there was much talk about the band playing the secular scene. How had the vision changed for Phatfish? "Not that much," responds Louise. "We did it for three years, doing lots of pubs and in one sense we know that people were affected by it but you don't see lot of fruit from it and I guess different doors began to open. When we started out the last thing we expected was to get a Christian record deal but now our eyes have been broadened in terms of what we think that can actually be helpful with. We are getting into churches and then non-Christians are coming in and we are being able to move in a way that you wouldn't necessarily be able to do in a different setting. Although we still do universities and we pretty much go for it in those places as well."

Michael admits their lyrics have become more in-your-face gospel as the years have rolled on. "We are definitely more blatant - in the early days the songs were quite subtle and would talk about positive things, which was fine. A lot of our recent stuff is more worship orientated lyrically - it's much more obviously God centred."

I wonder whether the change in lyrics was as a result of their regularly playing Stoneleigh. Alan responds, "Stoneleigh is part of the heritage of the band, it's something the band does year by year then also what we do in our local church - so we come from that place of leading worship regularly and write and sing those kinds of songs which then overflows into what's happening with Phatfish. It's a part of who we are and what we do."

I ask Nathan whether his dad, Dave Fellingham, the famed worship leader and one of the leaders at Clarendon, the New Frontiers Church in Brighton, had been a big influence. "He certainly has a vision about being salt and light - being a good quality band that can affect people around you - music that has influence by its presence and not just by what you say. We want to be good witnesses in the way we handle ourselves, handle people - the way we behave."

I ask Michael for his perspective on the American CCM scene. "It does seem to me to be similar to the secular music industry - a similar set up and business mindset where everything seems to be about units and attendance (at shows). It can be quite a hard thing to fight against and obviously our heart is not to sell as many records as possible - although that would be nice. But for the record company that really is the bottom line. They are interested in how much you can sell and that is a different outlook than what a lot of Christian bands start off with. But it's easy to get sucked into that mentality when you are surrounded with people who deal with numbers all day long and it's their job to push that and get you on radio."

Louise joins in. "We need to be reminded of what success means to us - and what we are doing this for. Who speaks success over you? Is it people or what God's told you to do? Of course, there is an element of people involved in it - they buy the music - but it's keeping guarded."

"I think it's a dangerous situation out there really," continues Nathan. "The only reason Christian bands can exist is because of God! So if you are doing stuff under that guise and it's all about selling units and making money, then I don't know how pleasing that is to God. The CCM industry should exist to glorify God and to see people saved as well as doing something good in the name of art. There's nothing wrong with that, but if it's not bringing people closer to God and seeing people changed then I don't really understand what the point of it is."

Comments Michael, "I'm sure the record companies, especially the Christian ones, started to serve the bands that were beginning to emerge but it has ended up oftentimes with the band serving the company. You know, how can the band make the company successful? Really, it was never supposed to be that way round.

"I've just been thinking about how people define ministry," continues Alan thoughtfully. "You hear comments like, 'This band has got such a good ministry!', but I wonder sometimes where it comes from. You get bands that are on the road for 200 plus days a year who rarely go near their local church and get home, sleep for a week and then move on again. It becomes like their church which is totally off the wall. It's foreign to us - we could not imagine not being involved in our church because that's the way it's supposed to be. You get people (artists) who get 'bigger' than their church. It's 'their ministry' and it can get separated. The reality is, it's not."

I ask Michael how the song "Holy Holy", much sung at Stoneleigh, ended up on the album. "Yeah, that one has been around quite a few churches. It wasn't our idea to put it on the album but Dino heard them play it in his office one day and said, 'You've gotta put this on the album!' We've never done it as a Phatfish song before."

Before we close I mention that another of my favourites on the album is "Help You". Responds Nathan, "Yeah, I enjoyed doing that song because it was different to what I've done before. It's not just talking about things - more prophetic. From God to us."

The opinions expressed in this article are not necessarily those held by Cross Rhythms. Any expressed views were accurate at the time of publishing but may or may not reflect the views of the individuals concerned at a later date.
About Lukas Wilcocks
Lukas Wilcocks is involved in the King's Arms church in Bedford where he plays an eight string bass in a worship band and gets involved in the church's "ministry to the poor" activities.