Phil Keaggy: The veteran singer/guitarist recalls the Beatles on 'Crimson And Blue' 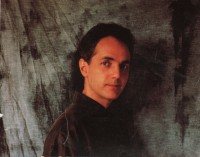 With the release of 'Crimson And Blue' and its CD maxi-single partner 'Revelator' the astonishing 25-year career of Phil Keaggy has finally come full circle. For the musical vocabulary Keaggy employs on 'Crimson And Blue' heavily draws on the singer/songwriter's first and greatest musical influence, the Beatles, while the torrid blues licks heard on 'Revelator' show all the head-to-the-sky guitar pyrotechnics of Cream and Blind Faith. That this most American of musical institutions should have been so heavily influenced by 60s British pop/rock is only one of the anomalies of Phil Keaggy's life and times. Another of the enigmas of Phil's career is that despite holding a reputation among a devoted clique of Christians as the greatest living rock guitarist, Phil remains unknown to the majority of the millions who eulogise the talents of Clapton, Knopffler et al.

It was ironically in the 60s that Keaggy came nearest to mainstream acclaim. His band Glass Harp were highly regarded, touring with many a national big name and making three critically acclaimed albums. By 1972 Phil was wrestling with serious spiritual problems and finally submitted his life to Christ's Lordship. Phil left Glass Harp in 1972 and the following year released his first solo 'What A Day' which spoke about his newfound faith in a variety of styles taking in English folk, baroque and blues-rock. Having emerged onto the burgeoning Jesus music scene the virtuoso guitarist was soon playing, at gigs and on albums, with Keith Green, Randy Stonehill and 2nd Chapter Of Acts. Phil's second solo album 'Love Broke Thru' became a major Christian radio hit while his stunning performance on the live album 'How The West Was One' with the 2nd Chapter Of Acts demonstrated, to the Christian audience at least, that Phil was one of the world's finest and most inventive guitarists.

In 1978 Phil surprised his followers with an instrumental album of largely classically orientated pieces, 'The Master And The Musician'. Over the next 10 years and more Phil continued to give his eclecticism and virtuosity full reign, his albums taking in hook-orientated pop, 'Phl'ip Side' (1980), stylish rock, 'Town To Town' (1981), jazz fusion, 'Play Thru' Me' (1982), folk ambient, 'The Wind And The Wheat' (1987), retro Beatelesque, 'Sunday's Child' (1988) and traces of all these elements, 'Find Me In These Fields' (1990).

To his loyal band of devotees Phil Keaggy is still THE guitar virtuoso whose dazzling technique coupled with a decidedly McCartneyish voice put him in the highest musical ranks. To less devoted followers, Phil is an enigmatic under-achiever who, despite being blessed with more talent than the vast bulk of musicians in the pop and rock arena - both Christian and secular, has produced only occasional album tracks that can truly be called classic. Whatever the case Phil's latest move is a fascinating one. He has reformed Glass Harp and has just completed a 3-month Crimson And Blue Tour of the States with them.

I spoke to Phil some months before the commencement of that tour. I began by asking about the 'Crimson And Blue' sessions. What was different about them from say 'Find Me In These Fields' and 'Sunday's Child?

"Well, there was a lot of spontaneity in the studio. When the tape wasn't rolling and we were working the songs out we would all have a tendency to go off in a jam-mode, whether it was Phil Madeira on the B-3 organ or me on the guitar. We would always be playing around and making noise, then someone would say, 'OK, let's work this out. Let's get back down to business, let's work out the song.' But even once we worked the song out, often times while the song was concluding, if there was a vamp, an outthrow, we enjoyed just playing, on and on. And that's one of the reasons why "Doing Nothing" and "John The Revelator" have such open endings, because we got so spontaneous. The difference with 'Sunday's Child' and 'Crimson And Blue' for instance is that 'Sunday's Child' is a very calculated blueprinted album. We went in the studio with songs and arrangements and stuck to them. There are 13 songs on 'Sunday's Child' and there are 13 songs on 'Crimson And Blue. But 'Crimson And Blue' is a longer album, the reason is we had more spontaneity in general."

Did John add to that?

"Of course he did. Because John Sferra and I grew up playing together.
We grew up jamming and /earning how to play our instruments. He drums as well as guitar and me on guitar, so John and I had some real spontaneous moments in the studio. We just enjoyed playing with each other, playing our instruments, just having a good time. For instance, there were some outtakes that we had done, and one of them ended on the 'Revelator' track. We titled it 'Further Adventures Of...' because it was just John and me. We were kids together. Our moms knew each other, we grew up playing our instruments together with Glass Harp and occasionally through the 80s we got back together to play again and then when we got together with John for the album, him coming down to Nashville, working up the songs, we just had such a good time playing, but not only did we play in the studio, we played at my home. It was a good time."

'Crimson And Blue' finally seems the definitive guitar album Keaggy fans have waited for. Were you determined to make such an album, or is it something that happens once in a while, some kind of luck or providence?

"I really don't know. We didn't set out to make this album the definitive guitar album. Even listening to it now, I'm not entirely sure whether it's a definitive guitar album. The thing is it's a definitive album of songs that incorporate singing, harmonies and guitar playing. It's kind of a balance. It's not like guitar playing magazine or any other guitar magazine would take a selection of albums to review, they would most likely review albums that were primarily instrumental and they had all this flair and all this very intricate arrangements and guitar arrangements. I find that this album is an album with songs for people. It's not just an album for guitar players to listen to. It's not an album that is exclusively enjoyed by musicians, if anything the album would be appealing to a broader base of listeners. It's not in my opinion a definitive guitar album although there's more stretching out on this album. I would say in a lot of ways that 'Beyond Nature' is a very definitive guitar album. Because it's all instrumental. The same goes for 'Master Musician' and The Wind And The Wheat'. The difference with this album is we try to put everything including the kitchen sink in the album, so there you have it."

How do you react to the complaint that your albums didn't reflect the guitar people see here in concerts?

"I think what happens is, when people are at concerts, there is an air of expectancy, there is an atmosphere of enthusiasm. I've listened back to a lot of my live tapes and I've heard a lot of rough edges, whether it's guitar or vocal. There have been moments that have occurred in concert that have been captured on album, only because I lose myself in playing, I'm not conscious of recording. A live performance in concert is a different atmosphere altogether from the studio, but we did manage to as an electric band with 'Crimson And Blue', because we are a group, we are each other's audience. I love listening to John's playing, I enjoy listening to Phil's playing, Wade is a great bass player, we all get stirred and excited when we hear each other playing. Therefore it's almost like an audience." 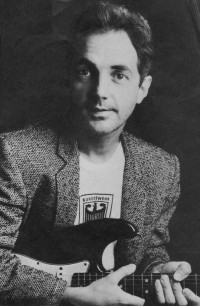 "Yes, if I could get enough enthusiasm from my record company and the people involved with my management, etc. But it takes good planning. To do a good live album you have to record enough dates and be well enough rehearsed, so that everyone's actually comfortable and secure once out in front of a live audience with one or two thousand people. In the studio you have a different sense of security but I think with 'Crimson And Blue' we did manage to capture the kind of things that would happen live. In my past album, on 'Getting Closer', which few people heard, there is a jam on the end of "Sounds" which is the first time in the recording studio where I was not conscious of the light of the recording going on. And I think a lot of this happened on this album. In fact, it not only happened with my guitar playing, but also with my singing."