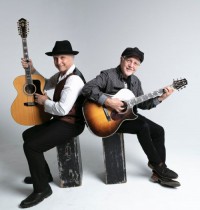 AWARD-winning guitar virtuoso Phil Keaggy has joined forces with multi-instrumentalist, singer/songwriter and producer Rex Paul for a rock album, 'Illumination', to be released by Strobie Records on 31st May. Wrote The Phantom Tollbooth, "'Illumination' puts virtuosity in the context of relatable songs - songs that reflect the artists' hearts as much as their technical chops in a progressive pop format. . . There's a freshness, an energy, a momentum, and an enthusiasm. . . Don't let 'Illumination' escape you - seek it out and enjoy a fresh cross-pollination of the classic and the new."

ILLUMINATION is a KILLER record! It's got all of the things a Phil Keaggy fan could want! Amazing vocals, lyrics, production and fiery guitars. Rex Paul (as a co producer) has brought an amazing amount of life to this album! I have followed Phil's music since 1969, and this is THE album longtime fans have waited for! Maturity in the playing and production! For what it's worth, in my opinion this is as much about Rex Paul as it is about Phil Keaggy. We all know what Phil can do, but Rex is the perfect writing and recording partner for Phil. Every song is a winner on this one!! Fans of 80s YES with big vocals and stellar arraignments will really like it!!