The folk roots movement is flourishing and so are new plants in the orchard, the PINK DANDELIONS. Tim Walker met them. 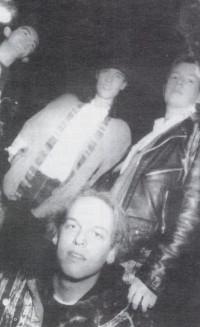 Regular readers of this magazine will no doubt have noticed that some British Christian musicians have been finding that "folk" doesn't necessarily have to have "Fisher-" on the front to make it spiritually acceptable. This discovery has led to the formation of such bands as Eden Burning, The Electrics and Jonathan Day And Eye Of The Storm and many people who have heard these and other similar groups agree that they often equal or even surpass their secular counterparts (in my view, a rare achievement indeed).

Another band in this vein which hopefully will soon be mentioned in the same breath as the above are the Pink Dandelions, a quartet based in Birmingham who have gained much praise and a sizeable following from both secular and Christian quarters since their formation in 1990.

The first seeds from which the Dandelions sprouted were sown in 1988, when Swindon-born singer/songwriter, guitarist and law student Andy Milton met violinist and budding architect Phil Wright, formerly of Bracknell, at Birmingham Polytechnic.

Milton had already made his mark as an able composer and performer, having formerly fronted a straight rock group, State Of Emergency, back in Swindon. However, his change of address coincided with his musical tastes moving in a more folk-based direction, he discovered that Wright shared his burgeoning interest in traditional songs and tunes. The two soon became fast friends, and as 1990 came into view they were performing and songwriting together. The duo's first recording was issued in the summer of that year; the enigmatically-titled EP 'Shadrach Shufflebottom' featured four Milton or Milton/Wright originals stripped down to simple voice-guitar-fiddle arrangements, and the duo found themselves beginning to build followings in Birmingham and their former home towns. Before long the two began looking for a bassist and drummer to expand their musical scope.

Finding people to fill these roles presented little difficulty, as Andy explained: "John (Large - drums) was a mutual friend from the Poly who was looking for a band, and Tym (Kemp) was a friend of mine from Swindon." Kemp, a guitarist whose own band Damascus was winding down, was eager to join the others, although Andy says he "obviously had to persuade him to switch from the guitar to the bass." And so the Pink Dandelions broke ground, albeit without the lofty hopes of many new bands.

As Andy put it, "The band didn't really start with great ambitions - it was just a kind of experiment to see where we would end up." Almost as soon as the band had rehearsed a few songs and played their first gig (in Swindon, September 1990), they locked themselves and an engineer into a recording studio for a week, frequently laying down tracks long into the night. The result of these arduous sessions was the Pink Dandelions' debut LP, 'Painting Colours In The Sand', containing ten numbers by Andy and Phil (including re-makes of two songs first aired on 'Shadrack'). As well as fulfilling their regular roles, Tym and Phil supply backing vocals, John adds percussion and Andy dabbles with mandolin, tin whistle and harmonica. To date the album has sold around 500 copies, almost wholly through publicity at gigs and mail order, and gives a reasonable idea of the band's sound.

On this note I asked Andy what he would say the band's musical influences are extremely varied. On the sound front there's Fairport Convention, Jethro Tull, Bob Dylan, Lloyd Cole, The Cure, REM and the obvious ones like The Waterboys, Wonderstuff etc but as far as the folk influence goes our roots tend to be a bit deeper. Personally I prefer to take our folk influences back to the electric folk bands of the 70s like Fairport and Steeleye Span but we're also strongly influenced by the real traditional music. There's a wealth of traditional songs and tunes which are really worth exploring and it's from material like that, and from the artists that have kept it alive that we take our influences."

Wedded to this interest in traditional material is a strong and practical Christian faith shared by the band members. I wondered how, if at all, the PD's related this to their music. "On a musical level our faith is not really that important", Andy explained. "Obviously being Christians means that we see a lot of issues from a different angle and knowing that God is creator I think gives one a greater sense of wonder about the world around us. To us our faith is more important on a personal level. It's not really something we try to communicate through our music - to us it's more important that we communicate with those with whom we work and come into contact. This philosophy was matched by a conscious decision to work in the secular scene, as opposed to the church hall circuit favoured by many Christian artists; the upshot of this is that "99% of those people with whom we work are people who would not normally come into contact with Christianity - an opportunity which most 'gospel bands' do not have." As a result, you are most likely to catch the PD's at rock venues in the West Midlands area, such as the Hummingbird in Birmingham and J.B.'s in Dudley, and the band have built up a formidable reputation on this scene (they won the 1991 Birmingham Polytechnic Battle of the Bands contest, and are prominently featured in 'The Demise Of The Executive Perambulator', a compilation LP of Brum bands).

The band has also played Christian festivals, including Greenbelt (at the Twilight Zone and the Bandstand) '91 and '92, not only as the Pink Dandelions but also as Glory And The Girl, the moniker for Andy and Phil as a duo. What's more, they have won acclaim for their electrifying stage act and their latest EP 'English Heroes', from sources as diverse as this magazine (issue 11) and 'Brum Beat', which showcases the best gigs in the Birmingham area. Most notably, after the PD's recent slot at the Kingston festival the band have become friendly with fellow folk-rockers Eden Burning, who commented favourably on their set; and the two bands have subsequently been gigging together. The band have recently undergone a personnel change.

Bassist Matt Tildesley was drafted in as a temporary replacement when long-term bassist Tym Kemp left in October. Matt liked the job so much that the temporary appointment has now become a permanent one. A Pink Dandelions gig is certainly a worthy night out. Providing you can catch sight of the band through the seething throng which soon accumulates in front of the stage, the PD's are a feast for the eyes as well as the ears. But what of the future?

"The hope for the band is that we can somehow secure a deal that will enable us to work full-time at something we enjoy very much," said Andy. To this end, 1993 will see them writing, recording and gigging hard as they pursue a recording deal. For what it's worth, in my opinion, if there's any Christian act which deserves to join Mr Joseph and Ms Grant in the secular arena, then I'd say it has to be this bunch of oddly-coloured plants from Birmingham. My question is, how long will it be before someone wakes up and plants them there . . .