Priscilla Jones: New colours of gospel with a touch of 'Prophecy' 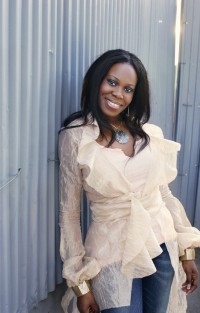 The turntable hits "Joy" and "Lift Him Up" shine the spotlight back once more on one of Britain's finest soul and gospel singers Priscilla Jones. I say "once more" because though the 'Prophecy' album is the first bearing the singer's name, London-based Priscilla has long been regarded as one of the best vocalists in the UK firstly by the British cognoscente who still remember Priscilla's pioneering recordings with first, Jones & Co, then Nu Colours, and secondly by the pop industry who've called on her to back up Robbie Williams, the Spice Girls, Boyzone and a dozen more. Priscilla spoke about her long awaited solo album. "I had worked for others for years and got very comfortable but there came a point where I felt God really calling me to make a start. I knew it would happen at some point but it was a matter of seeking God for the how and when and to join all of the dots necessary. 'Prophecy' wasn't recorded over too long a period, however we took our time with it to make sure it was just right. I wrote 'Lift Him Up' with Nicky Brown. He's a great guy and he co-produced most of the album with me. This was the last song we wrote for 'Prophecy'. I woke up one morning with that 'typical church groove' in my head and couldn't let it go. As soon as I got to the studio I said to Nicky, 'We got to write a song today with this groove.' This song came easily and was a joy to write."

Priscilla went on to speak about her other turntable hit "Joy". "I wrote 'Joy' with a friend called Gil Cang who co-wrote 'Whatever Happens' on the Michael Jackson album. The song came quite easily and so reflected my experience of God's love and hand. Money cannot buy this kinda' love. It hits you like a ray of sunshine. . . even in the dark times when we cannot see a way out. Supernaturally and unconditionally he raises us up. We may have to stand the rain for a while but the 'Joy' is in knowing it'll all be ok in the morning."

Priscilla's parents arrived in the UK from Jamaica in the '60s. Said the singer, "They were very musical, they both read music, played the piano and sang, so music was always in our household. I first started singing from the tender age of three, so my mother tells me, and then continued singing in church as we were there every week! Going to church didn't make me a Christian. I was at an annual camp convention and realised I couldn't live on my parents' salvation. At the point of realisation I gave my heart and life to God."

When Priscilla was seven she wrote her first song. She remembered, "I was playing the piano and instantly wrote a reality song about going to the butcher's shop! It was reggae and I thought it was great until my whole family burst through the door laughing and saying how amazing it all was! I then attempted several other reality songs! Other things happened to me too. At school assembly I would sing but realised my voice was louder and more controlled than everybody else's and that I could harmonise. . .only to be told off by the teacher standing in the aisles telling me to shut up! Anyhow, the real musical experience, after church, was with my family group Jones & Co."

Jones & Co made a bit of a splash on the small but growing British gospel scene and recorded an album for Chapel Lane in the late '80s. Looking back Priscilla remembered the Jones & Co era with fondness. "From aged nine I enjoyed every minute from rehearsals in town at a little rehearsal studio called Sam Sharpe to travelling all over the UK and Europe, to rehearsing at home and mom and dad thinking they were our managers and vocal coaches, to going shopping in the Birmingham Bull Ring Centre to find the next 'dapper' Jones & Co outfit. I suddenly developed a taste for this whole 'singing thing' and quickly developed my writing and arranging skills but wasn't quite convinced enough to take it all really seriously, as I was told. . .education comes first!" 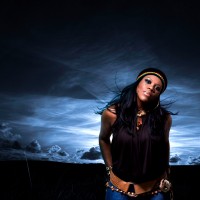 In 1989 Priscilla recorded an album with a kind of spin off group from the London Community Gospel Choir. Given the clumsy moniker Colors Of LCGC, the album 'Man Within' wasn't a huge seller though it did feature Priscilla's lead vocals on several tracks including a scorching duet with Bryan Powell. Remembered the singer, "We had fun, I had a great time meeting some of the UK's finest musicians and singers. It also felt very professional and on a new level as we were singed to Cantio Records. We recorded the album 'Man Within' in Sweden so recording in a new country gave me a fresh spark in my boots too. I remember the day I came up with the melodies for 'Only You' and 'Choose To Stay', it was just a great buzz. 'Choose To Stay' is one of my favourite songs to date."

Out of Colors Of LCGC emerged Nu Colours consisting of Faye Simpson, Iain Luther, Lawrence Johnson and Priscilla. The quartet signed to Polydor Records and for three years looked like the act most likely to break through from the insular confines of black church to the pop mainstream. Wild Card albums 'Unlimited' (1993) and 'Nu Colours' (1996) were released and although none of the singles they spawned broke into the Top 20 (as claimed on Priscilla's publicity sheet) "Desire" made 31 in May '96 and "Special Kind Of Lover" 38 in August of that year. To the loaded question, were Nu Colours a gospel or a mainstream R&B group, Priscilla responded, "We weren't musicians trying to make Christian music about nothing we had experienced or been through, we were Christians simply writing songs about life and our experiences as Christians, and always pertaining to God."

While Nu Colours were still out there pitching for the illusive crossover hit, Priscilla landed a part in the successful stage musical Mama, I Want To Sing. Explained Priscilla, "I performed in Mama, I Want To Sing in 1995. I had done theatre when I was young and was offered a scholarship by the late Sir Laurence Olivier, which I turned down because I didn't want to leave my family nest so young. Before this I had been commuting to London for Nu Colours but as the musical was so full on it gave me that final push to leave my family nest and move in with my sister - in London from Wolverhampton. Distraught about the move but excited about the prospect of a fulltime music career I steamed ahead. I saved money and bought a flat; Nu Colours were recording the album and I was playing a principle role and was also the understudy for the lead role of the hit musical. It was great. At the theatre, I remember some nights we performed we actually cried real tears and couldn't even sing, or really laughing too much and forgetting to come in with a line. In particular I remember when we did a GMTV early morning interview with the whole cast and crew of the opening scene. At around lunchtime the musical director came to me and said, 'You're on tonight, Stacy doesn't feel good and she's lost her voice." I nearly had a heart attack! But I was ready to do this, I had to be, and I did. I also played the lead role whilst Stacy was away on holiday in the US for three weeks! I loved every minute. What a great time."

After Mama, I Want To Sing Priscilla began to do backing sessions for a veritable welter of pop artists. Over the years she worked with Robbie Williams, Jocelyn Brown, Tom Davis, Eric Clapton, Spice Girls, Lighthouse Family, Tom Jones, Craig David, Will Young, Boyzone and Westlife while in the USA she has been a vocal coach for such artists as Kelly Clarkson and Fantasia. But it was a tour with Chaka Khan which brought forth a particular vivid reminiscence. "When I was in senior school we went on a trip for a week to a place called Towers. We did everything from abseiling to canoeing. Every night that we came back to our dorm from our daily excursions we would have a shower, get dressed and go straight downstairs to the green room where we used to play music, sing and dance. I distinctly remember my friends putting on 'I Feel For You' by Chaka Khan and shouting "sing Priscilla, sing!" There was a long riff in the middle of the song they used to love to hear me do. 11 years later I was touring and on stage with Chaka singing the same song! Bizarre."

Priscilla was recently involved in the recording of the Bible Experience, the multi-media version of the Bible which features such luminaries as Denzil Washington, Samuel Jackson and Kirk Franklin. She explained how the opportunity came about. "I was in LA last year doing the GMAs and met a lot of people. One of the executives from the 'Bible Experience' introduced me to the team and they loved my English accent. Before I knew it I was reading from Psalms! I was at Technicolor Studios a few days and was really very nervous about reading after meeting the likes of Eric Benet, Tyrese and Blair Underwood to name a few, but it was a great experience."

A recent encouragement for Priscilla was her nomination in the prestigious MOBO Awards. She commented, "To be nominated for a MOBO is a great feeling. It's nice to know that people are hearing and feeling your music and appreciating it all over the world."

I've been searching since 2013 for the lyrics of Better Days. Could you please upload them

Would love to sing one of Priscilla Jones"s songs: Calvary., but unable to locate any accompaniment trax here in the US.
Can anyone help?

Priscilla, the platform is being set for the world to experience an artist of a difference. Humble, beautiful, caring, thoughtful and genuine, yet a force to be reckoned with. A vocal experience which gets better and better under the purpose of ONE.... Luv yeah W'hampton girl.......

Priscilla,
The Bible Experience is a great audio Bible. It must have been exciting to be part of it. I have the New Testament, but the full Bible is coming in October (check it out at zondervan.com/tbe).

This is a fabulous album.