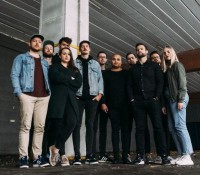 One has to hand it to one of America's largest and most successful Christian record labels, Dream Records. Not only have they searched for outstanding modern worship projects from all over the USA, but they've also kept an eye and ear open for what God is doing around the globe. And so it was no huge surprise when Dream Worship signed the Radiate Worship from Norway to their ever-expanding roster and released the outstanding album 'Come Alive', which Cross Rhythms observed was a project where "the Church couldn't fail to be uplifted by worshippers with such clear electro pop sensibilities."

I spoke to Radiate Worship's Martin MidgÃ¥rd Hagen and, in truth, messed up some of the interview, first by asking him how much touring of Sweden Radiate had done and then, the discographic anorak coming out in me, asking for a full line-up of who was actually in Radiate Worship. After a couple of minutes of this extremely helpful chap rattling off names which to my non-Scandinavian ears sounded completely unspellable, I interrupted and asked him to email me a list. So now it seems quite churlish not to print it, alongside Martin's explanation that some of the musicians are trainees. Here's the list:

Radiate Worship emanate from a church in Bergen, Norway called Pinsekirken Tabernaklet Ungdom, which roughly translated is Pentecostal Church Tabernacle. In 2009, the youth group musicians released their first album under the name Radiate and two years later a second, 'You Alone'. Said Martin, "The first style we did was kind of Hillsongy with a lot of rock. We transcended into a more EDM-style synthy pop. With this record, 'Come Alive', we're heading back to where we started with rock tones and more punch."

When it came to planning a new album Martin and his wife felt they needed to up their game creatively but as any recording artist will tell you, making quality recordings takes time and money. In an interview with Hallels Martin spoke about the run-up to what was to become 'Come Alive'. "Anna and I had a profound experience with God ahead of the production of 'Come Alive'. We were living in an apartment that we couldn't stay in for much longer, as it was too small for us and our newly born daughter. We tried to sell it to get the funds to find a more suitable place for us. We had a real estate agent over, who told us we bought the place for more than it was worth and we would be lucky if we could earn something on selling it. We started praying specifically for every aspect of the process, from selling the apartment to getting a new job. We we're both without permanent jobs, only part-time jobs. Three house-showings went by - NO ONE showed up. We were living in a situation where our own safety-net was gone and we needed to put our trust COMPLETELY in God.

"We took the apartment off the market for 30 days, and put it back on the market for one last showing. Right before the showing my grandma told me (and she can really hear God's voice) that one guy would come and he was going to buy the place. The day before the last showing - this happened. One guy came and asked to see the apartment, and he bought the place for a price we couldn't even imagine. Right at the same time I was given a new job that made it possible to do Radiate Worship as well. Out from this the song 'Trust' was born and from this, Dream contacted us. We are so humbled to see how God has been working when we really trusted fully in him!"

What, I asked Martin, did he feel were 'Come Alive''s strongest tracks? He responded, "Most of the songs are really strong, but I might say 'Constant' is one of my favourites. It's really great how we ended up with that song. We went into the studio and something was not right. We had to change a few parts of the song. When we recorded the vocals, it didn't really fit. We had to re-write the whole song with our fantastic producer, David O Ramirez, from Nashville. It talks about how constant God is throughout life. David is a great producer. We sent all of our stuff over to him - our memos and our demos. He listened through them and used the best in the songs, and he got all we wanted to get out through the songs. He refurbished a little bit. The vision and the central ideas of the songs are still there. It was not a completely new track when we got back his roughs."

Recording the project was not without its challenges. Explained Martin, "Because he lives in Nashville and we live in Bergen, and there's a time difference of seven hours, we had specific times during the day Facetiming when we talked about each song. When he came over from Nashville, the songs were done; it was just for us to record them."

A pivotal change in Radiate Worship's approach came when the group issued an independent EP, 'Released'. There was a dubstep-sounding track on that project, "Colours", and dance music continues to be one of the elements in Radiate's sound. In fact, to my club music orientated tastes, one of the strongest tracks on 'Come Alive' is the song "Lionhearted", released as a single in 2018, which sounds like a worship floor-filler.

Martin is hopeful that 'Come Alive' will open up new territories for the band. He said, "We've been travelling Norway for many years now. We've been to Denmark and to Sweden as well. We can see through our Spotify artist profile that we have a lot of listeners in the USA and the United Kingdom. We're hoping to see how everyone enjoys this new album and are hoping we can do a tour with it."