Speaking as a Jesus pioneer RANDY STONEHILL has survived to become one of the most impassioned singer/songwriters in American CCM. Mike Rimmer grilled Randy about his past, present and future. 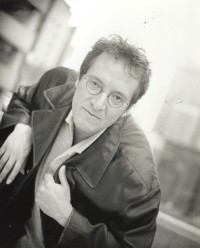 Thirst is the newest Randy Stonehill album. And as I reported in CR45, it's a ten star gem of an album from one of THE pioneer artists of CCM. Famous for his sensitivity and his sense of humour; songwriting and string straining guitar playing, the chance to chew the cud with Stonehill (he's no longer Randy) was too good to miss.

It's been twenty-seven years and seventeen albums since a teenage and scruffy Randy and his musical cohort Larry Norman managed to persuade a frankly affluent Pat Boone to finance his debut album. Unlikely though it seems, Stonehill remembers "We went to his big palatial spread in Beverley hills and the electronic gate opened, sort of officially and the maid led us in to the sitting room and its was just a funny experience because there we were with our long hair past our shoulders and there were Pat's daughters and for some reason they were sitting on the couch according to age and it was like something out of the sound of music. Then Pat came bounding in from the back yard, with his perfect Pat Boone hair, his perfect Pat Boone tan, his perfect Pat Boone smile, looking decidedly like Pat Boone frankly. As we were articulating our vision for what we wanted to do with this music, Pat caught the vision."

Stonehill continues," He said look you're reaching a part of the audience that would never pay attention to me, just like I'm speaking to an audience that would probably take one look at you and go screaming into the night" Boone loaned them $4000 and so Randy's recording career began with what he'd describes as the "decidedly Lo-Fi" Born Twice. It's unsurprising that the album sounds a little raw since Larry Norman also recorded his Street Level album at the same time from the same $4000 budget!!

The album contains Norman's Kitchen where Randy describes how he was saved through Larry's friendship. Randy remembers that he visited Larry, "I walked into his kitchen" he says, "we were going to have some lunch and as he tells the story he just knew that he had to confront me with the gospel and he wasn't really sure how because he didn't want to offend me. So Larry nervously said 'well um how are you doing', and God honoured that simple question which rang through the core of my being." Larry persevered and kept asking if he wanted to pray and eventually Randy caved in and remembers he was thinking "Ok ok! I'm going to know in 5 minutes if the gospel is just the dream of desperate men or if Jesus is who he claims to be. So I said simple prayer and at that time I had your textbook case lightening bolt experience and the spirit of God filled the room so intensely that I thought that's enough I believe! In response to his conversion experience, Randy started writing songs and they ended up calling it Jesus Rock.

I wondered how his family responded to his conversion. Stonehill responds, "I remember calling them and saying mom dad you'll never believe what happened to me" he pauses for effect, " and they didn't! They were stunned and I think they were hoping it was just a phase. It was funny because my father would say things like, 'you know I really like these songs and you've turned into quite a good performer. If you just didn't have that Jesus stuff in the middle of it Randy you could go on the Johnny Carson show!'"

Stonehill engaged in a brief excursion looking for mainstream success with his second album, the British Phonogram recording Get Me Out Of Hollywood. It came to naught and he describes the experience as simply a "21 -year old chasing his rock and roll fantasies". The next album however is probably THE classic Randy Stonehill album, Welcome To Paradise.

He remembers the sessions as "A really exciting, musically fulfilling experience. There always seemed to be a good chemistry artistically with Larry and we just had the sense that something good was happening, I think there was a freshness about the project because in a way it was sort of a maiden voyage. It was material that I had developed over several years. I just remember this feeling of standing at the microphone and just going ok roll the tape and it was so un-self conscious and I think that translates onto tape. I know that people still talk about that record as the foundations of this sort of genre and it's somehow been special and I can't really take credit for that, I just look at it and realise by God's grace, I was in the right place at the right time."

It was Welcome To Paradise first fired my enthusiasm for Randy's music and like many others Greenbelt 79 was the first occasion I'd seen him live as he performed in front of a huge crowd waiting to see Cliff Richard. Stonehill recalls, "That was a pinnacle experience, I mean it was almost other worldly. I remember trying to get my focus and get prayed up for this momentous occasion, and then walking out onto stage and seeing more people than I've ever seen in one place in my life. I really had to laugh and give it up to the Lord because I just realised I can't be more nervous than I am, so I'm just going to try and play these songs for these people and hope that somehow God glues it all together."

As the seventies turned to the eighties, The Sky Is Falling was the next album Stonehill released, again with Larry Norman producing. Again this has become a bit of a classic. The release of the album was delayed because both Stonehill and Norman were working hard as CCM finally took off in the USA. he recalls, "Larry would be on the road touring and promoting his own music, he would come back and I would be on the road and also frankly I was still so young and naive it didn't really dawn on me for a couple of years that it was time to do a new record."

I joke that One True Love demonstrated that Randy had developed a new method of songwriting and he laughs and agrees, "Yeah this one has an odd genesis in that I actually started writing it in my sleep and in my dreams I could see my hands moving on the neck of the guitar so I sort of knew what the chord structure was going to be and heard a melody and I woke up and realised that the lyrics were some kind of subconscious dream speak and probably could not be understood even by me so I let that slide but I sat down at the table with my guitar and started working on a lyric that seemed to make sense with the melody and there we have it."

The eighties saw an increased number of Stonehill albums across the decade with a variety of styles. Some great, some patchy. Released from the slow working processes of Larry Norman's label, Stonehill soon fell into releasing an album a year. One song that put him on the map was Shut de Doh, which soon caught on across the world. "Yeah, it's one of those funny things that spread like wildfire, everywhere I go people know and remember that song. I actually started writing it riding down Sunset Boulevard and there's a lot of ugly and spooky stuff, a lot of lost people, and I remember getting in the car and shutting the door and just saying to myself, oh shut de door keep oot de devil and it just made me laugh so as I was driving, I just came up with that chorus and I would end up singing it in the shower."

He continues the epic tale of the song's conception, "I was on a trip to Norway and I had all these flight delays, I was just stuck endlessly in airports. It took me 2 days to get to this festival in Norway where I was scheduled to perform and so in the midst of my jet lag and my bad coffee breath trying to stay sane and awake I thought I could write some verses that could flesh out that chorus and tell a story and it would redeem the time. So I chiselled away with these verses and by the time I got to Norway I literally fell out of this car and walked onto stage and I thought I'm going to try out this new song on these people! To my surprise they all started singing along and I came back to America and started singing it and the rest is history!

Stonehill's history has been both joyous and painful. As an artist in the spotlight, the divorce from his first wife Sarah was a public and deeply wounding event, looking back Stonehill comments, "I have to say that by God's grace that's ancient history and it feels like someone else's life, another life time ago, so there really is healing and I guess I got through it in two basic ways. First of all I had some peace in the midst of it all in that I had done all that I could in order to save the relationship even when it was so painful to me that all I wanted to do was run away and that was really crucial that I would trust God instead of my emotions." Stonehill did all he could to save the marriage, he explains, "when she refused my best offer I had to stand before the throne of God and say alright so be it."

He continues to reflect, "The other thing interestingly enough was my work and when I was on stage and talking about what I believed, I knew that he hadn't rejected me just because I'd failed so miserably in this relationship and I also found that at least some of my friends and pastors were really there for me. They explained that God is not interested in punitive measures because I failed and encouraged me that I was not doomed to repeat my history but to go forth in grace, and wonderfully enough, shortly thereafter I remarried and I've been happily married to my wife Sandy for over 17 years and we have a lovely 16 year old daughter and a house full of pets!"