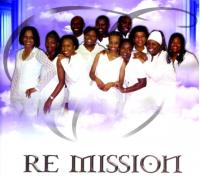 Britain's black gospel scene is renowned for being distinctly myopic, seemingly to believe that all the best gospel emanates from the capital. So, not surprisingly, it's taken literally decades for the Midlands choir Re:Mission to get the accolades their huge talent deserves. But finally the sheer vocal power and songwriting skill of this exceptional choir are at last getting them nominations in those seemingly countless awards ceremonies, much loved by Britain's black church. In the GEM Awards they were nominated for awards for both the best choir and best album for their recently released 'In Your Presence' album though, not surprisingly, in the year that the London Community Gospel Choir had their high profile 'Abbey Road' project out, it was LCGC who won the best choir award.

Says Re:Mission's choir director Steve McGregor, "We were delighted to receive the Best Album award for 'In Your Presence'. We had predicted that LCGC would receive the Best Choir award and we know it was thoroughly deserved. Andrea and Basil Meade, of LCGC, are dear friends and I know how hard they work to promote gospel music. This is where Christian music differs from the secular industry - we acknowledge that our musical gifts are from God and therefore we all work together to promote Christ through music. Awards are great for promoting Christian music but the most important feedback comes through other channels. The most important questions we continuously ask ourselves are: are we being effective, are we changing people's lives, and are we enjoying what we're doing? We certainly do enjoy what we do and the letters we receive and the comments on the website suggest a positive answer to the other questions."

The aggregation's history goes way back. Recounts Steve, "Re:Mission was founded back in 1974 by Dalton Kerr (they were called simply The Remission Choir back in those days). Back then it was a youth choir in a black Pentecostal church in Walsall, who performed every Sunday during the morning service. Most of the team today originate from that fellowship or have very similar backgrounds."

The early years saw the choir building a steady reputation in the Midlands area with occasional overseas trips, though considering the choir's long history there were few opportunities to record though the few albums they did make - 'A Change Is Coming' (1990), 'Melody Of The Heart' (1996) and 'No Delay' (2000) - were all impressive examples of the awesome vocal power of the choir.

Steve explains the recording process behind 'In Your Presence', "We wanted to change the format from our previous live albums and so decided to record some songs in the studio for 'In Your Presence'. Three months before the live event (1st March 2003) where the bulk of the album was to be recorded, we identified six songs that would work better in the live arena. We arranged them over the Christmas period and commenced rehearsals in January 2003. Two weeks before the event, Duke and I laid down the percussion loops in the studio."

Secular choir bands like the Polyphonic Spree have made the idea of large vocal aggregations in choir robes hip. But of course in Christian circles choirs have been around for decades. Comments Steve, "The choir concept never went out of style, as we saw various mainstream artists like Sting, R Kelly, Michael Jackson and Paul McCartney include mass vocal arrangements on recordings. What's been lacking has been the opportunity for choirs to perform and release their own material into the mainstream. However, we have been encouraged to see the success of the American choir, Sounds Of Blackness, in the British and European mainstream markets a few years ago.

I ask Steven what were some of the highlights of Re:Mission's recently completed UK tour. He replies, "Leading worship at the FocusFest Conference in Belfast and our two visits to Chelmsford in Essex were definitely highlights. However, the best part was the live recording of 'In Your Presence'. The audience were amazing and it was so inspiring watching them enjoy the music. On the night we had a paying audience, so they deserved a polished performance, and we worked very hard to ensure that. During the planning stages I informed the team that it was my desire to capture the spirit of the live event on tape and the only way to accomplish this was to minimise overdubs. This approach put the pressure on but it was good to see everyone rise to the challenge."

There is now a major event coming up for Re:Mission. In October 2004 the choir will be playing a 30th anniversary event. They'll be inviting friends and former members, including founder Dalton Kerr to celebrate the occasion. This will surely be one of the gospel events of the year.