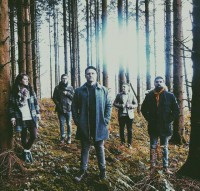 It's been a momentous year for Bangor's Rend Collective. The band recently gigged at New York City's Madison Square Garden, Denver's Red Rock Amphitheater and Sacramento's Sleep Train Arena. The band are set to rejoin Chris Tomlin on the second leg of his Love Ran Red tour in a few days but lead singer Chris Llewellyn found time to speak to Cross Rhythms about their new album and living as family.

Tony: Congratulations on 'As Family We Go' getting to 19 in the UK's mainstream album charts. Were you guys jumping up and down when you heard the news?

Chris: I'm not sure what we were supposed to be doing - trying to come up with a more spiritual response - but there was fist-pumping and all of that. It's really special for us to get acknowledgement. The UK has been with us on this journey for an awful lot longer than our friends in the States have, and it's always nice to know people haven't abandoned us, and they're following us as we change our sound.

Tony: That change of sound has brought some critics.

Tony: I'm surprised you're still talking to me.

Chris: Well. six albums in, and Cross Rhythms have said nice things about five of them, so we're OK with that.

Tony: Would you agree that some of the folk music elements have disappeared on 'As Family We Go'?

Chris: There was an intentional dialling back of some of that folk stuff. We want to retain the idea that we're not just a folk band; we define ourselves as a celebration band. We were Rend Collective Experiment in the start, and that gave us this licence to dabble in folk music, dabble in electronic, dabble in pop; and I think we always want to remind there's something worshipful about all the different voices you can have as an artist. It's not just the campfire thing that's authentic: the larger pop arena sound can still be from a very authentic heart, still carry that campfire feel. We didn't want to get stuck in a mode. Having said that, we don't want to abandon the folk sound the way Mumford & Sons have done. But at the same time, if something's alive it's got to grow and change.

Tony: How would you describe the change musically? What elements have you brought in?

Chris: In some ways we're just adapting to the different contexts we're in. When we first started - not that it was any better or worse - we were in a lot of small environments. Folk music works great in a small pub: that's what it was really designed for. For that environment, that's a great sound. You develop different sounds for different rooms. Now we're playing in some of the larger rooms with different artists. My goodness, Chris Tomlin can fill some of them! We're just trying to find a sound that matches that environment. Songs like 'Free As A Bird' off the record are kind of a marriage of the two things: it's folk music but it's folk on steroids, trying to match the size of the room.

Tony: What studios did you use when recording 'As Family We Go'?

Chris: We actually didn't record in a professional studios at any point. We've always loved to record on the road, so really it's just a laptop and some room in a venue or a church. We've recorded in a lot of nurseries.

Tony: Really? You must have a very expensive mic.